Donald Trump is fit to be president

I am not among those who consider Donald Trump a perfect soulmate. For example, his opinions about protectionism seem potentially counterproductive to me and there are other reasons why he shouldn't be considered a pro-market conservative. His way of talking is arguably closer to a very self-confident ordinary man than to a deep intellectual and I often prefer the latter. 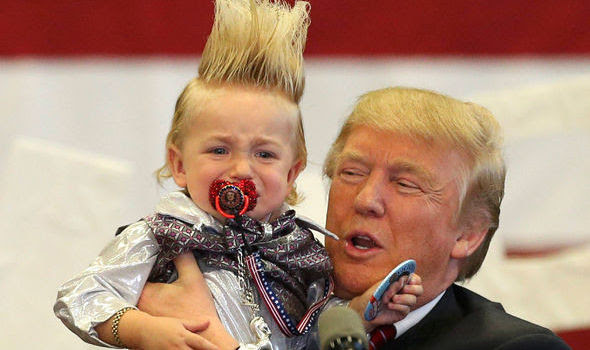 But as you know, there are lots of reasons why I think he represents a potentially great improvement. It's much more important what the majority of the American voters will think, of course. The previous sentence is one of the very basic points that seem impossibly difficult to Terry Tao, a Fields medal winner, who wrote the following text


which made me downgrade him to a Fachidiot (or, to be sure that my Austrians understand me, a Fachtrottel). I just can't preserve my broader intellectual respect for Dr Tao after I read this stuff. In the words of one of his readers, he transformed himself from an intellectual to a poo-slinging monkey.


What did he do? He decided to criticize Donald Trump in a way that sounds like rigorous mathematics. In particular, he defends:


Proposition 1. The presumptive nominee of the Republican Party, Donald Trump, is not even remotely qualified to carry out the duties of the presidency of the United States of America.


And Tao wants to treat this assertion as a mathematical lemma – and probably indicate that he, as a well-known mathematician, is qualified to choose the right future U.S. president as long as phrases such as "propositions" are being used.


This is so incredibly stupid at so many levels that my perception of Tao as a thinker cannot avoid a dramatic transformation.

First, you should have some idea what a rigorous proof in mathematics looks like. For Tao, some critical words about Trump from Hillary Clinton and Mitt Romney seem sufficient to "prove" the proposition. Donald Trump says tough words about Hillary, too (for example, Hillary belongs to the jail; many Americans surely agree with this observation) – something that Terry Tao hasn't been capable of incorporating into his "proofs" yet.

Tao combines his absolutely superficial anti-Trump assertions with the stories about the emperor's clothes and with convoluted ideas saying that "everyone knows that everyone knows" and similar crap that has absolutely nothing to do with the heart of the issue, namely the U.S. presidential elections. This crap could be used for a similarly superficial discussion of any other topic you can think of.

For decades, I've been rather attracted to the idea that smarter or more achieved people (whatever the exact rules are) should influence the results of elections more than others. But you know, the problem is that Terry Tao clearly isn't smart when it comes to politics. I am absolutely certain that he is vastly less smart on political issues than the average supporter of Donald Trump.

Just think about his claims and his methodology. His main proposition says that Donald Trump isn't qualified for the presidency. Is it true, is it false? There's obviously no sharp, mathematics-like way to decide. There may be various aspects of the "qualification" and different people have their own subjective opinions on whether Donald Trump satisfies each of these criteria or not.

So the idea that one can turn these questions into mathematical propositions is just downright preposterous. The operators that Tao uses can't even be defined, not even remotely. But you know, in a democratic or republican system, there is still one definition of the "qualification" that is much more important than others and it's the following:


A candidate becomes qualified for a political chair that is directly elected by winning the elections.


It's that simple. It's the majority of the voters that decides whether someone is qualified and the successful result of an election is a "stamp from the voters" that makes someone officially qualified. Assuming that he isn't just an Australian citizen, Terry Tao's opinion is an opinion of one voter – and not a politically mature one. The suggestion that the number of votes isn't the most important litmus test for the qualification of the candidate is nothing else than an assault on the basic principles of democracy. If Tao had some deeper analysis or a strong argument, maybe I could agree that it may be as important as (or more important than) the number of votes. But Tao has absolutely nothing intelligent to say.

We don't know whether Trump will compete against Hillary and who will win. But we know that Trump is a presumptive GOP nominee (who will probably be nominated by the party) which means that


the GOP voters have decided that Trump is the most qualified candidate for the U.S. presidency.


By his self-evident misunderstanding of these basic facts, Tao basically shows that he isn't familiar with "Politics 101" that many kids learn already when they're in the kindergarten. Tao may invent dozens of low-brow insults such as that "Trump is petty" and "Trump is ignorant about policies" and millions of other things like that. But it's still a fact that if and when Trump wins the elections, he will be "officially qualified" to become the U.S. president.

What I find remarkable is Tao's combination of the implicit claim that his evaluation of Trump is more rigorous than the evaluation by others with the absolute cluelessness about politics that Tao has demonstrated in his rant. Tao just hasn't discussed a single political issue that matters; his text is nothing else than a collection of insults that he could address to anyone whom Tao dislikes. He tries to debate those who may be tempted to choose Trump as the "lesser evil". But he is completely overlooking that at least tens of millions of Americans are actively and rather enthusiastically rooting for Trump. And they have many rather important reasons for that such as:
There are other reasons; I won't ever claim that I have exhausted all forces that influence politics. Different Trump supporters may formulate the reasons why they support Trump in different ways. But whenever Trump brags or says that some plans for his presidency are important, there are lots of U.S. voters who simply agree with him.

But what's amazing is that Tao isn't discussing – and maybe, he isn't even willing to discuss – any of the political issues at all. He doesn't want to care whether Trump is right or whether most people in the U.S. agree with Trump or not. Tao seems to think that a few cheap insults such as "unqualified" and "petty" combined with some would-be mathematical jargon are more important than the actual political and personality issues and values and dreams. Sorry but it is not more important.

Terry Tao is absolutely detached from the issues that matter to the American voters, he is detached from politics, he is largely detached from America's life. But he's still arrogant enough to think that with some would-be mathematical terminology, his cluelessness may be sold as a superior analysis of the U.S. politics. I think that the comment section at Tao's blog shows that it can't. Almost everyone sees how deeply flawed Tao's attempts to axiomatize politics are, how shallow his insults are, how he has nothing to do with and nothing to say about the values and political issues that matter.

I believe that many opponents of Trump must start to see how incredibly empty most of these attacks against Trump are. I believe that even many voters of the Democratic candidates feel some compassion for Trump and they start to see that he isn't being treated fairly. Many people may become aware of the bulldozer of the would-be "establishment" that just mindlessly runs over all inconvenient people. I can't tell you whether Trump will be elected the U.S. president but he may very well be elected and become "officially qualified". And he may also become a great president, perhaps similarly to Ronald Reagan who had been forecast to be a failure in rants very similar to Tao's rant but who proved all those rants entirely wrong.

And one more point: as many Tao's commenters point out, his "emperor's new clothes" fable is upside down. In reality, people at many places seem to be under the pressure to pretend that they are anti-Trump but they actually prefer Trump.

This cute boy, Logan Autry (9) of Fresno, California, became the latest victim of the politically correct bullies who prevented him from wearing his favorite red hat. It's the same schools where mass killers such as Che Guevara are just fine on the T-shirts – but a red baseball hat, a typically American part of a dress that may become an even clearer symbol of America if Trump wins, is apparently not politically correct. It was a "distraction" according to some local school officials. The "problem" was ultimately solved when Logan's family's dog, claimed to be a Trump supporter (really?), half-destroyed the hat.
Luboš Motl v 11:32 PM
Share