Here, you could have learned the details in advance and watch the event live

Tonight, at 19:15-20:15 Prague Summer Time (or, locally, 10:15-11:15 am PDT), you could follow the webcast here (video) of the new findings by LIGO. Because the most recent detailed rumors I was spreading were absolutely accurate, it may be a good idea for the dear readers to trust the exciting report below (update: the data were accurate again). The paper was released while they were speaking, PDF. 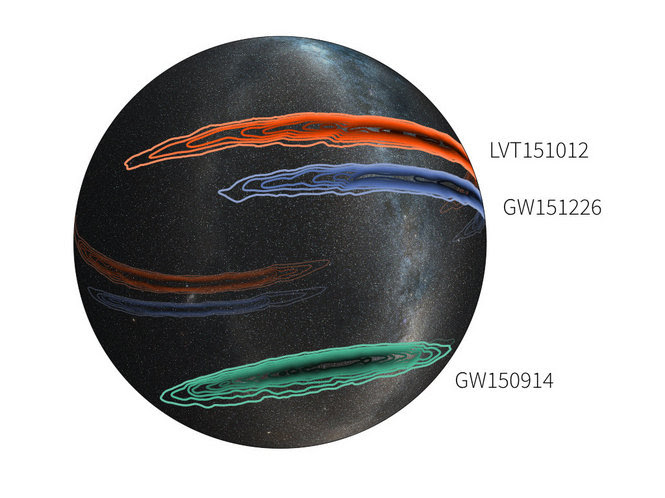 Ladies and Gentlemen, one additional gravitational wave has been discovered at the 5-sigma confidence level in the first observing run (O1) that ended on January 12th, 2016.


Recall that the first gravitational wave (GW) directly detected by humans arrived on September 14th, so it's known as GW150914. It was a black hole merger of 2 black holes with masses 30 and 35 Suns (newest mean values), respectively.


That discovery took place very quickly. So these black hole mergers shouldn't be "terribly" unusual. And indeed, roughly one per month could have been detected with the sensitivity that was available during O1.

A paper about all three.

Aside from the well-known GW150914, as I already mentioned on February 13th, the LIGO apparatuses were also excited by LVT151012.

The October 12th event wasn't observed at the 5-sigma level. Instead, the confidence was lower and the false positive rate was "one false event in 2.3 years", not thousands of years you should demand here (or 2% probability of a false detection). At any rate, the LVT151012 (LVT stands for Ligo-Virgo-Trigger, meaning that the gadgets instinctively reacted but it wasn't enough for a GW discovery) was very likely due to a black hole merger as well. The masses were 13 and 23 Suns (plus minus 50%).

However, one new gravitational wave did make it to 5 sigma, namely the vibration GW151226 detected during Christmas. Louisiana got the signal just 1.1 ms before Washington. The event took place 1.4 billion light years away, a bit further than the first discovered wave. The black hole masses were significantly lower, 7.5+14.2 Suns going to 20.8 Suns; about one Sun "evaporated" to waves this time. The peak luminosity exceeded the light from all stars in the visible Universe.

At least one of the initial black holes' spins exceeded 0.2 (times the maximum, extremal value); the final black hole is estimated to have the spin of 0.7. The frequency of the sound was therefore by about a factor of three higher than it was in the well-known GW150914. Shockingly enough, they could hear about 30 last orbits of the binary! ;-) But they don't have too regular a shape. One has to integrate the sound over the whole relevant time to achieve a sufficient signal/noise ratio – and the relevant time was as long as one second now. (That's because one of the black holes is much lighter.)

A video (cartoon) of the orbiting.

I am running my personal gravitational wave detector, the LUMIGO, built from ingredients from a grocery store for $29.90 (the real LIGO is more expensive because they also have to pay all the feminists and overhead), so I could detect the waves as well. The picture at the top shows the celestial map with the locations of the three gravitational waves we just discussed.

LIGO is currently not taking data. They are upgrading it to increase the sensitivity by a factor of 1.15-1.25 or so. Because the signal is inversely proportional to the distance and the volume is distance cubed, this improvement means 1.5-2 times increased frequency of the detections.

Virgo in Italy has an imminent restart, Kagra in Japan soon afterwards, and LIGO India should join at some moment. After black hole mergers, they want to see neutron star mergers – which also create light of all wavelengths (plus perhaps neutrinos) at the same moment.

P.S.: I think that they failed to answer some questions in the debate. For example, it's perfectly sensible to expect that the black hole mergers are the easiest to detect and so far dominate. Among objects of the same mass, they are smallest so they can get closest and therefore emit strongest waves. But they say that they're still searching for the other events in the old data.

This 100-million-views video isn't here because of the Mars landing but because oops, they did it again. ;-) Hat tip: Clifford Johnson