Did two Czechs hack into the ice-hockey championship in Moscow?

Was a fake mascot watched by millions on the ice? 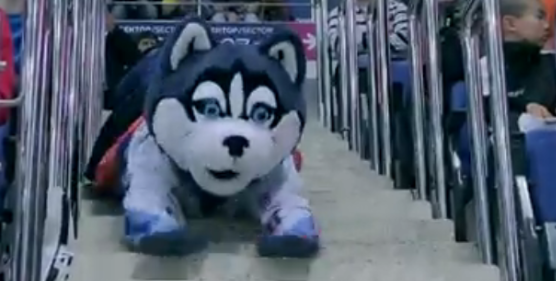 Kazma Kazmitch (born as Kamil Bartošek) is a 31-year-old Czech entertainer who currently produces his "One Man Show" at Stream.cz, an Internet TV owned by Seznam.cz, the formidable Czech (local) competitor of Google. He and his teammate – and their staff – have done similar things in the past (most famously, they squeezed a fake Jim Carrey into the Czech counterpart of the Oscars ceremony – world media responses) but this trick sort of makes David Copperfield look like a baby pacifier in comparison:


The video above shows what they did. Or what they claim to have done. It sounds incredible. Kazma agrees – it's the point of his show to do things that look incredible – but he claims (also e.g. in this interview) that all of the stories are absolutely true and nothing was fake. He gives a way of thinking that I find powerful: Shouldn't the critics who say it was fake show their alternative explanation of the events that allowed the videos above to be recorded?


OK, what did they do? They managed to place a person who shouldn't be there at all – Kazma himself – at the ice during the ceremony after the first Czechia-Russia match in early May 2016 in Moscow. How could he get there? He got there without any Russian visas etc. – as the "Laika the dog" mascot.


We're told that 2 weeks before the championship, the mascot was shown to the world public and they hired someone to produce a replica of the mascot. They needed to get to the ice. Škoda Auto has been sponsoring the ice-hockey championships for quite some time. So they found out which two Škodas were scheduled to be sent to Russia. They needed to get into the car (2 men), along with their luggage which contains their replica of the mascot.

So they got into the Škoda Auto corporate parking lot in a dumpster car. A computer counts how many people get in and get out, so they used inflatable male dolls to get out. These two guys were traveling in the trunk of a Škoda car for 4 days, we're told and partly shown. The car was inside a truck, they ate self-cooking potatoes, drank water, pissed into PET bottles, made a poo into PET bottles cut in halves, and masturbated while the other guy wasn't watching.

Finally, the Škoda car got to the stadium one day before the championship began, they hid from a janitor or two. Kazma took the replica of the mascot on his body, and then he claims to be "the" Laika that was being shown the whole day. He was wildly playing with the audiences and (if the video wasn't edited) he was swearing in Czech the whole day. They were also sticking a logo of the show, a downward pointing yellow triangle, everywhere, on the Russian coach, and so on. We are shown that they were playing and taking pictures with Putin's bodyguards and things like that. It's really an amazing story if true – tricks that James Bond and David Copperfield are too down-to-Earth to invent.

In later interviews, we're told that Kazma returned to Czechia (without any visas) using a cargo ship. A week ago, a 10-minute report (?) about this trip back was released. In that newer video, they burned a Zhiguli they bought and Ivo Lukačovič, the founder of Seznam.cz (whom I knew in person in the 1990s), went to Russia with his red helicopter (Eurocopter EC135 P2, he has really owned it since 2010) and took them back to Czechia while they burned the old Russian car. ;-) So obviously Kazma has lied at least once. It was either a cargo ship or a helicopter (or neither).

Needless to say, the video has a few million views and there correspondingly exist lots of skepticism on the web. I am not quite sure what to think. When I read the skeptical responses, I could agree with several points. For example, it seems more reasonable that the Škoda cars were taken from a local (Russian) seller – and not transported directly from the Czech producer's parking lots. But it's not something you could be certain about. Second, Putin didn't attend the Czechia-Russia opening match, as Kazma basically seems to claim, because he was just greeting the Japanese prime minister in Sochi. (Good for him, Czechia prevailed 3-to-0.)

But it wouldn't be easy to fake all the video scenes. I do think that they're basically from the right places. It seems sort of plausible to me that the achievement was completely genuine, just like Kazma claims. But it seems somewhat more likely to me that all the video sequences were shot with the permission of the organizers who got paid by Škoda Auto – and Škoda Auto de facto organized the production of this whole fake video. So the whole film could have been produced at the right places but without any risk.

If it's possible to fool the Russian border guards, Putin's bodyguards, and many others, it would mean that there are certain additional security risks. Fortunately, Kazma only loves to do brutal but non-lethal pranks. You can imagine what an Islamic terrorist could do if he dressed himself as the mascot and got onto the ice. Fortunately, Arabs don't "make anything", if I borrow some words from Obama, so there are no Arab cars etc. standing in the stadiums during the world championships. And pranksters from countries that "do make things" are usually not coldblooded killers. But maybe such things could happen.

What do you think? Was the adventure real? I must say that I am impressed and inspired by it even if it were fake. Even as a fake video, it's incredibly clever – perhaps equally clever as if it is real. That's one reason why I am not abandoning the possibility that the video is actually completely real. And even if it was fake and Kazma is lying into our eyes, he's still incredibly creative.
Luboš Motl v 3:56 PM
Share