Italy's attitude to migration is totally insane, too

In 2015, over one million migrants have arrived to the EU through Greece, a failed communist state that remains a member of the EU. The Balkans route was sealed – but it was not a sign of the effectiveness of the EU. A small post-Yugoslav country of Macedonia which is not a member of the EU (and which Greece doesn't even recognize under its own preferred name) has simply closed the border and fixed most of the problems that the likes of Angela Merkel have created. A map with Italy and Libya

Because they can't arrive through the Balkans, the importance of the Italian route for the illegal immigrants went up. Hours ago, the media told us that


The report – which, according to the comment sections on Czech news servers, has totally shocked the Czech public – says that Italy's navy is picking the people from boats directly near the beaches of Libya. In a sane world, the navy would be transferring the illegal immigrants from Europe back to Africa.

But the navy under the Italian social democrats is doing exactly the opposite: they are sending Italian ships to kidnap Africans and bring them to Europe. PM Matteo Renzi should spend years in prison for kidnapping and the kidnapped Africans should be immediately returned to their countries and families. 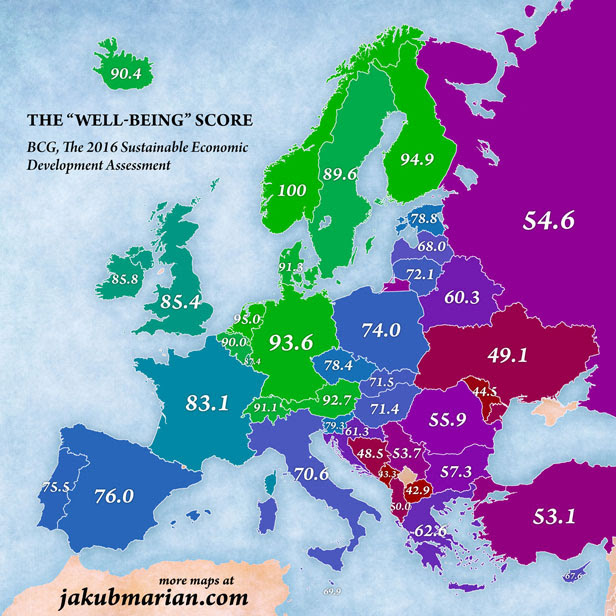 Italy's well-being is already worse than in 2 of 3 Baltic countries, every Visegrád Group country (CZ, PL, SK, HU), and Slovenia. That's quite an achievement to waste the advantages resulting from the avoidance of communism. But comrade Renzi probably feels that they haven't f*cked up the country that used to be the core of the Roman Empire sufficiently yet.

(Czechia, Estonia, and Slovenia stand above all the Southern PIGS in this map. The greenest countries are those considered Nordic-Aryan by an inhuman ideology. Macedonia which I am praising in this text has the lowest score on the map, even below Moldova, but that's probably because Kosovo doesn't even report any number. Ukraine is worse off than Russia.)


The distance between Sicily and Tripoli, Libya (see the map at the top) is some 500 kilometers. So the Italian navy is actively sending its ships 500 kilometers away from its land in order to kidnap the Libyans and Africans and in order to make the European problems with the immigrants worse. It's just unbelievable to me – and almost all my compatriots, not to mention many other European nations.

Those 500 kilometers of sea in between Italy and Africa are there for a good reason. It isn't supposed to be easy to swim over these 500 kilometers or sail in amateurish boats. One may see that it's pretty much suicidal so obviously, lots of people doing this thing kill themselves. But what kind of a policy is to pretend that the Mediterranean Sea – this barrier that Nature naturally built to defend the European civilization from a non-European civilization – doesn't exist? The European civilization could only evolve because it was shielded from the mostly hostile influences of other continents by the Mediterranean Sea, Ural, and Caucasus. The Italian "saving" policy is analogous to sending buses to pick thieves and driving them to the best shops so that it's easier for them to steal whatever they like and then driving them back home. The Italian politicians are just complete psychopaths.

It's really ironic that the Italian navy has the balls to go to the Libyan coast. When many of us were saying that these people should simply be brought back to Libya or countries where they apparently came from, the response often said that it's too dangerous for Italian or Greek ships to get close to the Libyan and other coasts (to return the migrants). But when the task is to kidnap the migrants and bring them here, it's apparently no longer dangerous or controversial! This is another great proof that all the excuses by the pro-immigration folks are pure nonsense.

The contrast couldn't be sharper. Today, Czech left-wing president Miloš Zeman gave an interview to Blesk TV, an Internet TV run by the most important Czech tabloid Blesk (=The Flash). The interview's name is "With President in the Lány [Chateau]", a rural home of the Czech presidents since 1918.

He said that the fence around Czechia could be a good idea – some other countries such as Hungary and Macedonia have completed that job and a barrier is being built in between Italy and Austria. Zeman also expressed the opinion that the migrants who don't get the asylum in the first EU country where they apply for it – which is most of them – should be deported.

Also, the funding for Muslim groups coming to the EU from foreign countries should be stopped and banned, Zeman recommended, and radical imams should be deported – even the softcore welcome-culture prime minister Sobotka has voiced his support for this policy a few days ago. The Czech leader has urged Germany to reevaluate the Wilkommenskultur. He has expressed his understanding for Hollande who has cancelled his visit to Prague twice – the visit was supposed to occur one day after a major terrorist attack in France in both cases. They will meet in Rio, anyway, Zeman assured us, because Zeman isn't afraid of "Zika the mosquito". ;-)

Zeman who likes to say that "only an idiot isn't changing his opinion" has also changed his opinions about the legally held arms. He used to be rather negative about those. But "right now, the citizens should arm themselves against the terrorists," the Czech president's recipe said. After all, his wife has just earned her gun license and bought a revolver – congratulations. Zeman wants to make the guns more accessible for the citizens.

Because it would be foolish to assume that Czechia is immune against terror (although Zeman expects the terror here to be imported – by task forces that arrive from other countries), we've been told that some extra money will go to the protection of places with many people in Prague – the Prague Castle, the main train station, and the subway system. "I won't tell you which anti-terror facilities are gonna be installed in order not to make the terrorists' hard work easier," he wittily added.

We should be ready that Turkey will pump 2.5 million Syrians from its camps to Europe. According to the German intelligence services as interpreted by Zeman, 1 million migrants from Syria includes "15 thousand very dangerous individuals" so we should be getting ready for new terrorist attacks. Should we be getting used to the terror, like the Israeli did, the journalist asked? Zeman answered that it's better to be ready for terror than to be killed by a terrorist. Well, if the question were posed in this way, the answer would be easy, indeed. ;-)

I, for one, have gotten used to the approximately weekly reports on terror attacks in Europe. This is a part of our new normal status quo and I think that we are gaining some practical understanding of the fact that these acts are sad and disturbing but they are also (so far) extremely far from threatening the basic well-being let alone existence of the European civilization. Moreover, some recent attacks indicated that the terrorists are gradually running of the capability to perform spectacular attacks. I hope that they won't prove me wrong in the near future.

But you may see that the intra-European rift concerning the immigration policies is deep and fundamental, indeed. The attitudes of countries like Czechia and Italy are diametrically opposite to each other. The disagreement may morph into a rather brutal physical conflict. So far, all such tensions have been largely cooled by countries such as Macedonia – which returned much of the mass migration to an academic problem again – and our thanks go to them. But if Italy really plans to systematically save/kidnap one million of Africans per year (that's the rate from the report at the top) and inject them into all of Europe, you may be sure that other European nations will think that it's an act of war. This is not a funny business.

Zeman was also surprised by the huge extent of the purges in Turkey. He believes that the lists of the people who were arrested were prepared in advance but he refused to speculate on whether the whole coup was a false flag operation.

Incidentally, the first Czech citizen was found with the plans to join Daesh which he has confessed to. The man probably from the nearby Pilsen-South district was caught at a Turkish airport in January (with an air ticket to Syria) and is expected to serve 3-12 years. I guess that in Germany, the same man would get an audience and a selfie with the Chancellor.
Luboš Motl v 4:36 PM
Share