I think that the Western European and U.S. mainstream media almost completely fail to inform the public about the basic facts concerning the ongoing migration wave. The situation is better in the Czech media.

The Ruhr district – the true Germany – in red.

It's been known that the Muslim migrants basically want to live in Germany – nothing else is good enough for them. According to the evaluations by the migrants and the geography as envisioned by the migrants, even Austria, Switzerland, Denmark, Benelux, Scandinavia etc. either fail to exist or they suck. However, the situation is a more extreme farce than that.

A significant fraction of the migrants don't want to live just in "some Germany". Instead, they want to live in the "true Germany". What does it mean? Well, the true Germany is the Ruhr district, a highly populated region in North Rhine-Westphalia. Roughly 10 million people live on less than 5,000 square kilometers over there, around cities like Dortmund, Essen, Duisburg, and Bochum.


The Muslim migrants have been given an invitation from Angela Merkel who is said to be the boss in Germany. She may be satisfied with the life in Berlin but she is just a 2nd category human who doesn't even wear a hijab. It's clear that millions of the Muslims deserve better. They deserve the true Germany.


You may see how immensely separated from any notion of a reality the ideas about the incorporation of the Muslims to Europe have become. Most of Europeans don't want these significant shifts in demographics. But a huge portion of the migrants don't want to live "just somewhere in Europe", either. They ultimately want to move to the Ruhr district, the new Mecca-and-Medina, less than 0.1% of the European territory.

And the likes of Merkel want to promote such self-evidently absurd wishes to a new human right. I am sorry but Muslim foreigners don't have the right to live in the Ruhr district. Or Germany. Or the EU. Without a valid visa, they don't even have the right to survive their attempt to cross the EU borders.

To give you some hard data, let me translate a fresh article from the center-right top-read iDNES.cz:

"True Germany" has run out of patience: refugees will be sent where they belong according to the quotas

The industrial hubs in North Rhine-Westphalia have decided to expel those refugees who weren't explicitly sent there by the government. It means that those asylum applicants who are supposed to live in East Germany or smaller cities according to the intra-German quotas must leave. However, these migrants often move towards the Rhine River with the explanation that they want to "the true Germany".

[A picture of a male and female Muslim migrant.]

"Return the keys from the apartment and go to Saxony [an East German land] to ask them for housing." A similar order will soon await about 2,500 migrants who recently found their new home in West German Essen [Ruhr district]. According to the WDR radio station, the city hall in the half-a-million city has decided that who wasn't lucky in the "lottery" and didn't end up in North Rhine-Westphalia, he has no business to stay in that land.

Transfers to a Bundesland where they didn't belong have so far been tolerated. WDR mentioned the story of a Syrian physician who moved from Thuringia [another East German land, in the middle of the Iron Curtain] to Bochum in the Ruhr district. At that moment, his asylum application was already approved so he could legally move across all of Germany.

The employment bureau in Bochum has even found an apartment for him. However, after 3 months, he has to check out and return to the poor and forest-covered Thuringia.

A new integration law is the reason. From early August, officials are allowed to prescribe the home city to the migrants for up to a 3-year-long period. However, the federal Parliament has made these rules retroactive, from January 1st, 2016.

It means that the city halls may expel those who were welcome in the first half of the year and began to integrate into the society. Including those who have already found a job or registered their kids in kindergartens.

A substantial part of the refugees who came to Germany in 2015 is illegally employed and the conditions are often lousy, the NDR public radio told us.

Illegal jobs may be performed by up to 30% of the 1.1 million refugees who came to the country last year. It's hard to get precise numbers so they are estimates.

According to the radio station, these illegal workers are ironically often given these illegal jobs by visitors and sometimes even the very employees of the refugee centers.

This work is usually not compensated too well. The migrants are often working as janitors, washers of dishes, and painters of rooms.


Dreams about Cologne and the Ruhr district

Since January, only Essen has dealt with 1,662 registrations of those Muslim migrants who should have belonged to different Bundeslands according to the law. The city hall decided to be generous and only expel those migrants who came after August 6th, i.e. after the new law was approved.

Despite this generosity, the expelled migrants will be counted in thousands – lots of migrants don't register anywhere after they arrive to the Ruhr district and they stay there illegally. Peter Renzel from the local welfare bureau estimates that his office is going to expel 2,500 people.

In all of North Rhine-Westphalia Bundesland, there are tens of thousands of such cases. The industrial zone which gained its fame due to the high concentration of migrants and lots of jobs has been picked as the final destination by many of the migrants.

When they have already succeeded in crossing the Aegean Sea, the Balkans, and Central Europe to Germany, they don't want to give up the rest of their dream.

A large portion of the asylum seekers who are dreaming about a life in the Ruhr district, Cologne, or Düsseldorf ends up elsewhere because of the decisions by the authorities. Those are spreading them across Germany according to the so-colled Königstein Key. That formula takes populations and tax revenues into accounts, as announced by individual Bundeslands and free cities (a link to an article about the intra-German quotas). 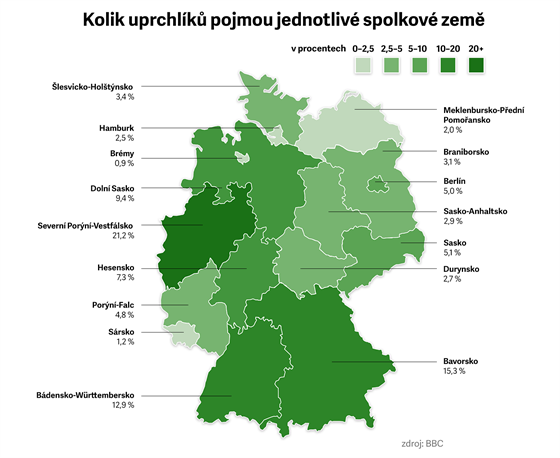 The distribution of asylum seekers among the individual German Bundeslands

About one-fifth of the migrants are really supposed to go to North Rhine-Westphalia according to these intra-German quotes, the rest is less lucky. They may end up in Saxony in DDR, Bavarian countryside, or even poor and forest-covered Thuringia in DDR.

"Some of them say that those places are not the true Germany. And they want the true Germany," Danny Kavalier, a mayor of a 15,000-folks little town Hettstedt in Saxony-Anhalt. The migrants assigned here have often "disappeared" and they could only be contacted once they registered in their dreamed-about city (they wrote about it here).

Berlin keeps on paying the cities for migrants who have disappeared

The steps meant to return the migrants to the places where they were supposed to live according to the Königstein Key were criticized both by the migrants as well as the NGOs that take care of them. "Of course it agrees with the new law. But many of them only recently found the peace, a place to live, and they could start to focus on their new life," Ms Birgit Naujoks of the Refugee Council of North Rhine-Westphalia said.

For example, in Gelsenkirchen, the Ruhr district, where the forced transfers could affect 1,900 people, migrants have been protesting for 6 days in a row, according to Waz.de. About 100-200 are meeting in front of the city hall. They mainly protest the retroactive character of the rules – they believe that the new rules should only affect those asylum seekers who applied for the asylum after the law was approved.

However, the authorities insist on their plan – partly because it costs the cities and Bundesland governments millions of extra euros to take care of the migrants and this money won't be reimbursed by anyone. It's because the money from Berlin keeps on flowing to those places where the migrant was "assigned" and from where he has disappeared. That's why the Gelsenkirchen city hall can't do any compromises. Every migrant who came to the city even though he should live elsewhere must leave by October.

The city hall's spokesman Martin Schullman added that according to the migrants' testimonies, even many Bavarian people are sometimes participating in the "teleportation" of the registered asylum owners who disappear and suddenly reappear in the Ruhr district. In order to get rid of the migrants, the clever Bavarian folks are telling the migrants that the life is cheaper in North Rhine-Westphalia and they will get a job.

"A dirty game is being played with those people and we must ultimately pay for this game. It's very painful for me but unfortunately, we have to remain firm," the spokesman Schullman states.


Well, that's quite a mess, a tragicomedy of a sort.

The most upvoted comments:

How can the Germans dare to do such things? These desperate, exhausted, frustrated people are escaping the war, hunger, and bombardment in East Germany!

The refugees' gratitude knows of no limits. :-)

Those doctors and engineers have turned to quite a hot potato. And if Angela hadn't said "Yes we can", I would almost start to be worried about the Germans. 3x :-D

If you want to get to the true Germany, you will have to master time travel – but it's not the forward direction that you need.

Those true Germans, they are quite some xenophobes!

And I was afraid that they would send them where they really belong. However, the statement is that it's just inside Germany... There must be a mistake somewhere...

It's no longer possible to even comment on that. Have you lost the last traces of your mind, Germans? What is the force that forces you to keep on pumping them into your country? They are simply economic migrants! Or is there a war crippling the poorer parts of Germany? You have no moral duty to let your country be shredded.

Not even in 1946, Germany could see this kind of a mess [literally whorehouse]. My God, where did Germans forget their reason?
Luboš Motl v 9:46 AM
Share