Were Feynman's lectures wrong on the Faraday cage?


Surprises of the Faraday Cage


by Lloyd N. Trefethen, a professor of numerical analysis, who claims that the Feynman Lectures on Physics are largely wrong when they discuss the Faraday cage. 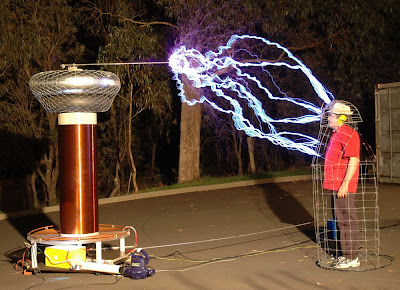 Source, a similar video, II, a couple. An application of the Faraday cage. Jump into a cage, take it to a really bad thunderstorm (or near a "Tesla coil", as here), and show others that you are a superman. Walter Lewin survived some 200 kV but not really the feminists.

It's being said that Feynman concludes that the fields we consider "shielded" drop exponentially away from the metallic plane while the numerical professor argues that the decrease is linear. The paragraph about the linear dependence is particularly incomprehensible to me because Trefethen actually talks about the logarithmic dependence or inverse proportionality. In the same paragraph, the numerical professor also talks about "squaring of the electric field" which sounds like a very sloppy language – because of dimensional analysis. Quite generally, I have no idea what should I imagine under the term "linear shielding" (except for the exponential one).


First of all, let me expose my background and preexisting expectations. I find it reasonable – and likely – that Feynman had to be wrong in a not quite negligible number of similar situations. He was outspoken and often loved to produce authoritative and interesting answers to questions, including difficult questions, quickly – I sometimes also like it. And it's somewhat implausible that one is always very close to the truth.


So I don't think it would be a violation of any laws of Nature if a whole section of the Feynman Lectures on Physics were largely wrong. On the other hand, it's even more plausible a priori that a professor named Lloyd N. Trefethen whom I have never heard of is wrong on electromagnetism, especially because he is a professor of numerical analysis, not physics.

OK, who is right is obviously given by the content of what he wrote or said, not according to his name, fame, or occupation.

Faraday also appreciated that you may replace the full "sheet" of a metal by a dense grid or mesh consisting of parallel wires – the same cage that you normally use to protect your life against a lion or a parrot. And this is a problem similar to what Feynman discusses in


He assumes that the parallel wires in the \(xy\)-plane are separated by \(a\) in the \(x\)-direction and extended in the \(y\)-direction so some quantities are gonna be independent of \(y\). However, the fields will depend on \(z\), the distance from the plane with the mesh. Because the fields inside the plane may be expanded to a Fourier expansion involving functions like \(\cos (\pi n x / a)\) and because these fields should have the vanishing Laplacian, their dependence on \(z\) has be exponentially dropping to compensate for the "momentum in the \(x\) direction".

So at distances much greater than the separation \(a\) between the wires but much shorter than the length of the wires in the \(y\) direction, you should observe all electric fields as decaying exponentially with \(|z|\). That's the basic conclusion Feynman ends up with, too, and I think it's true. Well, he assumes that the wires carry a "constant charge density" which isn't exactly what you want to consider in the realistic situation. You want them to carry a constant current \(\vec j\). But I tend to think that all the electric and magnetic fields have to have the vanishing Laplacian in the empty space (static situations) so the argument above has to work regardless of the precise character of the sources and regardless of the precise boundary conditions near the wires. At least I believe that the exponential decrease is the right answer for the static fields – and very low-frequency ones. In practice, the waves with the wavelength longer than the separation of the wires in the cage/grid/mesh should be shielded well.

I feel especially confident that a grid of wires that go both in the \(x\) and \(y\) directions simply has to behave very similarly to a solid metallic shell, at least at wavelengths longer than the separation of the wires. This is an important physics insight – one that explains e.g. why it doesn't matter that "most of the atom is empty". Matter still behaves as a continuum etc. The grid-is-just-like-a-shell is a nicely well-defined if not calculable example of this true concept. At longer length scales (and wavelengths) at which a grid looks like a full plane, it behaves as a full plane, too, except for a thin shell (where the "wrong fields" drop exponentially) of thickness comparable to the wire separation. Similarly, a lattice of atoms looks like a continuum at distance scales much longer than the distance between the atoms, and it therefore behaves as one, too.

Lloyd Nick Trefethen has said a lot of big words about Feynman's need for referees (I am sure that the textbook was read by several other people before it was published and maybe even before the lectures were taught) and similar things but his explanations why Feynman is wrong – the actual physics that should be the beef of his text – was far less clear to me. If someone believes that Trefethen's text is as clear and persuasive as Feynman's discussion, well, I beg to differ and think that the believer has very poor physics skills.

Feynman has assumed the constant charge density at the wires but at least at some moment, it must be right. Before the current starts to flow, there must be an excess of charge somewhere in the wire. Moreover, Trefethen believes that the thickness of the wires is very important. Well, it's important along with the conductivity – the wires must be enough to make the potential constant quickly enough in a big enough piece of the locus of the wires with a good enough accuracy. But I think that thin wires may work equally well if they're better conductors.

At the end, I understand Feynman's presentation perfectly and I would okay it (although he may have fooled me into overlooking an important error) but I am simply not understanding Trefethen's critique so far. He doesn't say where Feynman is supposed to be wrong. Instead, we are shown some pictures that are said to show that Feynman is wrong but it's not clear how they could show it and we're probably expected to assume that Trefethen is right because he has made some numerical simulations or something. Well, the latter argument doesn't impress me much.

If someone doesn't understand physics, a computer and the knowledge of programming won't help him. Feynman uses a clever theorist's big-picture approximate analysis of some differential equations. Trefethen seems to build on some rather blind belief in a computer simulation of something he is not certain about in the absence of the computer. Well, the theorist's path is vastly more reliable than the simulation. A computer may just easily repeat all the misconceptions of his master – plus creatively adds many mistakes and effects whose unphysical character can't be demonstrated by the physically illiterate master. By the way, don't forget Feynman's comments about the computer disease.

I am annoyed by lots of other points in Trefethen's essay. For example, this essay talks about the "Faraday cage" but the word "cage" doesn't appear in Feynman's book at all. He is solving a particular problem in electrostatics – with linear uniformly charged wire-like sources (and I think that he does so correctly) – which isn't necessarily the same thing as a properly defined Faraday cage in the real world. Trefethen therefore seems to sloppily criticize Feynman for things that Feynman hasn't written, and so on.

The detailed individual points of criticism may be right for some reasons I don't quite understand at this moment but Trefethen seems to combine them in ways that look incoherent to me. And when I try to identify the most universal idea underlying Trefethen's article, it seems to be his actual belief that the Faraday cage doesn't work at all. So Trefethen isn't really disagreeing with Feynman but with some 200 years of physicists in electromagnetism. Well, the picture at the top is an example of experimental evidence that it works pretty well, Trefethen is wrong, and Feynman is right. Trefethen even claims that the Faraday cage can't protect you from a cell phone signal. Well, a British pub installed a Faraday cage yesterday that does just that! The cell phone wavelength is comparable to a foot so any denser wires are pretty good at killing the signal of the phone users who were spoiling the fun in the pub.

Unlike your humble correspondent, Francis Mule (in Spanish) was persuaded by the numerical professor but I think that his text says nothing useful beyond the translation of the incomprehensible Trefethen's critique.

If someone believes that he understands why Trefethen is right and Feynman was wrong, could this dear reader please explain it to me in a clearer, more Feynman-like way, than Trefethen did? Thank you very much. Unless something changes, I think that the degree of uncritical belief that Mr Trefethen, a non-physicist, may correct the Feynman Lectures in Physics looks unsubstantiated to me. Laymen misunderstand lots about physics, its laws, and the methods to derive some qualitative and approximate conclusions. I do think that the word "laymen" in the previous sentence includes most of the professors of numerical methods, too, and that a numerical professor may easily misunderstand such basic questions such as the question why the Faraday cage works at all.


P.S. After some thinking about the particular "spectacular" experiments, I do find it plausible that the simple approximation of the cage by a shell could be insufficient if the wires are too thin etc. That could mean that Feynman's neglecting of the "unshielded" part of the electric field could be a mistake. The exponentially decreasing terms are still there but so is an unshielded (not decreasing with \(z\)) one. Feynman's calculation is still important and relevant – one must just realize that the unshielded e.g. uniform electric field term may still be added on top of his nontrivial solution. Most of the field may remain unshielded if the wires are thin – because the "mirror charges" (even in combination) are much smaller than the original ones if the wires are thin.

However, the real-world Faraday cage experiments work even for thin wires, anyway, as the videos at the top show, because when the electric fields (voltage per unit length) between (even thin) wires are too big, the air in between the wires discharges by flashes – it effectively becomes a conductor, too. When the thins are very thin, they don't compensate the electric fields too well in the vacuum, as Trefethen correctly concluded, but they cause even greater electric fields near the vicinity of the wires (where \(|\vec E|\sim 1/r\)) and increase the chance of a discharge.

If the previous two paragraphs are right, then the computations by the Oxford critic could have been right – but his blog post and paper still look utterly useless to me because he hasn't actually identified the mistake by Feynman which is highly localized – overlooking the constant term (or the nonzero average value of the field etc.) in the solution to the Laplace equation. Trefethen behaves as if he suggests that whole section of the textbook should have been omitted or replaced by something totally obscure or different. In reality, just a localized mistake – with important practical consequences – should be fixed.
Luboš Motl v 4:31 PM
Share