It's not certain at all that next Tuesday, the Nobel prize in physics will be given to the people associated with LIGO, the (double) L-shaped experiment that announced the detection of Einstein's gravitational waves in February 2016. Recall that the waves were actually detected on September 14th, 2015, a year ago, just four months after an interview where someone said that the detection would take place "within five years". Sometimes things are slower than expected but indeed, sometimes they are faster, too.

Despite the uncertainty about the 2016 Nobel, the LIGO possibility is reasonably likely by now. Rumors indicate that the January 31st deadline for the nominations didn't turn out to be a fatal obstacle for the LIGO-related candidates.

In February, I was afraid that there could be some politically correct folks who would want to reward the current leaders of the experiment – basically random politically chosen hires. But thankfully or hopefully, it seems that the probability of this scenario has decreased and the actual fathers of the LIGO success – which made the decisive steps decades ago – are more likely to win.


Weiss, Thorne, and Drever are often mentioned as the "most likely triplet" to win the LIGO Nobel prize. However, Universe Today wrote a helpful article


The 2016 Nobel prize in physics: it's complicated


that highlights the key role that Barry Barish has played.

Update: The Science Magazine has published its own article on the same topic, Will Nobel prize overlook the master builder of gravitational wave detectors? There are lots of details in that article which are not incorporated in my text below which was written earlier. For example, Sheldon Glashow defends Barish as a "must be included" winner. (Paragraph-wide hat tip: Willie Soon.)


Half a year ago, TRF readers like you could have noticed Barish's name because of an attack by some unhinged far left social justice warriors. During an informal dinner talk about LIGO, Barish dared to use a picture of a blackface. I don't know what the picture was like (the Science Magazine said that another man on the cartoon was writing something on a woman's back) – but Google Images indicates that it could have been as innocent as the picture I placed at the top. Maybe his two eyes were the two black holes? I am just guessing.

Needless to say, showing such a picture is on par with running Auschwitz for five years, these insane PC scumbags want you to believe. Those SJWs went so ballistic that they didn't even tell us what was the reason.

At any rate, Barry Barish isn't just a gravitational physics Fachidiot. He is an experimental physicist who was also a director of the (planned) International Linear Collider for a while (and also a big guy at the SSC; and an important searcher of magnetic monopoles in Gran Sasso) – i.e. a leader in experimental particle physics. In 1994, he became the single director of LIGO (well, principal investigator in 1994 and director in 1997) and it mattered. He reorganized things and things began to move.

The initial steps by Einstein, Weber, Weiss, Drever, and Thorne were precious but they simply didn't guarantee the 2015-2016 victory we recently witnessed. Barish increased the teams, established LSC to make some brains outside MIT and Caltech "work for LIGO for free", improved the communication with political supervisors, and forced everyone to run the interferometers 24 hours a day and study it routinely, like in a factory, instead of allowing people to talk like gurus without actually dealing with the device. A different attitude that was simply needed. He also switched from argon-gas lasers to newer solid-state lasers and from analog controls to digital ones.

The article in Universe Today points out that especially between 1989 and 1994, the LIGO project – under two directors whose names I omit because I am extremely polite and because I don't remember them – was making no progress. Nothing was improving technologically and, correspondingly and somewhat fairly, funding conditions weren't getting better, either. I don't have a "proof" but I think it's probably fair to say that those directors were enjoying their convenient jobs where they didn't have to do anything because "everyone" believed that the project would never materialize, anyway, so matching these pessimistic expectations, they were doing nothing substantial. Typical Big-Government-style parasites. 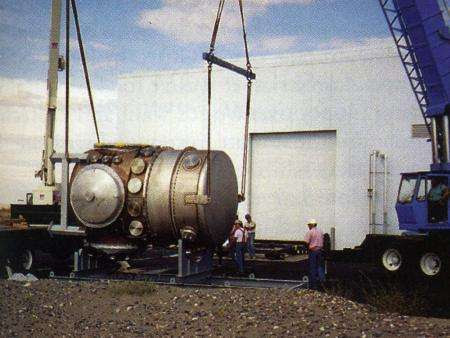 Barish made the difference and things began to move. By 1999, i.e. within five years of his leadership, the "thing" was actually built and the LIGO began to take the data in 2002. Barish must be a very good manager and the LIGO's sensitivity looks unbelievable. But at some qualitative level, it's just a laser interferometer with a long tunnel. It's a device that Morley and Michelson were using in the 19th century combined with lasers – devices that some kids carry in their pockets. And the pipelines are routinely transferring oil. The LIGO project – roughly a combination of these three things with a couple of extra "simply clever" isolated additions – isn't something impossible.

Once one brings the project to the situation when it can take some data, the improvements needed to improve the sensitivity etc. become a matter of evolution, gradual changes, and the planning of those is more straightforward. Think about the release of the first iPhone – and the relatively straightforward path from iPhone 1 to iPhone 7. The facility "basically" works and one may focus on the improvements that are needed to make it work "well enough to detect the damn black hole merger".


“I think there’s a bit of truth that LIGO wouldn’t be here if I didn’t do it, so I don’t think I’m undeserving. If they wait a year and give it to these three guys, at least I’ll feel that they thought about it,” he says. “If they decide [to give it to them] this October, I’ll have more bad feelings because they won’t have done their homework.”


So if the three old guys won't get the prize next Tuesday, it may be enough for Barish not to be insulted. Of course, hesitation may also be interpreted as "not considering the value of LIGO too highly" and you may interpret Barish's words as a more cynical or cruel idea: Wait for one year, maybe Ron Drever isn't too healthy to see Fall 2017, and I (Barish) may fit to the triplet nicely. Just to be sure, Barish didn't really say or write such a thing. But I just happen to think that it's not negligibly likely that this is the actual logic behind Barish's quote above which is why I found it honest to tell you about it.

It's a good idea that the number of Nobel prize winners per year is bounded from above. Without this limit, the importance of the prize would be getting diluted. Sometimes the constraint unavoidably leads to some tension. Maybe it's an opportunity for some other prizes to reward Barish for his essential contributions, however.
Luboš Motl v 11:55 AM
Share