A summit about the EU future takes place in the Slovak capital today. The location was determined by the ongoing Slovak EU presidency. Because they should focus on a "more distant" future, the British leaders will be absent for the first time. That's why the discussions on Brexit won't take place – or may turn out to be inconsequential.

Nominal EU President Donald Tusk urges a brutally honest assessment while the BBC is certain that the meeting will be a waste of time. Well, I also guess that they won't solve anything meaningfully but I still think that a meeting organized by the Slovak government has greater chances than those in Brussels and elsewhere. The Visegrád Group may present some reform plan for the EU (a "cultural counterrevolution") – a plan trying to make the EU less integrated, among other things. We will see whether a unified V4 voice exists and has a chance to be heard. Czech PM Sobotka would like to focus the summit on the "fight against illegal immigration and terrorism".

In the morning, delegations arrive to the Bratislava Castle. The folks should talk for some two or three hours over there. The Slovak government insisted on a different arrangement than the talks in Brussels usually have; that includes some small rooms for discussions of couples or small groups. I surely think it's a good idea for the Slovaks – and other individual organizers – to bring some of their own approach. They also emphasize that the participants will be served proper Slovak wine instead of some French plonk. :-)


Around the noon, the VIPs should be taken to a luxurious German steamboat, Regina Danubia. Because the Danube is rather shallow and, to make it worse, the amount of water in the river is below the average now, they had to shorten this part of the conference. They will spend two hours on the Danube before they will return to the Bratislava Castle – the Danubia gallery was the original plan.


For the inhabitants of Bratislava, the event will probably imply the toughest traffic jams in the city's history. They were told to leave. 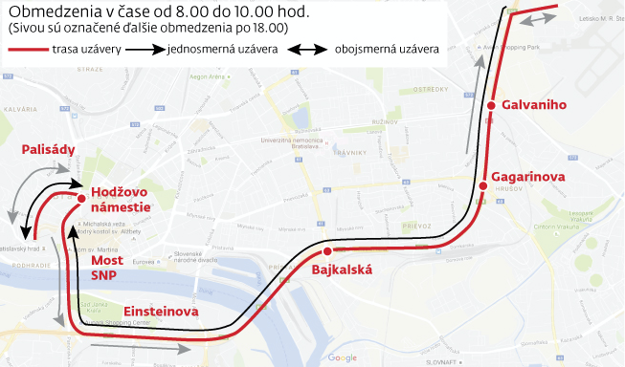 I posted the map of the closed streets in the morning because I generally like the names of streets and squares in Bratislava. Just to be sure, the Danube is West-to-East Southern boundary of the traditional city. (The suburb South from the Danube is Petržalka, made of concrete blocks, and it is adjacent to Austria. Bratislava itself also borders with Hungary on the Southeast side. So Bratislava is nothing like Prague or Paris which try to be in the center of Czechia or France. The "borderland capital" only highlights my point that the "bulk" of the Slovak nation is rural in character.) If you start on the left side, there is the Bratislava Castle (search for "hrad") near the river, the Palisades, The Hodža Square (that's where the Presidential Palace pictured at the top is located, StreetView), then the SNP Bridge, Einstein Street, Bajkal Street, Gagarin Street, and Galvani Street.

Einstein, Gagarin, Galvani – it looks like a pretty scientific city according to this map, right? Einstein is very famous but you won't find too many Einstein streets in the world, will you?

The other places are interesting, too. Why I am talking about the geography of Bratislava? Because I was offended by an article in Respekt.cz, a typical magazine of the Prague Café, titled Bratislava is an exhibition of wasted opportunities. The author says that the Slovak capital is an example of cities that were conquered by the barbarians (he means the Slovaks!) who have imposed their barbarism onto the city and destroyed its spirit. They have no relationship to their city which, when combined with corruption and other things, makes sure that the city isn't a good place to live. I've summarized his rant in two sentences – there's nothing else in the rant and these aßholes could learn how to write more concisely, indeed.

Slovaks are a typical rural nation – where almost everyone lived (and still lives, to a large extent) in some kind of a countryside or at least small towns. Check for Horehronie video clips to get some idea. Lowlands, big mountains, it's been mostly a romantic industry-free landscape for us. Only two cities are above 100,000 people – Bratislava and Košice – and both of them are below 500,000 inhabitants.

So the Slovaks are really analogous to the blue tribes in Avatar or any other nation or tribe that has been "romanticized" by the leftists in reality or fiction. Except that the leftists only like to romanticize those who do some harmful things to the civilized countries, e.g. the "nation" of the Palestinian terrorists. Slovaks aren't like that so they don't get the same idealized treatment. I think that many egalitarian Westerners assume that every nation has to have 50% in the big cities, a large Cosmopolitan area, and so on, but that's simply not the case. Imagine that you cut a piece of the French countryside and turn it into a separate nation. By construction, that nation simply won't have anything like Paris in it. The percentages of the political support for various causes will be very different than in Paris. 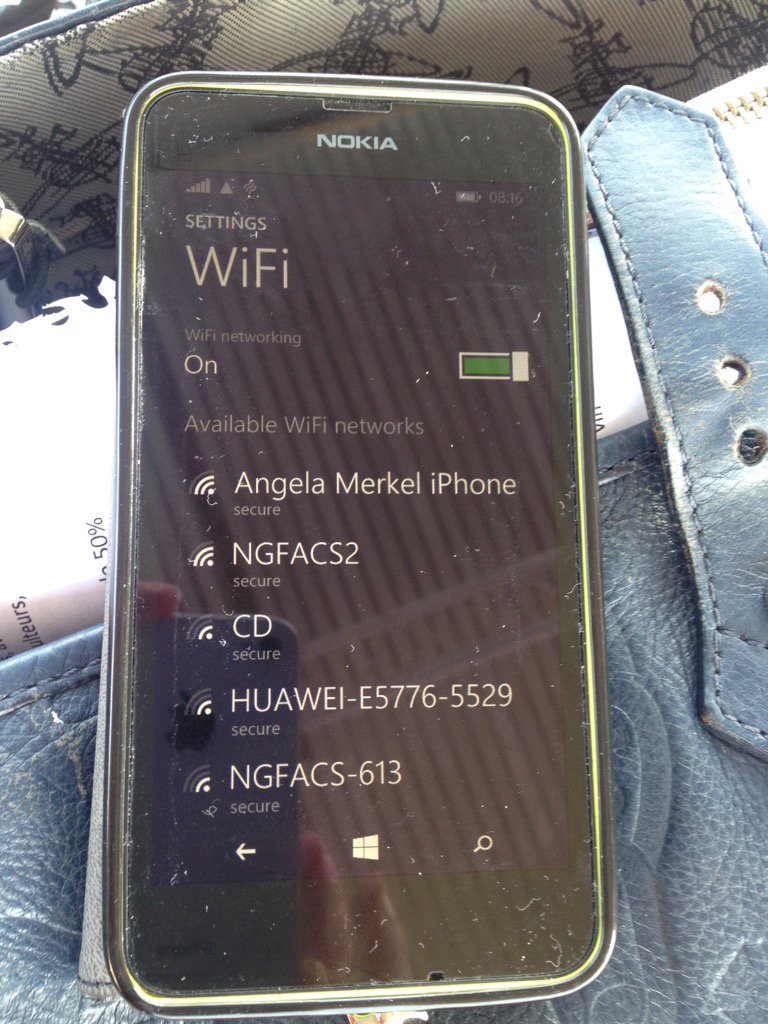 As sophisticated users of the Windows Phone may immediately see, Angela Merkel is spreading her own WiFi iPhone signal in Bratislava.

While the purely rural or agricultural image of Slovakia was accurate up to 1918 or so, lots of things have changed since the birth of Czechoslovakia. Note that in 1919, Bratislava (a Slavic word vaguely meaning Brothers-fame or Brothers-Slavs) got this new name; it was known as Pressburg (DE) or Poszony (HU) before that. The fast industrialization continued and the numbers look very different now. Among other things, Slovakia has the highest production of cars per capita in Europe. It's ahead of Czechia which is at the second place. This particular leadership will become even more extreme soon because Jaguar Land Rover just decided to build a new plant in Nitra, Slovakia.

In the 20th century, Slovakia has undergone a similar transformation of the identity as the Czech lands did in the 19th century. I believe that most of my ancestors who lived a century ago were basically rural folks. I think that the changes have mostly meant "progress" but I would find it crazy and immoral to despise the ancestors and their countryside habits. We wouldn't be here without them, after all.

The aßhole in Respekt.cz says that the Slovaks represented just 1/3 of Bratislava before the war. But the Jews were exterminated while the Hungarians and especially Germans were mostly expelled. So the true – rural – Slovaks had to resettle much of Bratislava. And he's disgusted by that. Well, the history is surely true. But his reaction to it isn't right.

The Holocaust wasn't really invented by the Slovaks. It has happened and cannot be undone. In the article, the author or some commenters criticize how the Hodža Square near the Presidential Palace was rebuilt. It used to be more alive etc.

Well, I just liked it when I visited Bratislava in 2009. The Presidential Palace is sufficiently separated from the ordinary life. It is a tourist destination of a sort, like royal palaces in Scandinavian countries or even Prague. There is this big road but I think that Bratislava would need it, anyway.

They particularly criticize the area that used to be the Jewish Quarter. It was demolished some 20 years after the war. Obviously, it's automatically assumed that this was one of the crimes by the Slovak Bolsheviks. In reality, it seems likely that I would have agreed with those changes of architecture myself. The point is that the demolition was a part of the construction of the SNP [Slovak National uPrising] Bridge which became a modern dominant of the city – and an important traffic artery.

When I look at the pictures of the Jewish Quarter in Bratislava, I don't think that they were terribly beautiful buildings. The synagogue in the middle was pretty enough. But people realize it. And a few years ago, they built a cool and cheap replica of the synagogue at the same place.

But more generally, I found this part of the city – around Fishy Square [Rybné námestie] very pretty. It's a little bit like a small sibling of the streets around the Old Town Square in Prague. You may check that the restaurants offer Pilsner Urquell as their main beer so this looks OK to me, too.

By the way, I mentioned the Hodža Square, named after Milan Hodža, a (Czecho)Slovak politician who was very important in the mid 1930s. He actually became the Czechoslovak prime minister – and was also the acting president for 4 days after Masaryk's death. He wasn't really a man of visions but he was a very influential modern Realpolitik agrarian politician. When he emigrated to France in 1939, he was more powerful than even President Beneš for a while. Hodža died in Florida in 1944.

The guy in Respekt.cz is also right that Bratislava had to live – and still has to deal with – the limited patriotism of its inhabitants because many of them are relative newcomers or the first or second generation after the newcomers. But it's crazy to criticize the city for that. Bratislava – or its current inhabitants – just cannot be blamed for that. It was mostly some Germans who were responsible for the disappearance of the Jews. And it's pretty much the same cruel acts by the Germans that also made the expulsion more or less necessary after the war.

For those reasons, Bratislava was facing similar challenges like the cities in the Sudetenland – I mean primarily Northern Bohemia. Of course the exodus of the old population has some negative consequences. But they could be much worse. I think that Northern Bohemia has dealt with them relatively fine – and my feeling is that it was even better in Bratislava. To a large extent, I had and have the feeling that Bratislava is as elegant a productive city as Pilsen – and I really think that Pilsen has made a huge progress. But Pilsen has had a clear advantage. It's been a mostly ethnic Czech city from the beginning and hasn't suffered any major changes of its demographics. Given the fact that Bratislava had to deal with more radical changes, it is doing very well.

My broader ideological point is that many of the people who try to demonize Slovakia, Bratislava, and the Slovaks are basically driven by some fanatical and deeply emotional racism directed against ordinary enough white people – like the nation of Slovaks that is much more connected to the countryside than large metropolitan areas. But it's also an example of a rural nation that has shown the ability to become civilized and industrialized rather abruptly and reliably.

I don't like racist hatred – and of course, I find the hatred against central European rural folks even more unacceptable because I consider such folks to be a "part of my identity".
Luboš Motl v 8:11 AM
Share