The plans to build the world's new greatest collider in China have many prominent supporters – including Shing-Tung Yau, Nima Arkani-Hamed, David Gross, Edward Witten – but SixthTone and South China Morning Post just informed us about a very prominent foe: Chen-Ning Yang, the more famous part of Lee-Yang and Yang-Mills.

He is about 94 years old now but his brain is very active and his influence may even be enough to kill the project(s). 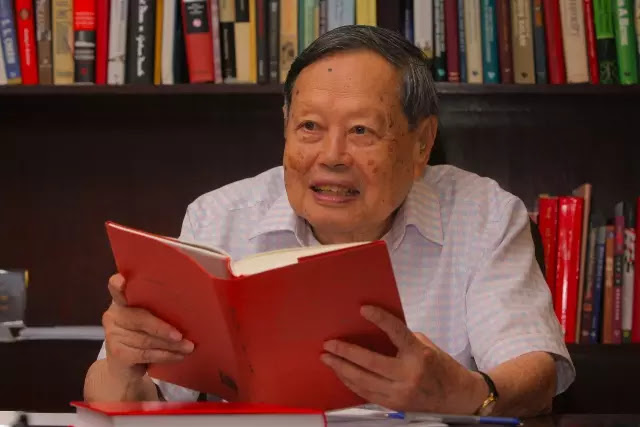 The criticism is mainly framed as a criticism of CEPC (Circular Electron-Positron Collider), a 50-70-kilometer-long [by circumference] lepton accelerator. But I guess that if the relevant people decided to build another hadron machine in China, and recall that SPPC (Super Proton-Proton Collider) is supposed to be located in the same tunnel, his criticism would be about the same. In other words, Yang is against all big Chinese colliders. If you have time, read these 403 pages on the CEPC-SPPC project. Yang may arguably make all this work futile by spitting a few milliliters of saliva.

He wrote his essay for a Chinese newspaper 3 days ago,


The journalists frame this opinion as an exchange with Shing-Tung Yau who famously co-wrote a pro-Chinese-collider book.


My Chinese isn't flawless. Also, his opinions and arguments aren't exactly innovative. But let me sketch what he's saying.


He says that Yau has misinterpreted his views when he said that Yang was incomprehensibly against the further progress in high-energy physics. Yang claims to be against the Chinese colliders only. Well, I wouldn't summarize his views in this way after I have read the whole op-ed.

His reasons to oppose the accelerator are:
You can see that it's a mixed bag with some (but not all) of the anti-HEP slogans combined with some left-wing propaganda. I am sorry but especially the social arguments are just bogus.

What decides about a country's ability to make a big project is primarily the total GDP, not the GDP per capita. Ancient China built the Great Chinese Wall despite the fact that the GDP per capita was much lower than the today's GDP per capita. Those people couldn't buy a single Xiaomi Redmi 3 Android smartphone for their salary (I am considering this octa-core $150 smartphone – which seems to be the #1 bestselling Android phone in Czechia now – as a gift now). But they still built the wall. And today, Chinese companies are among the most important producers of many high-tech products; I just mentioned one example. As you may see with your naked eyes, this capability in no way contradicts China's low GDP per capita.

The idea that a country makes much social progress by redistributing the money it has among all the people is just a communist delusion. That's how China worked before it started to grow some 30 years ago. You just shouldn't spend or devour all this money – for healthcare of the poor citizens etc. – if you want China to qualitatively improve. You need to invest into sufficiently well-defined things. You may take those $10-$20 billion for the Chinese collider projects and spread them among the Chinese citizens. But that will bring some $10-$20 to each person – perhaps one dinner in a fancier restaurant or one package of good cigarettes. It's normal for the poor people to spend the money in such a way that the wealth quickly evaporates. The concentration of the capital is even more needed in poor countries that want to grow.

Also, China's contribution to HEP physics – and other fields – is limited now. But that's mostly because similar moves and investments that would integrate China to the world's scientific community weren't done in the past or at least they were not numerous.

Yang's remarks about the hypothetical Nobel prizes are specious, too. I don't know who will get Nobel prizes for discoveries at Chinese colliders, if anyone, so it's a pure speculation. But the Nobel prize money is clearly not why colliders are being built. Higgs and Englert got some $1 million from the Nobel committee while the LHC cost $10 billion or so. The prizes can in no way be considered the "repayment of the investments". What the experiments like that bring to science and the mankind is much more than some personal wealth for several people.

You may see that regardless of the recipients of the prize money (and regardless of the disappointing pro-SM results coming from the LHC), everyone understands that because of the LHC and its status, Europe has become essential in the state-of-the-art particle physics. Many peope may like to say unfriendly things about particle physics but at the end, I think that they also understand that at least among well-defined and concentrated disciplines, particle physics is the royal discipline of science. A "center of mass" of this discipline is located on the Swiss-French border. In ten years, China could take this leadership from Europe. This would be a benefit for China that is far more valuable than $10-$20 billion. China – whose annual GDP was some $11 trillion in 2015 – is paying much more money for various other things.


Off-topic: Some news reports talk about a new "Madala boson". It seems to be all about this 2-weeks-old 5-page-long hep-ph preprint presenting a two-Higgs-doublet model that also claims to say something about the composition of dark matter (which is said to be composed of a new scalar \(\chi\)). I've seen many two-Higgs-doublet papers and papers about dark matter and I don't see a sense in which this paper is more important or more persuasive.

The boson should already be seen in the LHC data but it's not.

On September 25th or so, Maria Spiropulu linked to this new Chinese article where 2+2 scholars support/dismiss the Chinese collider plans. David Gross' pro-collider story is the most detailed argumentation.
Luboš Motl v 11:41 AM
Share