There are various people in the Europe – and even in Czechia – who have endorsed Hillary Clinton for the U.S. president. Well, even though the late Václav Havel could be one of these people if he were around, the Czech presidents who are alive beg to differ.

President Emeritus Václav Klaus believes (and so do his aides) that Hillary's reign would be a continuation of the ongoing tragic drift towards the PC post-democracy. He thinks that Trump is a natural political animal who is currently playing the role of a campaigner and who will behave differently, more responsibly, once he sits in the White House. However, Klaus often says that "unfortunately, Hillary will probably win".

Well, I actually think that Trump's victory is more likely. 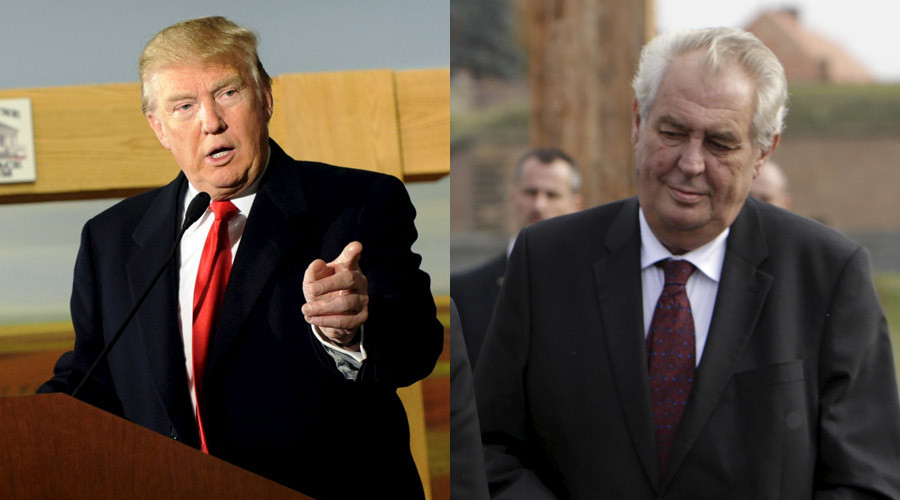 Today, the current Czech president Miloš Zeman, the founder of the modern social democracy in Czechia, was interviewed by iDNES TV and its boss Jaroslav Plesl, a journalist owned by the billionaire Andrej Babiš.

The first half of the 15-minute interview is dedicated to the Czech regional elections (in October 2016), the Czech economy, budget deficits etc. The elections are less important than the parliamentary elections. Those things are totally boring for 98% of TRF voters. Let me jump to the foreign policy questions.


5:45 Dear Mr president, the Czech Republic was recently visited by Chancellor Angela Merkel. I would like to know not so much what you were discussing – those reports have already appeared in the media – but what was your impression of her.

You know, if we realize that she's gone through several difficult weeks if not months, she looked remarkably balanced. She told me that she came to learn about our attitudes. That's why we informed her about those. It would certainly be incorrect to call these attitudes "friendly towards her policies on immigration".

Dear editor-in-chief, a professional politician must be able to suppress her feelings and look the same way all the time. For example, she must be able to have the so-called poker face.

6:50 Recently, you also met the Austrian presidential candidate Norbert Hofer. How would you characterize him?

A young, dynamic, expansionist politician. By the way, journalists wrote that I had invited him. In reality, I just agreed with his wish to meet. And I believe that he represents the same direction for future politics as Robert Fico has in Slovakia, Viktor Orbán in Hungary, Andrzej Duda in Poland, and I in the Czech Republic.

It's much more reasonable that it will turn into a V+ or V4+ because this project allows us to incorporate not only Austria but also Slovenia, perhaps Croatia, and also other countries.

8:00 In recent times, the term "populism" has been frequently used (fenced with) in Europe. It's been applied to Mr Hofer but also to you. What's the relevance of the word from your viewpoint?

It is a very useful label, a sticker, but if someone were asked to explain how the populism manifests itself or, indeed, what it is, he would mostly be unable to explain it. Incidentally, even Donald Trump and others have been a target of the label.

It's a label that's being exploited in political conflicts and that is forgotten once the elections are over with any result.

8:40 The situation in Europe may be radically affected by the repudiation of the deal with Turkey. If they won't get the visa-free regime for Europe, Turkey will have to react in some way. What's your estimate about the future development in these matters?

Because it should be in the middle of October, I think that all of us [except for Brangelina] will survive to that moment. But it's an excellent Charybdis because on one hand, if, in the current situation, the visa-free regime with Turkey were introduced, the European Union would lose its face. On top of that, we would be threatened by an invasion of a large set of Turks into Europe. And if the regime didn't come to force, President Erdogan may fulfill his threats and open the gates for some 3 million refugees on his territory. They may be sent to Europe.

It's a similar situation that Durynk faced in the Old Czech Legends. He could freely decide whether he's gonna hang himself on an alder tree near Prague, jump down from a rock, or he will be beheaded by an ax. If I remember well, he hanged himself on the alder tree.

9:55 If Turkey reopens the borders and the influx of the immigrants to Europe will resume, what will be the impact of it on the Czech parliamentary elections?

Well, if that happened, the position of those who were warning against this threat in time would strengthen. The position of the uncertain ones, those who were not saying anything, or those who were superficially against the EU quotas but who were promising to fulfill them voluntarily, anyway, would weaken. [Like PM Sobotka] You know, mandatory and voluntary quotas are effectively the same thing if the numbers of migrants in both are equal.

10:45 If that situation materialized, do you believe that the electorate would lean towards the wiser politicians from the traditional parties or the new anti-Islamic movements that are periodically emerging, splitting, merging, and running?

Definitely, they would mostly choose the relatively traditional parties. Everything is relative. Because of the fragmentation of the protest anti-Islamic movements, it's difficult for them to surpass the 5% threshold. Not to mention that they don't have any positive program. You can't just say what you're against; you must also say what you're for.

11:30 Mr president, the U.S. presidential elections are getting closer and the atmosphere is getting increasingly tense and dramatic. The media create the impression that a Trump victory will cause the Armageddon. Most recently, the boss of the EU Parliment Mr Schulz was warning against Mr Trump. Do you share the opinion that the potential election of Mr Trump as the U.S. president would lead to a global catastrophe?

I remember what it looked like when Ronald Reagan was running. They were saying: "He is just an actor, a stupid actor. He hasn't starred in any character roles, just in Westerns. What can you expect from him?" And he was one of the greatest U.S. presidents.

12:15 What do you think that the United States under Trump's leadership would look like?

There is one certain thing: they would be different than under Barack Obama. Don't forget that with all the respect towards Mr Obama, his name is connected with a long sequence of failures. The whole Middle East has been successfully thrown into disorder. Festering scars have remained and it seems that not a single one has healed yet.

12:45 And candidate Hillary Clinton is supposed to continue with these policies. Does it mean that Mr Trump would be a better candidate for you?

I won't intervene into the internal affairs of the U.S. I will just say that if I were a U.S. citizen, I would vote for Donald Trump.

It depends on which part of yourself is broken. Franklin Delano Roosevelt was bound to a wheelchair and he was an excellent president. Kennedy was hiding his diseases well, it's true, but he had a whole plethora of them. So there are diseases that aren't threatening you in your job. And it's primarily the physical handicaps. After all, even Wolfgang Schäuble is bound to a wheelchair – an excellent German finance minister.

And then there are mental disorders. Those can include even paranoia, Mr editor-in-chief. Politicians who suffer from paranoia are dangerous for themselves and their environment, too.

[Laughter] Yes, that's the well-known witticism. The fact that I don't suffer from paranoia doesn't mean that no one is going after me.

14:20 The following question is a logical one. What is the state of your health right now?

I don't suffer from paranoia. [Laughter]

14:30 A traditional question at the end. You could probably ask it yourself, without me. Have you already decided whether you will run for the second 5-year presidential term (from 2018)?

Wait for early March 2017 and you will learn the answer.

Thank you that you accepted to the today's Shootout and see you – you, Mr President, as well as our viewers.