The Paris agreement is a recent meaningless remake of the 1997 meaningless Kyoto treaty that, like the predecessor, tries to "fight against the climate change". Err once, err twice...

If you remember the Kyoto treaty, Al Gore signed it but the U.S. has never ratified it, and neither has Australia. Canada later withdrew from that pact. I think that the impact of this absence of the U.S. on the production of carbon dioxide – let alone the climate – was non-existent. In fact, the U.S. saw a greater decrease of "CO2 produced per dollar or capita" than the average Kyoto signatory. But because the U.S. stayed out, the American climate alarmists couldn't show their muscles as aggressively as their European counterparts.

Even though conservative Americans love to imagine that their nation is always more conservative than the European nations, I think that it doesn't apply to the current U.S. administration that is more left-wing than most European governments. This has many manifestations but one of them concerns the climate hysteria.


Along with his Chinese not-so-communist comrade and friend, Barack Obama "ratified" the Paris treaty on September 3rd. (China began to expand its coal production days later.) Needless to say, most of the people who sufficiently understand the U.S. laws have told Obama that he was just highlighting his being a clown because his "ratification" has no impact on the behavior of the U.S. after he is finally ejected from the White House in a few months. If you want to affect the constraints that will limit people's lives from 2017 on, Mr Obama, you really but really need some co-operation from the lawmakers.


From the viewpoint of the Paris treaty, what matters is that the mentally sub-par people behind the treaty count this Obama signature as a "ratification". The condition says that once 55 or more countries representing 55% or more of the CO2 emissions "ratify", and Obama has ratified, the agreement comes to force. What is the current status? 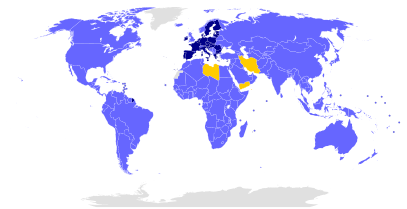 Well, let me omit all the EU member states (including the U.K.) – for the optimistic treatment at the bottom.

You may get 4.44% if you combine the numbers from the following larger "not yet ratified" countries:

Some of the holes may be contributed to some of the smaller producers of CO2. As you can see, one Russia is enough to fill the 4.44% hole. So is India+Canada or a group of 3 countries at 1.46% or higher, or... I won't enumerate all the possibilities: let me assume that the dear reader has learned something about addition. ;-)

My point is that it is not too hard to see a few countries that will add the missing 4.44% and with some great celebrations, the agreement will come to force.

It's potentially great news for the Europeans because when the treaty comes to force, all the EU member states may be out – and may enjoy the similar freedom as the U.S. enjoyed during the Kyoto treaty years. Some readers may point out that some members of the homo sapiens species in Europe disagree with my positive interpretation, don't they?

Yup. One example is a would-be dictator of the EU – in reality, an inconsequential clown – named Jean-Claude Juncker, the chairman of what would be the EU government if the EU were a country. Ten days ago, he proved that he wasn't an alcoholic. How did he prove it? He downed four glasses of champagne during the proof and when he was wobbling during walking, he said that it was the fault of his walking style, not the beverage!

Juncker has explained that he wasn't drunk in the video above. He just had a medical problem in his feet, knees, palms, and his tongue. These certified medical problems make his body unexpectedly march, hug, kiss, and lick various people around him.

Also, Jean-Claude Juncker has complained that the media have damaged his marriage. The rumors in the media have made his wife believe that when he behaves as a drunk man, he is actually drunk. Years of his patient mansplanations to his wife that it's a medical problem that makes him wobble after every downed bottle were turned into a waste of time.

Yesterday, the same distinguished "leader of the continent" labeled the EU – "his country" – "ludicrous" for not ratifying Paris. Maybe, this clown could ratify it on behalf of the EU in the same way as his fellow clown Obama did.

Needless to say, if the "whole EU" ratified, it would be more than enough for the Paris agreement to surpass the 55% threshold. The EU is closer to some 20% of the world's CO2 production. But as the European section of the Wikipedia article on the Paris agreement helpfully explains, there exists a desire that all the EU countries ratify individually yet simultaneously. Otherwise, some EU members could be forced to fulfill the obligations expected from others.

Now, it's funny because it's a sensible argument. In fact, the very same argument holds globally, too. What this observation really represents is a proof of a lethal defect of the Paris treaty or any similar "not quite global" agreement. Those who ratify this stuff are morons who harm themselves while the other countries may benefit. That's not a new discovery – we've been saying these things for many years.

Now, a part of my optimism is that I find it rather hard in the current circumstances to make the 28 EU countries ratify the deal. Many things may go wrong – well, at least 28 necessary conditions may go wrong. And it's a lot. In fact, in each country, many different things may go wrong. It's not trivial and waiting for everyone to join could be really, really hard.

Some EU countries – perhaps only France and Hungary (yes, the "fascist far right" Hungary, as the PC press likes to say) – have already ratified the ludicrous agreement in their parliaments. Others haven't. Poland's president Duda "boasted" in the U.N. that Poland began the ratification process. It's great except that Poland will almost certainly be the main EU country that will require a de facto opt-out for its coal power plants – the existing ones and the new ones that they are going to build. I think that without these special exceptions or extra carbon indulgences etc., Poland will not complete the ratification process. And there will probably not be enough "generosity for the Poles" in Brussels.

But there are lots of other countries whose Parliament may be unimpressed by the pressure pushing them towards ratification. You know, the lawmakers in the national Parliaments enjoy their sovereignty and freedom to decide. Many of the Parliaments look very different from the Parisian halls full of climate "sky is falling" nut jobs who may unexpectedly stab you if you fail to say "the sky is falling" with them. In all the national Parliaments, it's legally allowed to point out that the climate alarmists are deluded nut jobs and similar policies are nothing else than useless pseudoscientifically driven economic masochism.

By the way, I mentioned that Poland is the most coal-dependent country in Europe. It doesn't mean that it actually produces the highest amount of coal per capita. Czechia, the world's #16 producer in absolute numbers (not bad), actually trumps Poland in all "coal per capita" indicators you may define. But we also have several other extensive energy sources (most notably, nukes produce 30% in Czechia and 0% in Poland) and export lots of electricity so we're not as dependent on coal as Poland is. But almost everyone is dependent on coal to some extent, of course.

There will be lots of efforts by the clowns such as Juncker to make the 28 EU countries ratify quickly (he will surely down many climate-related bottles in the weeks to come) – and perhaps some pressure attempting to make others "wait" for Europe. Except that I have some optimistic hope that Juncker and similar nut jobs don't really have the power to do so. To combine 4.44% out of the countries in the list above seems much easier than the overcome the 28 EU hurdles. And I think that there are several countries in the list waiting for the ratification whose climate alarmists will be "proud" to ratify before the EU.

Once the 55% threshold is surpassed, the treaty should come into force and the people behind it could be satisfied. They will have formally enslaved more than 55% of the world. That's pretty good. The actual pressure on others to ratify could decrease and all the EU countries could actually stay out because the EU participation will no longer be viewed as "globally essential". If that were the outcome, it would be (almost) the only positive implication of the European Union in recent years. The slowness and inefficiency of the EU could actually save every single member from a particular idiocy.
Luboš Motl v 2:32 PM
Share