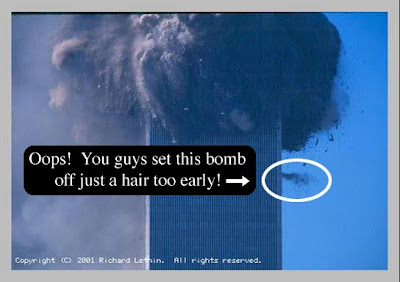 Almost exactly 10 years ago, I discussed a preprint incorrectly (as I showed) saying that the collapse seemed too fast. Here we go again.


Just like some of the best European physicists occasionally move to the U.S. to work there and contribute to the scientific research of the world quality, some of the most unhinged American crackpots sometimes team up with one of the most official European physics journals to publish their junk here. This comparison isn't exactly flattering because the two situations aren't exactly symmetric.

How do they argue?


They simply say that steel-framed high-rises have never fully collapsed due to a fire, so it can't happen! They list several features that should help such structures to be resilient. But they don't seem capable of distinguishing a wishful thinking from the reality. Everyone who has been building high towers from cubes or something else as a kid – or an adult – must know that it's potentially hard and the towers always have the inclination to collapse. The question isn't whether the buildings may collapse under certain perturbations – they always can – but only how big the perturbations have to be.

The experiment on 9/11 was a new one – and somewhat similar to the curious children's questions what happens when an always effective explosive collides with an unbreakable building. (Or if the omnipotent God tries to do something that cannot be done etc.) Who wins? Well, in this case, the experiment has been done. The two skyscrapers lost the battle, and so did another nearby building that wasn't directly hit.

In the middle of the article, they discuss the "rapid" and symmetric collapse of WTC7. I debunked these "too fast" claims a decade ago. Recall that the question whether the collision between two adjacent floors is closer to an elastic one or an inelastic one was important for determining the downward speed and acceleration of the "flaws".

Also, they didn't like that the collapse was symmetric. Well, the building was rather symmetric and so was the heating of it – I mean WTC7 only – so we shouldn't be shocked by a symmetric solution. These authors don't discuss any true model of the motion of all the floors at all. Needless to say, they don't mention my counter-arguments against these claims on mechanics, either. They just repeat the very same cr*p that similar conspiracy theorists have been saying for almost 15 years. Cr*p that is clearly addressed to technically uneducated laymen, not experts.

We're repeatedly told that a controlled demolition is possible. Indeed, it's possible. It's just a bit unlikely that you prepare your things for a controlled explosion and you're ready to start the event exactly when a bunch of Arab terrorists hits your skyscraper (or the adjacent skyscraper) with a big airplane, in a one-per-history event.

Another technical aspect of the article I find amazing is that they only mention one numerical value of a temperature, 660 °C, at one point when they suggest that this would be needed but couldn't have been achieved. Reports by engineers indicated that the temperature could have locally reached 800 °C; on the other hand, 500 °C could have been enough for the buildings to collapse.

This is clearly enough for the "normal" hypothesis about what happened to work without any special assumptions whatsoever. They just completely ignore it. They're so biased and obsessed with their alternative conspiracy theories that they refuse to see or acknowledge the most obvious theories and evidence supporting them. They refuse to admit that a much less awkward explanation exists and seems to work.

At the end of the article, they refer to "witnesses" who have heard "explosions". These comments are just silly as arguments because no effort is being made to figure out whether the sounds from some extreme events that were taking place according to one scenario or another could have been distinguished by the witnesses.

The conclusions are so shockingly stupid that I chose to copy-and-paste them:


It bears repeating that fires have never caused the total collapse of a steel-framed high-rise before or since 9/11. Did we witness an unprecedented event three separate times on September 11, 2001? The NIST reports, which attempted to support that unlikely conclusion, fail to persuade a growing number of architects, engineers, and scientists. Instead, the evidence points overwhelmingly to the conclusion that all three buildings were destroyed by controlled demolition. Given the far-reaching implications, it is morally imperative that this hypothesis be the subject of a truly scientific and impartial investigation by responsible authorities.


As I have mentioned, their main argument is that fires hadn't caused a complete collapse of such buildings before 9/11, so it couldn't have happened on 9/11, either. Every intelligent 5-year-old kid knows why this would-be argument is absolutely idiotic.

But the following sentence – question – is even more idiotic. An atheist is inclined to pray that these four men are just making fun out of you because if this is how their brains really operate, suicide is clearly the only cure to the lethal problems of those brains. They say that the collapses caused by fires are even more implausible because that would have to happen to three buildings at almost the same place and the same time. And that's absolutely unthinkable, they write!

Holy cow, what a bunch of complete imbeciles. The three events were in no way independent so the probability doesn't get more extreme because of \(N=3\) at all. The two Twin Towers were hit by two airplanes because these two attacks were coordinated – by Osama bin Laden, if you need to know. Both of them were consequences of one pathological process in the brain of an Arab spoiled brat. And the third building was affected by the vibrations and thermal conditions in the area, too.

Saying that \(N=3\) makes the "collapse by fire" explanation even more unlikely is exactly as stupid as saying that Hiroshima couldn't have been destroyed by a bomb because no bomb had ever destroyed more than 3 buildings at once – and on the fateful day, Hiroshima saw thousands of buildings destroyed so it would need thousands of miracles at the same moment. But these thousands of destroyed buildings were in no way independent.

The following sentences in the conclusions try to impress you with an ad hominem argument: the crackpots who believe in the "controlled explosions" have many occupations such as early retired engineers, patients of psychiatric asylums in Building A, in Building B, in Building C, and many other buildings, among other occupations. Truly impressive. But all of them are still just a bunch of incompetent, biased, and dishonest crackpots.

But let me post the last sentence of the conclusions again:


Given the far-reaching implications, it is morally imperative that this hypothesis be the subject of a truly scientific and impartial investigation by responsible authorities.


This is a recommendation to make science completely corrupt. That's simply not how things work in science when science works well.

Scientific research shouldn't be led by "responsible authorities". Scientific research should be done by independent scientists – they must also be independent of politicians, authorities, and political pressures; it should rely on empirical, logical, and mathematical evidence instead of political authorities and quotes; and it should be published in scientific journals. Europhysics News is an example of a journal that should have published a careful, scientific, clever, honest analysis of this physics problem.

Unfortunately, Europhysics News has missed the chance and gave the room to four absolutely inadequate crackpots. A European patriot doesn't exactly get too self-confident and flattered when he sees that our Old Continent – which basically created the advanced Western civilization as we know it in the recent 500 years or so – has deteriorated so badly that this pseudoscientific junk makes it to a European physics journal with one of the most officially sounding names and endorsements.

Dear authors, you are a bunch of dishonest imbeciles. And dear publishers and other folks in the journal who made this publication of this garbage possible, you are a team of jerks who are damaging the image of all the Europeans. No, not all of us, the Europeans, are as hopeless aßholes as the publishers behind this article.

Does it look good in both layouts of TRF? Update: It looks fine to me.
Luboš Motl v 4:09 PM
Share