Obama's "ratification" of the Paris climate treaty is a joke

I was asked to promote an article about Clexit (climate exit) at Breitbart. Well, I don't see how a website like mine could be effectively helping to increase the traffic at Breitbart that has far more visitors. It feels like the repetitive e-mails I am receiving from Donald Trump saying that he needs my money. Doesn't he have enough of his money and wouldn't it be more natural for him to send some money to me? ;-)

But as you can see, I did my best, included a hyperlink, and wrote a controversial description that will make some reader click at it. :-) 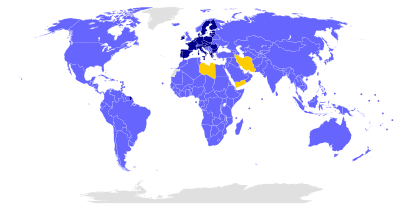 Orange countries are the current self-described "ratified signatories" of the Paris agreement.

Also, even though I am subscribed under Clexit, I don't see how the article by our "founding secretary of Clexit" exceeds or differs from thousands of other review articles about the climate issue that have been written in the last decade or two, except for his somewhat ludicrous title. Well, some of them were much deeper than this one. So apologies but with my lack of faith that this article makes any difference, I will probably not be an effective servant of the "founding secretary". For his age, his behavior looks childish to me.


There's some news. The Chinese and the U.S. president have met in China and "ratified" the Paris climate treaty. This brings the number of countries that have ratified it to 26. Additional 33 countries have promised to ratify before the end of the year. It means that the total number will exceed 55 which is needed. If they also exceed 55% of the world's production of CO2, the Paris climate treaty will come into force for the countries that have ratified it.

A map of the ratification status is available.

Recall that the Paris climate treaty is encouraging the countries to make individual commitments in the form of five-year plans to decarbonize their economies. Like communist parties, all the signatories should gather, talk about their experience with the five-year plans, criticize those who aren't sufficiently tough, and agree about new five-year plans. During communism, similar voluntary activities encouraged by the communist leadership were known as the Initiative Z.


The countries that have ratified may withdraw but the process of withdrawal takes at least 4 years in total. It's a lot of time to cause a significant harm to the country's economy. 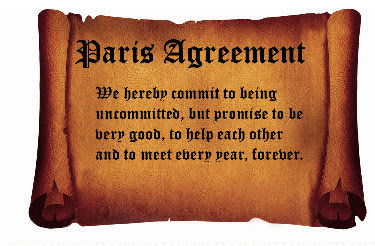 The Paris agreement is rather concise.

It's interesting to look how the treaties were ratified by China and America.

It would be sort of funny if that clown didn't mean it seriously.

We often say that China isn't a democracy – well, because it isn't one. Still, they have a legislature and yesterday, before the Chinese president signed the treaty during his today's "Planet Saved" comedy show with his U.S. counterpart, China's legislature actually voted to approve the treaty. If you want to know which words are being used for that, it was the "Standing Committee" of the "National People’s Congress" that was carefully thinking and finally adopted the agreement, according to the official Chinese press.

What about the process in the U.S., the self-described leader of the democratic world? Well, if it were one, the requirements would be analogous but more real than in China. Real representatives and not just a bunch of Chinese puppets who would be punished if they voted "incorrectly" would be really thinking about the merits of the agreement. The ratification of the treaty requires 2/3 of the votes in the Senate.

Instead, Barack Obama has declared that the salvation of the planet is no big deal legally. It is just an "executive agreement" which only requires the president's signature.

It is ludicrous but just try to think how terribly ludicrous this statement is. The executive branch of the government will be replaced by a different one when the treaty really comes into force around 2020. Well, the Obama administration will be gone in less than half a year. So how can an executive agreement or action of the current administration possibly affect how lawmakers, companies, and regular citizens behave in 2020 when the Paris treaty is supposed to be relevant?

It makes absolutely no sense. You clearly need some laws – adopted by lawmakers (they are called lawmakers because they make laws) – if you want some rules affecting the behavior of the U.S. citizens, companies, and politicians that survive the current administration. Barack Obama is just mocking himself – and he is mocking his supporters, too. As an Obama supporter, Gene Day looks even nuttier than he did before. Not even in the non-democratic China, it would be possible to completely avoid the will of the voters and their representatives while changing the legal landscape of the country in this serious way. Barack, you would have to be at least the Führer to make similar decisions. Your signature will be ignored by every American worker, entrepreneur, and politician who has a brain.

Meanwhile, it's much safer for the other countries that haven't signed yet not to sign, ever. I wouldn't really call it "Clexit". To "Clexit", you must first be in, and then it takes 4 years to leave. You just shouldn't get in at all. In particular, Brexit gave some new sovereignty and democracy to the U.K. so that it could follow it with Clexit and restore its 18th century industrial leadership.

It's ludicrous to assume that this signature of Obama's will matter. But it's only ludicrous from the contemporary viewpoint – this scenario has nothing to do with the way how the republic works. However, the actual main goal of the Paris treaty and similar activity of the climate alarmists is to change the conditions, promote the climate hysterical politicians to Führers, and make it possible for them to control every fart of yours and your cow (California has banned or regulated cows' farts, no kidding) without any attention paid to any representatives, voters, or taxpayers.

The actual goal of the climate hysteria is to introduce a new totalitarian system and this is why its proponents must be treated in the same way as the Nazis.
Luboš Motl v 2:40 PM
Share