Data collection to begin in early 2017

The main topic of my term paper in a 1998 Rutgers Glennys Farrar course was the question "Are neutrinos Majorana or Dirac?". I found the neutrino oscillations more important which is why I internalized that topic more deeply – although it was supposed to be reserved by a classmate of mine (and for some Canadian and Japanese guys who got a recent Nobel prize for the experiments). At any rate, the question I was assigned may be experimentally answered soon. Or not. (You may also want to see a similarly old term paper on the Milky Way at the galactic center.) 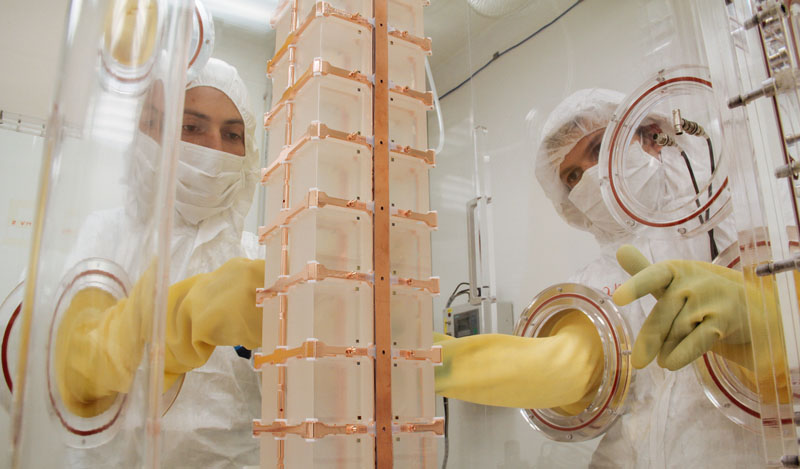 Neutrinos are spin-1/2 fermions. Their masses may arise just like the masses of electrons or positrons. In that case, we need a full Dirac spinor, two 2-component spinors, distinct particles and antiparticles (neutrinos and antineutrinos), and everything about the mass works just like in the case of the electrons and positrons. The Dirac mass terms are schematically\[


However, the mass of the observed neutrinos may also arise from the Majorana mass terms that don't need to introduce any new 2-component spinors, as I will discuss in a minute. Surprisingly, these two different possibilities look indistinguishable – even if we study the neutrino oscillations.

Note that the conservation of the angular momentum, and therefore the helicity, guarantees that neutrinos or antineutrinos in the real world – which move almost by the speed of light – can't change from left-handed ones to right-handed ones or vice versa. So even in the Majorana case, the "neutrino or antineutrino" identity of the particle is "effectively" preserved because of the angular momentum conservation law, even when oscillations are taken into account.


CUORE is one of the experiments (see the picture at the top) in Gran Sasso, central Italy. This particular experiment tries to find a neutrinoless double-decay. For some technical reasons I don't really understand (but I mostly believe that there are good reasons), tellurium – namely the isotope \({}^{130}{\rm Te}\) – is being used as the original nucleus that is supposed to decay.

Oxygen only plays the role of turning the tellurium-130 to an oxide, \({\rm TeO}_2\), which is a crystal. When the tellurium nucleus decays, it heats up some matter around it whose resistance changes proportionally to the absorbed heat and this change may be measured – this form of detection is known as the "bolometer".

If you look at the isotopes of the tellurium, you will learn that 38 isotopes (plus 17 nuclear isomers) of the element are known. Two of them, tellurium-128 and tellurium-130, decay by the double beta-decay. These two isotopes also happen to be the most widespread ones, accounting for 32% and 34% of "tellurium in Nature", respectively. Tellurium-130 decays some 3,000 times more quickly – the half-life is a bit below \(10^{21}\) years – which is why this isotope's decays are easier to be seen.

Well, what's easily seen is the decay through the "normal" double beta-decay: two electrons and two antineutrinos are being emitted, exactly twice the products in a normal beta-decay. The remaining nucleus is xenon-130.\[

\] Because the energy of the xenon is known, the two electrons and two antineutrinos divide the energy difference between the tellurium-130 and the xenon-130 nuclei. It's clear that the neutrinos devour a significant fraction of that energy.

However, when neutrinos are Majorana particle, the other 2-spinor doesn't really exist – or it doesn't exist in the low-energy effective theory. The mass terms for the neutrinos, including those that are responsible for the oscillations, are created from a single 2-component spinor, schematically\[

\] I used some 2-component antisymmetric epsilon symbol for the 2-spinors. Note that none of the etas in the product has a bar or a star. So this mass term actually "creates a pair of neutrinos" or "creates a pair of antineutrinos" or "destroys a neutrino and creates an antineutrino instead" or vice versa. As a result, it violates the conservation of the lepton number by \(\Delta L=\pm 2\).

See a question and an answer about the two types of the mass terms.

Because the lepton number is no longer conserved, the neutrinos may in principle be created and destroyed in pairs – without any "anti". This process may occur in the beta-decay as well. So if the neutrino masses arise from the Majorana term, a simplified reaction – the neutrinoless beta-decay – must also be allowed:\[

\] You may obtain the Feynman diagrams simply by connecting the two lines of the antineutrinos, which used to be external lines, and turning these lines into an internal propagator of the Feynman diagram. This linking should be possible; you may always use the Majorana mass term as a "vertex" with two external legs. I think that if you know the mass of the neutrino and assume it's a Majorana mass, it should also be possible to calculate the branching ratio (or partial decay rate) of this neutrinoless double beta-decay.

And it's this process that CUORE will try to find. If the neutrinos are Majorana particles, the experiment should ultimately see this rare process. When they draw the graph of the total energies of 2 electrons in "all" kinds of the double beta-decay, there should be a small peak near the maximum value of the two electrons' energy – which is some \(2.5275\MeV\), if you want to know.


See the Symmetry Magazine for a rather fresh story. The cooling has begun. In 2 months, the temperature will be dragged below 10 millikelvins. The experiment will become the coldest cubic meter in the known Universe. In early 2017, CUORE will begin to take data.


As a high-energy formal top-down theorist, I think it's more likely that the known neutrino masses are indeed Majorana masses because nothing prohibits these masses. Neutrinos don't carry any conserved charges under known forces (analogous to the electric charge) – and probably any (including so far unknown) long-range forces. In grand unified theories etc., the seesaw mechanism (or other mechanisms producing interactions in effective theories) naturally produce Majorana masses for the known 2-component neutrino spinors only. The other two-spinors, the right-handed neutrinos, may exist but they may have huge, GUT-scale masses, so these particles "effectively" don't exist in doable experiments.

There can also be Dirac masses on top of these Majorana masses. But I think that the Majorana masses of the magnitude comparable to the known neutrino masses (well, we only know the differences between squared masses of neutrinos, from the oscillations) should exist, too. And that's why I expect the neutrinoless double beta-decay to exist, too.

Because a planned upgrade of CUORE is called CUPID (another one is ABSuRD), just like the Roman god of love, I embedded a Czech cover version "Amor Magor" ("Moronic Amor") of the 1958 Connie Francis' and 1959 Neil Sedaka's song Stupid Cupid (see also an English cover from the 1990s). Ewa Farna sings about the stupid cupid who isn't able to hit her sweetheart's (or any other male) heart because he's as blind as a bullet. This Czech version was first recorded by top singer Lucie Bílá in 1998.

Her experience and emotions are superior but I chose teenage Ewa Farna because she was cute and relatively innocent at that time which seems more appropriate to me for the lyrics. ;-) If you want to take this argument to the limit, you may prefer this excellent 10-year-old Kiki Petráková's cover. (It seems to be a favorite song of Czech girls. Decreasingly perfect covers by Nelly Řehořová, Kamila Nývltová, Vendula Příhodová, Tereza Drábková, Michaela Kulhavá, Karolína Repetná, Tereza Kollerová.)

P.S.: While searching for my 1998 term paper on the Internet, I could only find a 2013 paper by Alvarez-Gaume and Vazquez-Mozo that thanks me in a footnote for some insight I can no longer remember, at least not clearly. Maybe I remember things from 1998 and older more than I remember those from 2013. ;-)


Completely off-topic: TV Prima is now broadcasting a Czech edition of Fort Boyart, with Czech participants and Czech actors. It feels like a cute sign of prosperity if a bunch of Czechs rents a real French fortress. But I just learned that already 31 nations have filmed their Fort Boyart over there... At least, the Czech version is the only one called "Something Boyard" where "something" isn't the French word "fort". We call it a pevnost. This word for a fortress is derived from the adjective "pevný", i.e. firm/solid/robust/hard/tough/resilient/steady.
Luboš Motl v 8:15 PM
Share