A Cambridge video introduction to strings

Giotis has told us about a new 30-minute video presenting the basics of string theory and related matters:


It's a fun conservative video focusing on the physics ideas and not the sociological šit that tries to surround string theory in the recent decade. 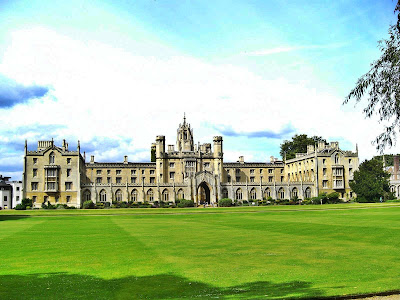 I've never stopped counting Cambridge among the top 5 theoretical physics places on the European continent (a concept that includes certain nearby islands) so it's natural for them to offer some seriously good video.


The host and the generalized mastermind of the program is Kerstin Göpfrich who is smiling all the time. In fact, it seems that everyone is smiling much more than what you would statistically expect – and this excess may look like evidence in favor of some Hillary-style unnaturalness in the smiling patterns. ;-)


Maybe they're trying to emulate the first important string theorist who is interviewed, David Tong. David Tong is a great guy, I knew him very well in the Greater Boston area, and indeed, he was smiling all the time and his enthusiasm is largely contagious. Aside from important research, he's also produced various interesting lectures and free textbooks on string theory etc. I recommend you to Google search for those if you're at least slightly interested. You may also watch fourteen 1-hour-plus lectures on quantum field theory which have actually been watched by hundreds of thousands of people.

Tim Adamo is another researcher who is probably not as a natural smiler – he's a naturally muscular guy – but he smiles a lot in the moving pictures, too. His research focus is on twistor-based and Wilson-lines-based calculations of scattering amplitudes but it seems to me that he knows a lot of string theory. His main excitement about string theory – it holds also/mainly for his twistor formulae – is that lots of Feynman diagrams may be replaced by one within string theory. Later, he also spends quite some energy by explaining the important point that supersymmetry really makes things simpler and cleaner. It doesn't "add mess" which is how supersymmetry is often misinterpreted in the popular press.

At any rate, the video is trying to be more technical than the generic popular introduction to string theory that millions have watched. The physicists in the show don't avoid words such as "general relativity", "its supersymmetric generalization", "scattering amplitudes", "gauge theory", "one-thousand-loop Feynman diagram contributing to 6-graviton scattering", "punctures", "gauge fixing", "anomaly-free operators", "conformal transformations", and so on. Of course, I don't expect viewers to understand these concepts perfectly if they haven't understood them to start with. But it may give them hints about some essential ideas they may want to be interested in, or make Internet searches about.

After Adamo, Tong returns with his somewhat more philosophical comments about the need to use Nature's own language, that of mathematics, that nevertheless makes the progression logical. In another segment, Tong tries to explain the Dirac equation as his favorite equation. By pure thought, Dirac could predict antimatter as well etc. (I wouldn't historically agree with David's assertion that Dirac needed 2 years to see that his equation led to the spin – it was really a starting point before he began to search for the equation – or it had negative energy equations – he surely realized that very early, too.) When asked why people found the abstract idea of strings, Tong sensibly talks about flux tubes between quarks.

To some extent, you may always see some degree of local patriotism and self-promotion. Dirac was clearly one of the big guys connected with Cambridge.

Part Two is coming on October 17th. Update: I've added the link to it at the top.

David Tong is explaining solitons and flux tubes – those are words that appear rather frequently in David's papers and research talks.

Kerstin begins with the ancient history of elements and the more recent history of nuclear physics. Something is said about the uncertainty principle. It's rather fast. I would probably not absorb it if I didn't know these things. But it's pleasant to look at Kerstin's smile and gestures. ;-)

She shows what the magnet on the bottom side of some tablecloth does to the ferromagnetic dust on top of it.

David immediately begins some more hardcore talk. Strings may be obtained as solitons – while they are elementary in string theory. What is elementary and what is made of something else often depends on the formalism or viewpoint or "the choice of a dual theory".

He writes down some relevant QFT equations for solitons. The covariant derivative of a Higgs field vanishes. Some magnetic field is stuck within the resulting tube. Kerstin called it the Tong equation which is a bit exaggerated, David, isn't it? ;-)

Dr Tong is drowning in the tub. I've already seen it. Despite the last bubbles of death at the end, he ultimately saves his life. Using a blug drug, he shows a vortex in the tub. While he is saying that he wants to study everything in terms of mathematics, he shows some incredible solitonic strings-of-excited-water produced by a pump connected to an aquarium.

David takes a ladder... and becomes a construction worker? No, he is going to produce vortices using his hand. Another incredible thing – some very thin and long solitonic vertical string-of-vacuum in the water. He has to become a smoker to show some solitons shot by a cannon next to a cigarette. He sees solitons everywhere.

What holds everything together? You can ironically find out if you smash things so hard that they fall apart. No one has ever seen a quark. The elastic band can't be beaten. "No one knows why only the color is confined," they claim. Well, it depends.

There's a fun research discussion between several physicists (Amihay Hanany is one of them). It looks very close to an authentic one but I would still figure out that it's mostly staged, anyway. ;-) Tong mentions the Clay Institute $1 million problem on turbulence. Additional scenes of Tong's taking a bath. Riding on a scoobike, playing soccer in his office etc.

For 5 years, he tried to figure out why color was confining, so he studied a different system with scalars etc. and found all the solitons. It sounds like an almost exactly sensible description of a meaningful research project but not quite. ;-) I would have to look at the papers to know what he was actually trying to do.

At 15:15, they switch to black holes in string theory.

Kerstin says that string theory has unexpected applications and David says something even more original. String theory has been immensely helpful to make us frame the right questions, especially in the black hole physics context.

They switch from David to Ms Sasha Haco, basically a hot yet smart Hawking's PhD student. (Does Hawking use similar ways to hire the students as Trump's Miss contests LOL?) Black holes are cool and a useful playground to test ideas etc. Haco correctly defines a black hole as a region with gravity that is so strong that not even light can escape, and therefore they look black. (That's seemingly trivial but some folks can't even get this far – they totally incorrectly define a black hole as something with a singularity.)

Haco actually seems to say a statement – a typically Hawking's but already admitted to be wrong – that pure states are evolving into mixed states. Haco talks about three laws of black holes – soon reinterpreted as thermodynamics.

Maybe it's just my feeling but Kerstin asks Haco a bit more "skeptical" questions, like if she were a journalist and Haco were in the wrong party and Tong in the right one. Even if that's the case, and it's just my impression, there could be somewhat good reasons for this attitude, of course, such as this one.

Haco explains that she does a theory work – pen and paper instead of spaceships flying to a black hole. When asked, Haco reveals that she wants to have a PhD thesis on a solution of the information loss problem.

Finally, she's also led to write an equation. Hers is \(S=A/4\), arguably a more fundamental one than the previous Tong equation. ;-) Kerstin notices it's a simpler equation than the previous one. Sasha Haco confirms that simpler equations are often better than others. There's a spacetime diagram on the blackboard and some variations of some fields. Sasha talks about the pair creation near the horizon.

What will the solution of the information loss problem bring to us?

We will see how quantum mechanics and GR actually work – in a way that will allow us to discover new physics.

In the final minute, Kerstin says that we may forever remain ignorant on whether string theory describes the world around us. But even if that's the case, it will be immensely helpful as a mathematical tool to do physics. That's why the physicists from Cambridge and its suburbs – i.e. the rest of the world – will keep on using string theory.

And Kerstin Göpfrich is now able (at least that's what she says) to understand why it's so important to study mathematics, the language in which God wrote the world.
Luboš Motl v 10:25 AM
Share