The first visit to a post-Brexit Britain

Once a year, the Eurasian Council of Foreign Affairs organized by the – extraordinarily skillful – Kazakh minister of foreign affairs Mr Idrissov is gathering somewhere. It's mostly composed of former European politicians – from the Austrian (and EU) minister of foreign affairs Ferrero-Waldner to (Polish) president Kwasniewski and British former finance minister Lord Lamont, to Serbian B. Tadić, Italians Martino and Frattini, Norway's Bondevik, and so on – mostly people whom I know well. 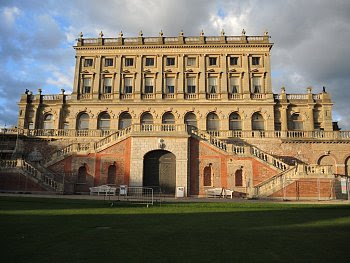 This year's meeting took place in a very beautiful chateau somewhere in Berkshire in South England, about one hour from London by car. The chateau was built in 1666 and transformed to a luxurious hotel in recent decades. It's simply the good old England. I am tempted to sing along with the Czech songmaker Mr Jan Vodňanský: "Just like in old England, I will pour whiskey to a glass." It feels as if it weren't snowing heavily [a Czech idiom, it feels relaxed like if nothing dramatic were happening].


And in Great Britain – in contrast with the threats and warnings by the warriors against Brexit – it's indeed not snowing heavily in the people's everyday lives. Nevertheless, some unease is seen everywhere. My first impressions: 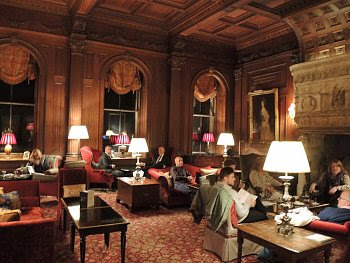 — Propaganda, not ideas rooted in reality, persists on both sides which makes people somewhat anxious. Several days ago, the Nobel prize in physics was shared by three Britons including Prof Kosterlitz. He has announced that he will give up his British citizenship (he may also have he U.S. citizenship) because as a scientist, he needs to move freely all over the world. Is it possible that a scientist, otherwise undoubtedly an intelligent person, has been persuaded that Brexit means a restriction on his trips all over the world? If that's the case, he's probably not too intelligent.


— Britain is hesitating, it doesn't want to start the matters, it doesn't seem to know that, as our experience has shown, the things may be done really quickly and effectively (in early October 1992 i.e. 3.5 months after our referendum, more precisely the elections, we had already solved all the conceptual issues). They have nothing.

— The British prime minister Theresa May is making her decisions without any enthusiasm and everyone can see it. I came to Britain just hours after her final speech at the Conservative Party's conference in Birmingham. I can't interpret her speech differently than as the ultimate, irreversible divorce of this so dear – for many of us – party with the heritage of Margaret Thatcher. Almost all the leaders of this party have been working on this divorce for 25 years – and this activity culminated with David Cameron – but Theresa May's words are shocking to me. It's necessary to help to the working class, denounce the capitalists who systematically exploit the market to get richer, it's necessary to admit that the government is doing lots of great things (and it's not necessary to reduce its size) and so on and so on. My conclusion is that with these opinions, the Conservative Party could have easily remained in the EU. It would fit in nicely. 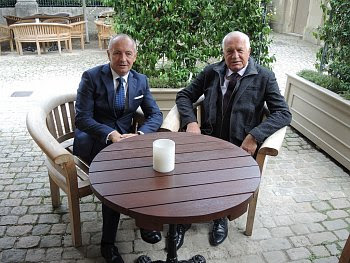 Sitting with Hon Ambassador Sečka for a while

Also, it cannot be a coincidence that the eternally young Tony Blair quickly reacted and threatened his return to politics because his (and the Labor Party's) program is being robbed or hijacked by Ms May.

The British delegation at the conference was interesting. It included the duke of York (for the royal family to be represented) as well as members of cabinets and the Parliament. During every meeting, one of them reminds me of something. Lord Lamont was the finance minister who was signing a deal about the protection of investment with me in 1990 – when I was on my life's first visit to the U.K. He has told me that already in 1990, I considered the EU similar to the communist Comecon. I was rather pleased by this piece of his memory. 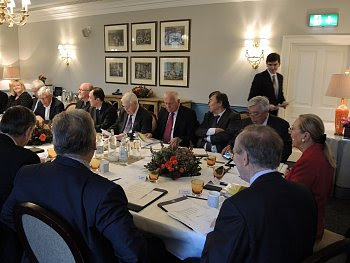 A picture from the morning proceedings

Jack Straw, the Blair-era minister of foreign affairs i.e. someone who should understand the world and Europe, including the Central and Eastern Europe, has asked me about the election system during communism and the detailed rules for the participation of the independent candidates. I told him that while no such conditions were clearly formulated, there was quite some certainty that hours after his announcement of the candidacy, the "independent" candidate would be relocated to a prison. The simple-mindedness (and ignorance) of these people knows of no limits.

In Great Britain, they have held the second referendum about the exit from the EU (if we count the referendum that was deciding about the European Communities). The transformation of the opinions is amazing. Conservative Party's Lamont told me that he voted "Stay" in 1975 but "Leave" in 2016. Labor Party's Straw's votes were reversed. Both have been top politicians in their parties. This would deserve a deeper analysis. 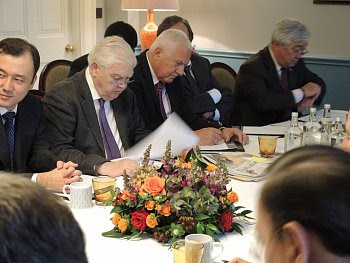 Lord Lamont is on the right side from me, Kazakhstan's minister of foreign affairs Idrissov on the other side.

Something is changing, however. I am usually the only person who is fighting against Maastricht. However, it was different here. The main anti-Maastricht warrior was the Norwegian former prime minister Bondevik and none of participants was protesting against his criticisms.

Former Italian minister of foreign affairs and defense Antonio Martino, a member of the classical liberal Mont Pelerin Society, is critical of the efforts to balance the governments' budgets because these efforts lead to the decreasing defense spending (!). Moreover, he thinks it's wrong that the EU has 28 national budgets while the U.S. only has one (!). So according to his opinions, Europe should fully integrate. That's what we can hear from an ex-student of the Chicago University (and Milton Friedman personally) and a minister of Berlusconi's governments. On the contrary, his colleague in the government Mr Frattini was explaining that it would be unrealistic to introduce the Italian constitution in Afghanistan because it couldn't have any effect over there. I entertained the audience by the remark that I am not sure how applicable the Italian constitution is e.g. in Sicily.

The demonization of Trump and Putin is omnipresent. A part of the debate was about the question what will happen when Trump "comes in". I was turning the question upside down. What will happen when Hillary "comes in"? I insisted that America needs a change and Hillary is incapable of bringing one. The Kazakh minister vigorously protested against speculations that Putin is working on efforts to rebuild the Soviet Union. He said that Putin isn't silly enough to rebuild the Soviet Union. He just wants loyal neighbors. This seemed like a rational thought to me. 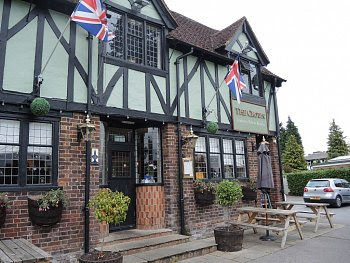 A small pub in a village where no migrant was present.

My foreign trips are being increasingly reduced to pure conferences. There is no sightseeing. But the truth to be told, the accommodation in a chateau from 1666 in the British countryside is the best sightseeing of all. But maybe I should no longer call these texts my "Travel Diaries". But maybe the name is fine, after all. Between the end of the conference and the departure of the flight, we had some time for a late lunch in a small "classical" English village and a pub. I was intrigued by two details. In a relatively cold weather, children were running in shorts and short skirts and short-sleeved shirts. They seem to be preparing for the cold weather that must start after Brexit. There was also a "public meadow" over there equipped with a detailed instruction manual how to use it. One regulation said that one human can have at most four dogs.


Off-topic: according to NPR, not just Elon Musk but Barack Obama wants to shoot people to Mars for them to live there. Decades ago, Czech musician Mr Dalibor Janda estimated that (soon to be obsolete) horses and trees would be deported to Mars in 2005-2006 and they would be soon followed by humans. ;-)
Luboš Motl v 8:01 PM
Share