This is a short comment elaborating upon Euro-koruna cap may collapse already in 2016 which I described in September.

Note that the Czech National Bank has been artificially weakening the Czech crown (koruna) – much like its Swiss counterpart used to weaken the Swiss franc – since November 2013. It's been over three years now. One crown wasn't allowed to strengthen past CZK 27 per euro. For a year, the rate was about 27.5 but in the recent year, it was really close to 27.01 at all times.


Well, up to today's morning. The middle rate went from 27.01 up to 27.11 or so. See that the two-hour spike in EURCZK was statistically significant, so to say, resembling the LIGO discovery LOL. 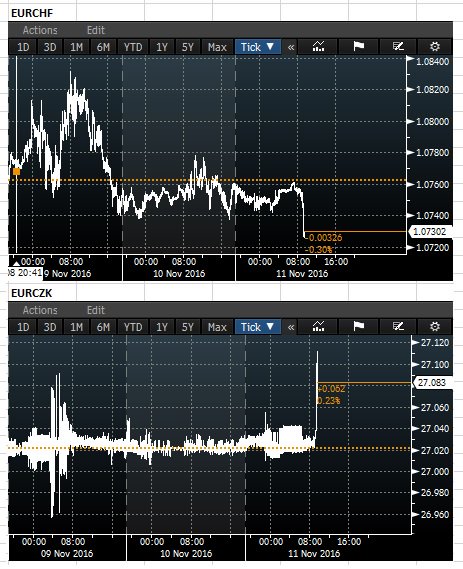 EURCZK is the lower chart. Arne also noticed that there was the opposite spike in EURCHF: the Swiss franc anomalously strengthened in this hour or two. The explanation must be that someone was selling lots of crowns and buying lots of francs. Who was that? Almost certainly the Czech National Bank that intervened and decided to diversify its reserves a bit, adding some Swiss francs instead of all the euros.

You may check that during October 2016, the Czech National Bank reserves jumped from EUR 73.4 bln to EUR 78.4 bln – by a whopping five billion euros. The increases seem to grow exponentially by a factor of 1.618 or so every month LOL.

There must be a physical limit to the weakening. The bank must be printing physical banknotes, I think. This 5 billion euros in a month is some 130 billion crowns. In terms of the most precious banknote, CZK 5000, it's over 20 million banknotes per month. Almost a million banknotes a day. I don't know how many banknotes – which are rather fancy papers with features – they can print every day. But I still think that due to the acceleration of the speculations, the limit is rather likely to be encountered and the bank will become unable to keep the floor.

If you have doubts about EURCZK and its "guaranteed" downward trend, you may at least short it whenever EURCZK spikes again, perhaps close to 27.10. As the inflation rate picks up in Czechia and elsewhere (and the insane EET cash registers will contribute to the inflation as well), it seems increasingly unlikely that they would decide to make the floor even weaker for the crown. So it's probably "extremely" unlikely that the crown will weaken past 27.35 or so again.

The floor should be officially abandoned sometime in 2017. Well, I think that only the commitment that "it won't be in 2016" was pronounced loudly. Vague commitments that it wouldn't be in the first three months of 2017 were pronounced by the central bankers as well, but those were much more vague and I feel that they're just tricks to discourage the speculators while avoiding straight lies.

Moreover, even the hard commitment may fail due to the physical limitations I have mentioned.

At some moment, the amount of speculation may turn out to be too huge and the central bank may be forced to stop this charade before it promised. My reasoning is simple. If the banknote printers were able to increase their production by a factor of X, e.g. five, it would mean that most of the investments into these printers were wasted. So the limit of the capacity is unlikely to be hugely greater than what they're already using and a sufficient acceleration in the speculation may just force them to quit.

The expected strengthening of crown relatively to the euro is some 5-25 percent. No one really knows. There will probably be some volatility when the level 27 is breached.
Luboš Motl v 12:12 PM
Share