First, a physics anniversary. Abdus Salam – see a TRF biography – died exactly 20 years ago, i.e. exactly 80 years after Franz Joseph I. He remains the only Muslim Nobel prize winner in physics (there are 2 in chemistry, 2 in literature, and 7 in peace). He's done a lot for the Pakistani physical sciences, his nation's pride, for the Standard Model but also co-fathered the Pati-Salam grand-non-unified models later. He's been a great scholar – even when it came to the English and Urdu literature. I think that he's also a proof that already in the mid 20th century, ingenious folks from poorer countries had an easy access to the top Western scholarly institutions.


Tonight, it will be exactly 100 years from the moment when our former ruler Franz Joseph I of Austria died in his Schönnbrunn Palace, Vienna, at the same place where he was born 86 years earlier, in 1830.

Around 9 pm, he asked his servants to wake him up at 3:30 am in the following morning, just like they did on that day. Because of so much work, he had no time to be ill, everyone believed him just days earlier. However, his fever surpassed 38 °C due to pneumonia, he died at 9:05 pm, and the imperial office had to report that "her majesty of death has touched Austria-Hungary with her firm hand" and an avalanche of obituaries was started. Check the sorrow of his loyal fans in Arkansas. ;-) 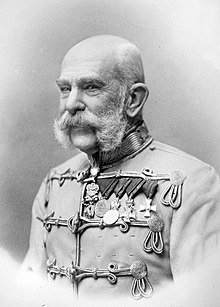 It's not bad to live for 86 years but the duration of his tenure is even more striking. He has been the emperor for 68 years – the equivalent of 17 four-year terms. Which U.S. president can boast about the same survival skills?


He became the Austrian emperor – and Czech and Hungarian king, among other things – in the revolutionary year of 1848. He was only crowned as the Hungarian king in 1867; he was able to govern all other lands without a crown.

The old Austrian anthem was the "Emperor's Song". It was later stolen by the Prussians and the Nazis whose multicultural descendants keep on abusing it today.

You may imagine that the duties were somewhat ceremonial and he spent much more time with hunting, parties, and other things. More difficult everyday work was done by his employees. Most important, Alexander von Bach became the interior minister (1849-1859) and basically preserved a highly centralized power, although not quite as authoritative one as his predecessor Metternich.


The most widespread translation of "be careful" into Czech is still the idiom "give yourself a Bach" ["dej si bacha"] which refers to the need to be careful about the former minister of interior.

At any rate, Franz Joseph I was our king throughout the second half of the 19th century and the early 20th century – so most of the old large Czech factories (such as Škoda Works in Pilsen and Laurin and Klement, now Škoda Auto, in Mladá Boleslav) were founded during his tenure. Yes, Pilsner Urquell had existed 6 years before Franz Joseph I took over.

In the Czech lands, he was known as "the old Walker" ["starej Procházka"] which is funny because "Procházka" is a typically Czech, 6th most widespread surname in Czechia (among top 8 surnames, the order is exactly the same for the feminime versions of the surnames). The surname means "a walk".

In 1901, Czech newspapers published this photograph of the emperor who was opening a new state-of-the-art bridge in Prague named after Franz I (not Franz Joseph I – another bridge in Prague was named after him). These days, it's known as the "Legion Bridge". The caption said "A walk on the bridge" ("Procházka na mostě") which made the Czechs invent the joke that "A walk" is actually his name.

However, some historians who probably know much more about these matters argue that the nickname "the old Walker" is much older, from the 1970s. The arrival of the imperial horses used to be announced by a cavalryman who was old and whose name happened to be Procházka. "Old Procházka is already coming," people were chanting, and the emperor inherited the name from the employee, too.

Most Czechs were sort of satisfied in Austria-Hungary and the plans to build an independent country were only becoming a part of the mainstream during the First World War and, unsurprisingly, energized by Austria's loss in the great war. Maybe, if Austria-Hungary had won the great war, it could still be around. The 20th century could have seen a completely different arrangement with states that would be much more multilingual – a different history than the 20th century European history based on the nation states could have emerged.

This alternative Europe could have arguably avoided the Second World War. No Hitler could have annexed "Austria" because the word "Austria" would mean something very different and not quite as supportive of some race-based German nationalism. And in such a Europe of 2016 with Austria-Hungary, people would probably feel that "we already have enough multiculturalism in our own empire" and the European Union would never be born.

Many things could have been different but I think that the overall characteristics – the total love or hatred or misunderstanding between different ethnic nations and many other things – would probably be rather similar to what it is today, anyway.

In recent 3 months, I carefully watched the 12 episodes of a new serial "I, Mattoni" shot by the Czech Public TV. With a $4 million budget, it became the most expensive program ever shot by the Czech Public TV and I think that they've proven that they still know how to do these things well (and I disagree with the numerous negative reviews by the critics that have emerged in recent days).

Just to be sure, it's a serial about the life of Heinrich Mattoni, the guy who gave the name to the most famous Czech mineral water brand. He was a guy from a wealthy German-speaking family (with some Italian ancestry) in Carlsbad, Sudetenland, Bohemia. He wasn't a terribly "nice" guy but he was very human and skillful. As a young man, he was selling the Carlsbad wafers, working as a gigolo, and by a trick, he took over a license to distribute the mineral water from a spring. His company grew, he married a girl from a rich family who was fainting because she loved him so much – but she despised him when they were old.

He bought lots of things, started new business, spread his company all over the world, and solved many problems by payments. He bribed a young guy whom his most beloved daughter (dying of tuberculosis) love in order for them to have a romantic relationship which would make this daughter happy in her final days. He bribed the boyfriend of his second daughter to leave her because he wasn't the right one – although Mattoni later decided it was a wrong judgement. And there are many other women in Mattoni's life who played some role – including his highly emancipated modern Czech girl whom he fell in love while in the U.S.

In the final episode, he had to fight against the Czech bureaucracy. In Austria-Hungary, the Czechs (and their apparatchiks) already had a lot of autonomy which wasn't always good for the business. So Mattoni had to become a "flawless Czech" by bribing lots of patriotic clubs and similar things. He also sent a "Mattoni" balloon over Prague. The balloon crashed which seemed like a bummer but this event actually turned "Mattoni" into a household name.

He needed some stamps to have a railroad – he had already bought a beautiful locomotive in Pilsen – and the Czech aßholes in Prague were deliberately delaying the bureaucratic process. At the end, the problems did get solved with the help of Vienna. He's always had very close relationships with the empress wife, the wife of Franz Joseph I (of this blog post), Elizabeth of Bavaria, who was assassinated (stabbed) in Switzerland by an Italian anarchist. (About 10 other relatives of Franz Joseph I died of similarly unnatural causes.) But another important guy from the imperial family came to Carlsbad again, loved it there, and asked something like: "Perhaps our Czech friends have some problems in allowing the railroad to be built?" The Czech bureaucrats suddenly šitted into their pants – something that worked not just 110 years ago – and the railroad was built soon afterwards.

He organized a big party and as a good manager, he used the meat from horses and oxen that were no longer needed (because the era of trains was coming) to feed the guests. The last episode says that he died shortly after the railroad was built – and shows his wife how he kisses him etc. That disagrees with the omnipresent "story from a later time" in which Mattoni was sick for a long enough time to write a thick book and his obnoxious wife was turning his life to hell – and she did everything she could to prevent him from publishing his memoirs.

This inconsistency was bothering me for some 12 hours but then I realized that it may have a nice, consistent explanation. The 12th episode – with the kiss and the short life after the railroad success – could have shown the final days of Mattoni's life in the way in which his wife wanted it, i.e. a story censored by his wife, while the previous episodes were getting us ready to accept that Mattoni's wife would censor it. 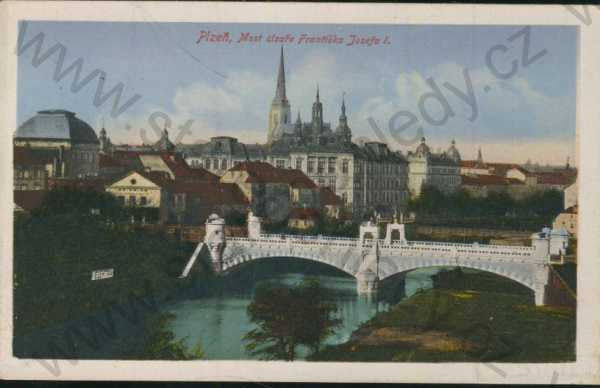 The Franz Joseph I bridge in Pilsen, the last stone bridge in Bohemia (built 1913). The story how the bridge – and the avenue going through it – was being renamed is a funny example of how the Czech history had to rewrite things often. After 1918, when Czechoslovakia was founded and the Austrian monarchy was no longer too hot ;-), the bridge was renamed as Wilson Bridge, after Woodrow Wilson who helped Czechoslovakia to be born. In 1948, Wilson was too capitalist and the bridge got renamed to the Stalin Bridge. At some moment after Stalin died, Stalin became a liability even for his comrades, so the name was returned to the Wilson Bridge.

The avenue – the main "commercial avenue" in Pilsen, a sort of a counterpart of the Wenceslaus Square in Prague – was called the Jungmann Avenue after 1918 (after a Czech patriotic revivalist Jungmann – don't be fooled by his German name) before it was renamed to the remarkably apolitical Bahnhofstraße (Train Station Street) in 1939 for six years of the Nazi occupation. After the war, it became the Moscow Avenue. After the fall of communism in 1989, Moscow sounded a bit obsolete so the name was changed to something similar, also a geographic name related to a large country.

Well, as you may guess, it's called the American Avenue now. ;-)

My broader point is that most of the Czechs are unusually "flexible" if you want to avoid the term "spineless". I usually view it as a character flaw but there is a perspective from which this "flexible flavor" smells very modern and I am almost proud about it and the colorful history of bending and re-bending that my nation had to experience.
Luboš Motl v 9:32 AM
Share