Indoctrination by Soros-distorted institutions is a primary culprit 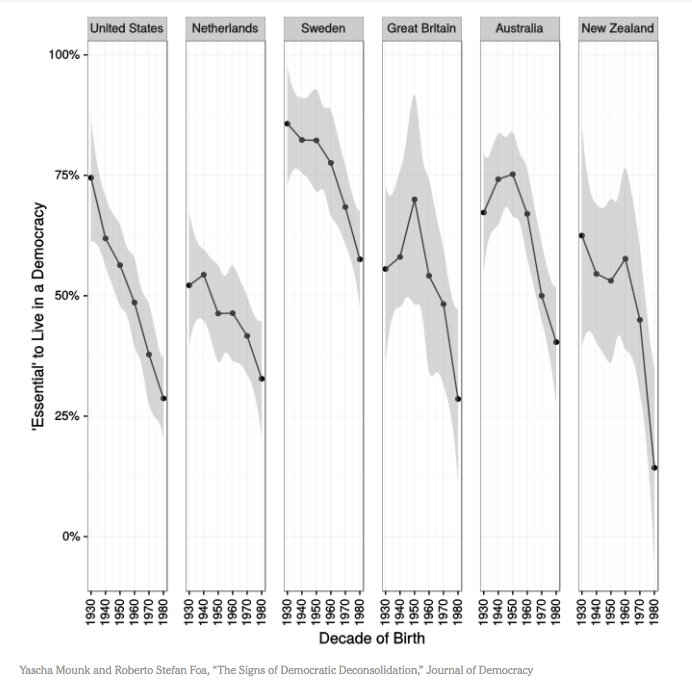 It shows that the percentage of the people who think that it's "essential" to live in democracy is basically an increasing function of age. In the most extreme cases, while it reaches almost 80% for some of the oldest generations in some countries, it drops as low 19 percent for the millennials or Generation Y – the young folks born around 2000 plus minus 5 years or so.


The worrisome insight was noticed by Kevin Drum, Brian Klaas, Bobby Acharya, and The Pig, among others.


There are lots of questions: Do I believe that the trend is so bad? What do these young people actually want? Who is responsible for these disturbing answers? Can the trend be reversed? Will it be reversed?

First, I do think that the trend is this bad. When my interactions with folks who are approximately 20 years old touches politically sensitive issues, I am often stunned. They believe various bogus things – most of this youth undeniably buys feminism, climate alarmism, all kinds of trans-homo-metro-sexualisms you can think of, multiculturalism, uncritical support for the EU, U.N., Soros' NGOs, and other offensively manipulated bogus causes. According to a simple search, the millennials have been brainwashed by Harry Potter, too (also to elect Obama). ;-) Only millennials consider "socialism" to be mostly a good word (it's an insult for majorities in all other age groups) – and that's where much of the support for Sanders came from, too.

It's very clear that they've been taught these things at schools. They were also trained to uncritically believe those media that communicate in this stupid way. The American voter has shown that it's mature and can easily see through the naive pro-Hillary coverage in the media etc. but if you only looked at the young American voters, the picture would be far more troubling.

And because these bogus causes have occupied most of these millennials' brains, they don't have any room left to respect the actual ethical and civilization values such as freedom, democracy, independence and originality, courage, honesty, patriotism, genuine skills, expertise knowledge of some hard facts that is hard to get and goes beyond superficial clichés, the need for checks and balances, and many other things.

Why is it that this young generation that has such a poor degree of attachment to the Western values? Well, I think that it's because it's the first generation in recent 500 years or so that was brainwashed by a modern, manipulative, anti-Western education system. The previous sentence may sound exaggerated but I think it's not. I really do think that in recent years, the indoctrination at schools (and other places where young people are being concentrated) has become worse than what I was exposed to as a kid during communism.

You know, in the Soviet bloc of the 1980s, some of the politically sensitive subjects were distorted to become more convenient for the communist regimes. But they weren't ever ludicrously distorted, at least in Czechoslovakia, and even when it came to the milder distortions, they didn't matter much because a majority of kids refused to take this wisdom too seriously (at least in the 1980s).

So you know, we were still taught to admire the Enlightenment and its heroes, capitalism as a positive step following feudalism etc. – except that socialism and communism were presented as "further improvements" of this historical path. We were taught to admire the classics of music, literature, arts, and sciences – and the things that they actually believed. Sometimes, we were implicitly or explicitly told a lie – e.g. that all of Czechoslovakia was liberated from the Nazis by the Red Army. But in practice, there was almost always a kid who raised his or her hand and disagreed and the truth basically got to all the kids, anyway.

Virtually all people in Czechoslovakia knew that folks in Western Europe were wealthier etc. and we understood that it was because of their better system. (During my visits to the Soviet Union, I learned that this experience did not generalize there. Most of their population probably bought all this communist stuff.)

And as I said above, even if you could find some subjects in which the kids were being told some highly inaccurate or misinterpreted things, most of them didn't take these things seriously. It's because almost none of the teachers were true communist believers in the 1980s – several of my essential teachers at the basic schools were actually staunchly anti-communist (although I've been taught by a couple of less memorable true communist believers, too). And the communist regime didn't optimistically believe that it was possible to make the youth believe the orthodoxy. And if a communist were an optimist willing to brainwash the kids brutally, he wouldn't really know how to do it effectively because the communists haven't gotten through the courses of P.R. that college students in the West are familiar with these days.

I believe that the result was that my generation, Generation X – which is basically equivalent to the Czechoslovak concept of "Husák's children" (babies born during a natality wave when the neo-Stalinist Czechoslovak president Gustáv Husák increased the subsidies for families with children) – has converged to the opinions and knowledge about the world that was rather sensible, close to our Western counterparts at that time, rooted in the traditional Euro-American values, and we were ready to switch to freedom and democracy again.

Let me mention a famous conversation of Mr Miroslav Štěpán (longer), a top Prague communist, with the workers in ČKD Prague. Days after the 1989 Velvet Revolution began, he told them that the party primarily wanted to rely on the worker-peasant class. And in no country, neither capitalist nor socialist nor developing country, it's possible for 15-year-old children to dictate what the policies should be and when the president should leave. In no country. ... The audibly dissatisfied workers started to yell "We're not children! We're not children!". :-) This may have been the moment when the 1989 children's revolution turned into a revolution of the mainstream adults, too. BTW Štěpán tried to say that he wasn't talking about the workers but it didn't help and they began to shout "resignation, resignation".

In Czechoslovakia, the fall of communism was referred to as the Velvet Revolution and it was started by a rally of college students in Prague (who were beaten by the communist police). It was really "kids" who sparked the revolution. I tried to do similar things as a younger, high school student in Pilsen, a smaller city. But as a former teenage dissident, I obviously do count myself as a part of the Velvet Revolution Generation X.

Things are very different today. The kids are being educated differently and as a result, they "fight" for very different values than those that we really fought for.

First, the truly evil people who actively want to brainwash and morally cripple the kids – like George Soros – do know some psychological tricks how to achieve their goals. I think that one of the key conditions is to make the obedient kids believe that by being obedient, they're actually extremely independent, courageous, modern, full of energy. Teenagers often have their own preferences, communities, ways of thinking, and an essential tool of a successful propagandist is to positively correlate all these youngish things with the ideology that the kids "should" believe.

So when the kids were trained to believe various anti-democratic, anti-freedom memes, multiculturalism, uncritical admiration of the European Union, climate cataclysm, and other things (in Czechia, also the need for the government to snoop and see what all the people are doing or at least what they're being paid for), they were actually told that by accepting all this garbage, they are basically showing their youthful energy, opposition to their parents, and so on. And needless to say, it's partly true. Most of these kids' parents prefer the democratic system and a common-sense attitude to the climate.

However, what these kids aren't told is that by adopting these opinions, they are being turned into slaves of some other adults – much more toxic adults and "would-be grandparents" such as George Soros (sorry that I repeatedly use this name as a personification for the "old aßholes" behind the terrible trend, I want to be clear and consistent – just to be sure, I obviously don't believe that it's all about this single man). As a young Jew, Soros has worked hard to help the Nazis to confiscate the Jewish assets. His present jihad against Israel is nothing else than a continuation of his pro-Nazi youth. Soros is a piece of a truly nasty individual and you really don't want to resemble this man much. But this important fact – that Soros represents what the great men of the Western history have considered a lethally dangerous poison – is being hidden from the youth.

But maybe it's not all about schools. Some folks answering the question What the F*ck Is Wrong With Millennials (asked by one of them) suggest that the millennials' problem is that they're the first generation that has lived shielded by the "block button" and by the "safe spaces" i.e. the first generation that could spend their teen age in a bubble.

The kids were "just kids" to some extent but they are getting older and at some moment, they will be taking over the world. Most of the older people will have died when these non-democratic millennials (plus younger folks) decide about most of the assets and political decisions in the world. If and when the support for democracy is often below 20% among these folks, isn't it guaranteed that the Western civilization will turn into a hybrid of the Islamist regimes and some dystopias from science-fiction novels such as 1984 by Orwell and The Brave New World by Huxley?

I am not sure. As far as I can see, this risk is very real. But there's always a hope, too. The millennials may become more sensible when they're 30 and their present views may be later reinterpreted as irrelevant signs of their current cluelessness. Alternatively, the following generation – perhaps the Generation Z i.e. post-millennials, iGeneration, Founders, Plurals, or Homeland Generation – will be different from the millennials.

I actually hope and think that the kids who are about 7 right now will be better, less indoctrinated, less hypocritical, and more pro-freedom, pro-democracy, and pro-common-sense than the millennials. Don't forget: Their characters are still being formed. It's not clear what they will be hearing at schools.

It would be great if the anti-Western indoctrination at schools were stopped, perhaps thanks to the looming presidency of Donald Trump, and the seemingly unstoppable drop in the graphs pointing to the disappearing freedom and democracy later became just a blip – a narrow interval of the millennials born around 2000 who were ideologically morally crippled by George Soros and his equally nasty comrades. I think it's clear that if there was a period in which PC-like, anti-democratic teachers and instructors were overrepresented at schools, a good politician will have to create conditions in which they are underrepresented – for a comparable period of time.

We shouldn't lose our optimism. And after the elections in the U.S. last month, this is not an appropriate time for any friend of freedom and democracy to be pessimistic let alone defeatist.
Luboš Motl v 2:40 PM
Share