The name of Mr Jindřich [=Henry] Forejt appears in three previous blog posts. He was the director of the Prague Castle protocol or the Presidential Etiquette Steward, if you wish, a man who was deciding in what order visitors of the Czech president should be ordered and lots of similar issues. 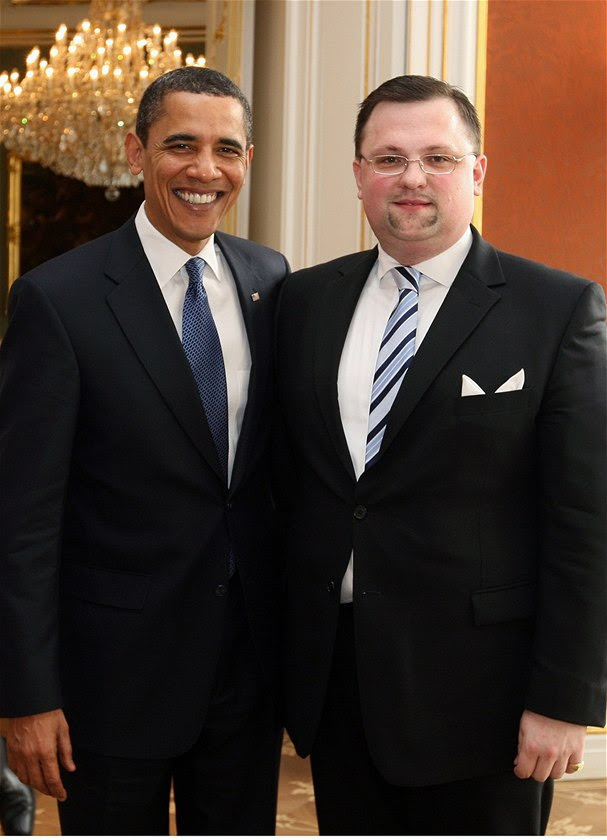 Search Google Images for "Forejt Bush" or any combination like that, you will see that he's been everywhere.

He was sometimes known as Mr Forejt Gump because just like his approximate namesake, he has appeared on many more photographs of famous politicians than what you would expect by mere chance from a professional who should work behind the scenes.

I believe that the first time I met Mr Forejt in person was in March 2007 when ex-president Klaus invited me and a few other skeptics to a lunch in D.C., a month after I helped to turn Klaus into a celebrity among the U.S. climate skeptics by translating an innocent interview that became a Drudge Report #1 story for the day and was therefore widely reported by other media including Fox News.

The journalists especially liked to quote a sentence implying that Al Gore wasn't sane: this Fox News screenshot was based on my (somewhat spicy but basically accurate) translation. Due to the Drudgelanche, this blog received hundreds of thousands of visits on that February 2007 day.


Some preparations of the etiquette were needed for that visit of mine, too. But I believe that most of those were done by the employees of the Czech embassy in D.C. Their ladies have called me and informed me that it was impolite for a Czech citizen to reject such an invitation from the Czech president. So I paid some $800 for an air ticket and a hotel and I wasn't sorry about that. This encounter was nice and I liked the U.S. capital – perhaps more so than how much I like New York and other cities.

I am no expert in these matters but given the praise that Forejt has received from such a diverse collection of presidents – he already started to work for the Prague Castle as an intern under Václav Havel, was promoted to a full glory by President Václav Klaus, and was kept and appreciated by Miloš Zeman, too – I am confident that he must be good (or must have been good) at his job. Klaus – who expressed his deep sorrow and disagreement with the liquidation of Mr Forejt – claims that foreign politicians have often been jealous about Klaus' having Mr Forejt.


Some days ago, the public learned about plans to fire him from the job and/or move him to the place of the ambassador to the Vatican. The reasons seemed confusing. I read about a possible professional mistake a few days ago. During a visit of Zeman to the Vatican, he organized the visit in such a way that top Czech church officials and top Czech politicians appeared in the same room – which is a mistake, especially according to Pope Francis who always tries to separate the civilian, irreligious world from the blackaßers (how do you call the church officials who have a black aß in English?).

But these comments sounded implausible as a justification for the removal of Forejt. Who actually cares about such details? Even Pope Francis probably just pretends that he cares.

For some time, we would know about Forejt's resignation "due to personal and health reasons". Only today, all the media exploded with stories although the reason has been known for two days or so. A discrediting video was found – sent to some media. I haven't seen the video but Forejt is seen to be half-naked and enjoying some drugs. It may be just marijuana or perhaps cocaine but I don't know and I don't understand these matters at all. And there could have been male prostitutes on the video, too. I suppose that it follows that Forejt is gay, something I didn't know – but I guess it's not unusual among etiquette and beauty experts. ;-)

Top Czech investigate journalist Mr Janek Kroupa informed us about some details about the origin of the video. The video was offered to some media – initially for $100,000 before the price dropped when the media said that they couldn't verify the veracity of the video – by a guy who has spent 6 years in the jail for robbery. So it seems that the "film director" wasn't Steven Spielberg. Kroupa says that it's likely that this recidivist is the de facto if not de iure owner of the escort service that provided Forejt with the male prostitutes. That would be a straightforward explanation how it was possible for anyone to shoot this intimate video.

If true, I am absolutely confident that this guy who masterminded it should return to the prison and the minister of interior, Pilsen-born social democrat Chovanec, is already working on some steps that could have this outcome. It's rather likely that before the video was offered to the media, the guy who managed to record it was blackmailing Mr Forejt, too.

Meanwhile, it was possible for Kroupa to interact with this recidivist and get a justification for the video. The recidivist claims that Forejt was in debt and the debt was supposed to be compensated by the money obtained from the video. The recidivist claimed: "Forejt is owning money for the šit he is doing but I can't tell you any extra details." This sentence sounds sufficiently vague so the "debt" could have been just some unilateral interpretation of some Forejt's activities by the recidivist rather than any legitimate debt based on a mutually agreed contract.

So I think that the #1 priority is to punish those who have obtained such a video illegally, assuming that it was illegally.

The following question is: Should it destroy Mr Forejt's career? I have somewhat mixed feelings on that. Hosting male prostitutes and enjoying drugs at the same moment probably isn't the best experience needed to become the ambassador to the Vatican. (Zeman still "believes" that Forejt will become the ambassador to the Holy See. However, I can imagine that someone in Greater Rome could kill the plan.) But just to be sure, none of us knows what Pope Francis is doing in his private rooms when no public is around, either. We pretend to assume that Pope Francis isn't inviting male prostitutes with cocaine to his bedroom mostly because it's polite to make this assumption but we don't really know, do we?

Is this video incompatible with the work of the director of the Prague Castle protocol? I am not so sure. As long as they are legal, and the sexual part seems to be (Forejt's drugs are being investigated by the National Anti-Drug Police Center), hobbies that such a professional does in his leisure time probably shouldn't affect his job as long as he does the job well in the working hours. On the other hand, I do appreciate the attention that the knowledge about Forejt's hobbies could attract from many corners. Well, I would probably try to make him less visible but I would otherwise try to keep him as influential as possible.

This kind of "spying" is revealed at the time when the online registration of payments has been started. (As expected, the prices in the restaurants and hotels jumped overnight, perhaps by more than 10% in average.) Over a hundred of reports of "missing receipts" are being reported to the ministry every day – possibly by people who are jealous or want to revenge for something to someone. 3 million payments are being recorded every day; perhaps 3 tons of extra paper are wasted every day. Snitching and reporting of some people to the authorities is returning to our society. It's hard not to see the qualitative similarity between the treatment of Mr Forejt and the spying communist habits that the finance minister Mr Babiš seems to be reintroducing to the Czech society.
Luboš Motl v 5:25 PM
Share