Ten hours ago, someone asked me who deserved the Milner Breakthrough Prize in Fundamental Physics last night. I couldn't write the answer in time and I don't have a clue who would be the right choice in mathematics (Jean Bourgain of Princeton's Institute won it and I am not sure I have ever heard the name; note that a special 2016 prize previously went to the three founders of LIGO) but my answer for fundamental physics would obviously be Polchinski, Strominger, and Vafa. 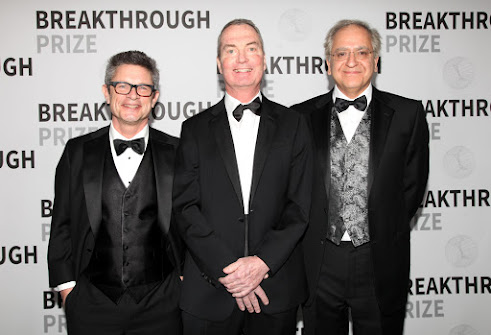 Strominger, Polchinski, and Vafa, 2016. I was actually sent and encouraged to use this picture by the Breakthrough organization. ;-)

This prediction – and this wish – was no rocket science let alone string theory. Already three years ago, these three men were candidates for the prize along with Green and Schwarz who have received the award.


which are nicely chosen words. These words would be right for most of the big shot string theorists but be sure that there are at most a dozen or two whose work would really deserve these words and these three men belong to that top notch group.

The Breakthrough Prize also quotes their "acceptance remarks" in which the researchers summarize their work and explain their reasons why they feel the work is important. Cumrun Vafa also adds an impressive long list of more than 170 of his collaborators. Jonathan Heckman (whom I knew as a brilliant student at Harvard) has co-written incredible 29 papers with Vafa (and usually someone else). Your humble correspondent is in the bottom "also participated" portion of the list.


These are men whom I have been fortunate to know very well, especially Strominger and Vafa, of course. For one of them, the knowledge is profound enough so that I know the approximate percentage added to his banking account as well as his fun behavior at ethanol-enhanced parties. And I have actually met a majority of the 170+ people on Vafa's list, too. Polchinski has interacted with this blog and has been a partial guest blogger etc. and before that, I made some 128 mostly modest corrections to his famous textbook, String Theory. Polchinski, Strominger, and Vafa's names appear in 161, 140, and 181 TRF blog posts, respectively.


This is mainly about their achievements in physics. They have (already) been incredibly productive – having written 180-290 technical papers each – and maintained an unbelievable quality of their work for many decades. Sometimes one needs to be at the right place in the right time. So I do think that some periods of their work have transformed the field much more than others, despite a comparable amount of efforts during the different period.

Although they have made numerous precious insights in earlier and later moments, and dozens of those are discussed somewhere on this blog as well, and all of them are still very active now, I think that it's right to say that the golden era (at least so far) was the mid 1990s, the Second Superstring Revolution, in the case of the three men.

Well, Strominger was a part of a quartet that figured out in 1985 that heterotic strings compactified on Calabi-Yaus yield physics that has all the qualitative features we need to account for gravity as well as the Standard Model. In the same year, 1985, Vafa was a member of a quartet that invented the orbifolds and their assorted properties and implications. Polchinski made important contributions to our understanding of renormalization. But he also found problems with various alternative foundations of quantum mechanics.

I took that picture of Polchinski on a beach near KITP, Santa Barbara.

The mid 1990s were the golden era. Up to 1995 or so, Polchinski and Strominger worked together in Santa Barbara which was (especially along with Rutgers University) one of those "somewhat surprising" yet truly fundamental powerhouses of theoretical physics – before the key people were mostly hijacked by the unsurprising top universities. I've heard lots of stories about the exceptional moments when they were transforming the field of string theory. For example, during the lunches, Polchinski would start to talk about his D-branes while Strominger would talk about \(p\)-branes. It took quite some time to realize that within particular string vacua, they're the same objects. Couldn't they notice immediately that they rhyme and \(p\) rotated by 180° is a \(d\)? ;-)

Joe Polchinski wrote his single most famous paper, Dirichlet branes and Ramond-Ramond charges, in 1995. Open strings in string theory were believed to allow just Neumann boundary conditions. However, he found out – building on his sketched insights from the late 1980s, partly done independently by others such as Petr Hořava at that time – that the Dirichlet boundary conditions were consistent, too. These two boundary conditions were related by T-duality and the open string with mixed conditions indicates one that ends on a dynamical object of any dimensionality, a Dirichlet brane or D-brane. And this object also carries a charge – or a charge density – sourcing the \(p\)-form fields from the Ramond-Ramond sector of closed strings. You really need the D-branes to have any sources for these generalizations of the electromagnetic field; all fundamental strings unavoidably carry zero charge under these \(p\)-form fields.

Polchinski did much more than that – and yes, already the previous paragraph was worth millions of dollars. He developed a precise systematic framework to perturbatively calculate stringy processes that include D-branes in the background. Open strings attached to stacks of D-branes give you \(U(N)\) or \(SO(N)\) or \(USp(2N)\) gauge groups and Yang-Mills or matrix-valued degrees of freedom. These seemingly technical effective theories associated with these newly discovered objects, D-branes (which were always a part of string theory, just not appreciated), have been crucial in numerous breakthroughs that followed: computations of the black hole entropy in string theory, dualities, Matrix theory, AdS/CFT, and others. 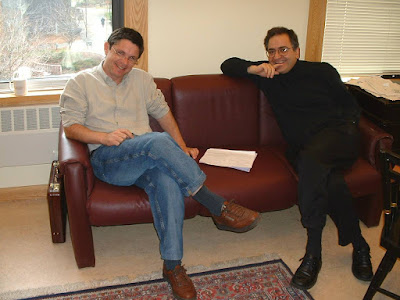 Just a bit later in 1995, Strominger of Santa Barbara was already cooperating with Cumrun Vafa. They found a black hole in a stringy vacuum with 4+1 large dimensions that carried 3 types of charges. They could perfectly calculate the number of the microstates, determine the (hyper)area of the event horizon (mostly Strominger's work), and show that they match. The reason why this Strominger-Vafa black hole was needed is a bit technical. You need at least 3 different types of charges for the horizon (hyper)area to be macroscopic. But 3 is still a low enough number so that the black hole is BPS i.e. leaves some supercharges unbroken. And those allow you to identify the microstates of D-branes with strings attached to them – a description of these states at \(g_{s}\ll 1\) – and microstates of a true black hole curving the spacetime – the description of the same, adiabatically connected microstates at \(g_s\gg 1\).

The Bekenstein-Hawking value of the entropy, \(S=A/4G\), worked perfectly. For the first time, this value was derived from the counting of particular microstates in a well-defined ensemble resulting from a consistent theory. Experts immediately saw it was a breakthrough. One of the results is that Strominger made a "victory tour" over the U.S. to pick a better job and he landed at Harvard – where Vafa had already worked before that.

Cumrun Vafa collaborated with Strominger when the microstates were counted in string theory but he made a lot of deep discoveries himself. One of the explanations of the term M-theory is "mother". Vafa realized that to have babies, one often needs a father as well, so he coined F-theory. ;-) Just kidding, that's not quite the complete way to discover F-theory. F-theory is formally a theory in 12 spacetime dimensions but 2 of those must be instantly compactified on an infinitesimal torus. The remaining 10-dimensional spacetime harbors dynamics identical to type IIB string theory but the geometrization of the "extra two dimensions" allows you to construct new vacua with spacetime-dependent dilaton-axion which may be given a 12-dimensional geometric interpretation.

M-theory – due to Witten – is the strong coupling limit of type IIA string theory and lives in 11 spacetime dimensions. F-theory – due to Vafa – is a geometric description of more general vacua of type IIB string theory so these vacua have either 10 or 12 dimensions (the average of these numbers is 11), depending on your treatment of the infinitesimal dimensions. Although the two situations are completely asymmetric, M- and F-theory have analogously fundamental relationships to type IIA and IIB string theory, respectively.

While M-theory was a completely new limit of the "full" theory - the only limit that had no 1D strings in them – F-theory was slightly old but allowed the people to find completely new types of vacua. In particular, the largest ensembles of compactifications that are often abused for the anthropic principle depend on F-theory and therefore Vafa's insights.

The men have done lots of other crucial work, mostly correct and sometimes at least "controversial": BCOV, Ooguri-Vafa, Joe's and Bousso's discretuum, Cumrun's swampland, Andy's dS/CFT, S-branes, Joe's firewalls, Cumrun's new theories of the Hall effect. Their topics of interests heavily overlap (and always overlapped), lots of examples of AdS/CFT, and hundreds of others. But if one were identifying their location in the space of ideas by fields outside string theory, I think it's right to say that Joe Polchinski would also be the "foundational guy in quantum field theory, renormalization, and even foundations of quantum mechanics", Andy Strominger would be the "general relativist, including the classical GR calculations in cosmology and astrophysics" while Cumrun Vafa would be the "mathematician and a top expert in topological string/field theories", a topic I haven't mentioned so far.

I suppose that the winners were chosen mostly by the previous winners. This is a setup that has its risks but I think that the empirical evidence indicates that it leads to better picks than the arrangements based on less glorious judges.

At any rate, congratulations and good luck to the coming revolutions.
Luboš Motl v 8:43 AM
Share