Addition December 14th: the recorded video of the lecture is finally available.

Update: Some meaningful information overlapping with Ting's talk may be found in this AMS02 press release, Symmetry Magazine, and Astroblogs.NL.


The text below was originally posted on the evening of December 8th.

We're drowning in "fake news" stories about ("fake news" but also about) dark matter. Erik Verlinde has surely unified dark matter and dark energy in his own version of my holographic MOND. A would-be NASA rocket scientist suggests that his reactionless EM drive might give us flying cars that may also go to other galaxies. Some of his fans suggest that this invention of the millennium (which can exert a piconewton because a piconewton is the error of their measurement) is driven by dark matter.

Well, while all the journalists are obsessed with assorted cranks and speculative physicists and their musings about dark matter, The Reference Frame is the only website in the world that seems to care what a $1.5 billion experiment designed to detect dark matter says about dark matter. Who could possibly care about a $1.5 billion experiment if we have a genius building intergalactic spaceships by reflecting microwaves inside a plunger? And as we will see, the AMS results are much further from "null results" than the results of underground experiments as well as the searches for dark matter at the LHC.

As I mentioned at the top of the previous blog post, Bill Zajc, your humble correspondent, and others watched a CERN colloquium today (17:00-18:00 Prague Winter Time) where Nobel laureate Sam Ting promised to report some unexpected results of the 5-year run of the Alpha Magnetic Spectrometer, a gadget working on board of the International Space Station.

See some previous TRF blog posts about the AMS experiment.


Sadly, approximately 25 minutes after the talk began, the video started to get jammed and became unusable for all of us. Well, maybe CERN only sabotaged the watching experience of TRF bloggers and readers such as Bill Zajc. But if that's so, André David and Robert Garisto of PRL are TRF readers, too. ;-) And AMS-02 admitted that the webcast was down on Twitter. You may see a few slides on that Twitter account.


I believe that the recent talks about LIGO were left to YouTube and the experience was flawless, despite the huge number of viewers. CERN should switch to YouTube as the provider of the live videos. When they need both "camera" and "slides" windows, they should run two YouTube streams. The CERN websites may be reduced to a simple HTML code that embeds the two YouTube windows.

Just a proposal. To be fair, I must admit that the CERN broadcast works fine right now again. If you enjoy looking at the empty CERN hall, this is your beloved movie for tonight. 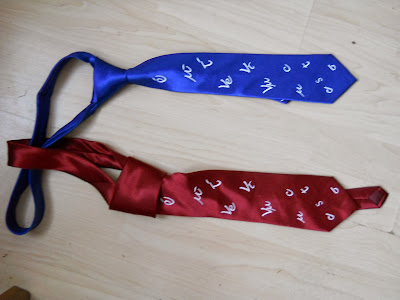 These ties actually contain not just the leptons and quarks but all the elementary fermions that are likely to exist and be very important for phenomenology – including \(\chi\), the neutralino or the particle of dark matter, that is written on the thin "tail". I hope that my friend won't be too sad or angry that I only have the blue tie left. The red one went to ex-president Klaus during his 75th birthday party. Klaus also got a tie from another man but that man is a homeless loser so the tie didn't contain a single fermion. His name is Donald Trump.

At any rate, the shortened talk – we hope to see the full talk soon – was enough to observe Ting as he talks about ambitious conclusions. Recall that AMS measures the electron, positron, and antiproton flux. It has previously observed that the number of positrons did grow with energy and the growth did seem to stop at some hundreds of gigaelectronvolts.

The newest data presented today went a bit further. You could actually see that the positron flux seems to be dropping, as predicted from the dark matter pair annihilation of two neutralinos or other WIMPs, \[

\] etc. The charts are fully compatible with the dark matter theory where the WIMP mass is approximately\[

\] This is a bit heavier than AMS claimed previously. An older blog post talked about the mass \(350\GeV\). Nevertheless, a teraelectronvolt-mass lightest supersymmetric particle would be a great witch to be hunted by the LHC, too.

Alternative, less spectacular, theories explaining the partial data about the fluxes exist. For example, it could be due to pulsars. But pulsars don't explain all the charts – they seem to disagree with the graph for antiprotons. And I apologize if the previous sentence should have said "protons" instead.

Also, Ting said that the assumption believed for decades – that a single power law is enough to explain the flux of antiprotons (or protons) – seems wrong. The flux seems to decrease with the energy according to a power law but at some moment, the decrease dramatically slows down and there's a plateau – or another power law takes over, if you wish.

Many more things should get settled by the AMS by 2024, Ting promised at various points.

So CERN's technical glitches have made the talk incomplete to us. But I am afraid that we could think that the interpretation is inconclusive even if we have seen the whole talk. On the other hand, I think it's right to say that AMS is currently the most prominent experiment that actually seems to strengthen the case for the conventional WIMP (and possibly supersymmetric) theory of dark matter.

Check Jester's update on WIMPs from September 2016 to see that the underground experiments have excluded quite a lot of possibilities – while the possibilities on the lower side (very weak WIMP-nucleon interactions) are excluded by some astrophysical or cosmological arguments. In particular, if the WIMP mass is \(1\TeV\), the nucleon-WIMP cross section should be between \(0.03\) and \(1.3\) zeptobarn. (Zepto- is linguistically related to septima, seven, so it's one-thousandth to the seventh power. So a zeptobarn is \(10^{-21}\) barn or \(10^{-9}\) picobarn.) Only the thickness of half an order of magnitude is left viable for the cross section.

But that doesn't necessarily mean that WIMP is very unlikely now. It may just mean that physicists have narrowed the choices – just like when they knew that the Higgs was between \(115\GeV\) and \(140\GeV\). At that moment, the \(125\GeV\) Higgs discovery was a year or two away. Is the terrestrial discovery of the WIMP particle equally close – or closer?
Luboš Motl v 4:04 PM
Share