A chance for a special relationship to the U.S. is surely a currency in Czechia

The Associated Press and the Czech media have told us about a telephone call between the Czech president Miloš Zeman and the U.S. President-Elect. Trump has appreciated that Zeman was the only EU head of state who publicly endorsed Trump before the elections. Sorry, if I have found a more handsome Trump-Zeman interpolation, I would have posted it instead of this ugly one. :-)

They accepted the invitations to the White House and the Prague Castle, respectively. Zeman's trip to the White House is likely to take place at the end of April 2017 when Zeman is supposed to accept an award from a pro-Israel group, the same one that Trump won in 2016. The White House staff should be ready. Shortly after 9/11, Zeman visited the White House and he forced a militant anti-smoker George W. Bush to allow him smoke in the non-smoking places, by mentioning that both men were fellow Texans (an honorary one in Zeman's case) who must help each other. Up to 2001, that was one of the greatest achievements of Zeman's foreign policies.


Both Zeman and Trump have made their anti-Islamist stances unequivocal, attracting similar criticisms from the politically correct media. Zeman is sometimes referred to as "our Trump" but one could argue that Trump as the "American Zeman" could be a more accurate label.


Another overlap is Trump's Czech-born first wife, Ivana Trump. She's been actively helping Donald in the 2016 campaign, too. After he won, Ivana Trump declared her desire to replace Andrew Schapiro, a former classmate of Obama's, as the U.S. ambassador to Czechia. Zeman has talked to Ivana Trump and supported the plan. Ivana's ex-husband hasn't discussed this idea yet.

Donald Trump has only been to Czechia once. In 1990, he attended the funeral of Ivana's father in Zlín (the place where shoemaker Baťa started; the town was formerly called Gottwaldov, renamed after the Czechoslovak counterpart of Stalin who also died in 1953), Moravia. The funeral was the moment when the divorcing spouses' battle over the money turned into a ceasefire. Ivana-Donald's kids have been going to Zlín almost every year.

(BTW the Czech media have revealed some interesting information about the spying of Donald and Ivana Trump by the Czechoslovak communist secret police, StB. StB – a rogue organization that included the present finance minister Babiš as a collaborator – knew that Trump was getting visible even in Europe, and that's why even his "skillful" wife had to be tracked. See also The Daily Mail on StB and Trump.)

After the two terms of Obama who didn't give a damn about Europe or anything in it, as even the Guardian realizes, you may see the genuine excitement that the potential for some special relationships with the U.S. creates among a significant portion of the Czech political junkies. The Internet discussions are full of jokes and funny scenarios. 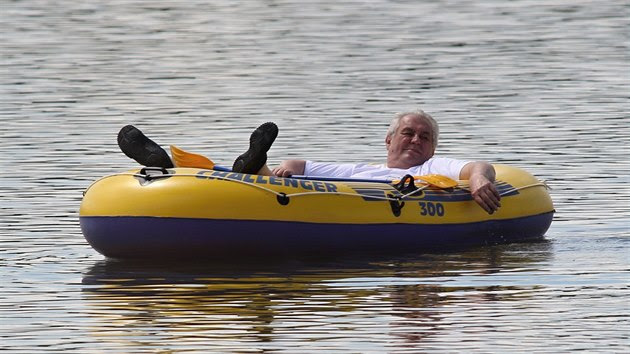 Maybe, Zeman was high or drunk when he thought that he was talking to Trump. Or: Zeman is going to invite Trump to his inflated boat. Or: I also endorsed Trump before the elections but I got no invitation to the White House. Or people ask: How will the anti-Zeman media describe these events? Or: the Prague Café is braying hysterically because Zeman is a friend with all the great powers, Russia, China, and the U.S. That's quite a president.

The U.S. elections and their unsurprising consequences affect the internal political disputes in a medium country like mine. In particular, a month ago, our nation was living with the bogus "civil war" concerning the visit of the Dalai Lama and the apparent loyalty of some people to the Dalai Lama and others (including Zeman) to the Chinese communist leaders.

Just like Hillary's establishment has portrayed Trump almost as a Russian agent, Zeman was often portrayed by Hillary's Czech counterparts (basically the Prague Café) as a guy who is leading us to the East – towards Russia and recently also China. Needless to say, this widespread accusation is pretty much idiotic. But you can see how quickly such a cliché may become ludicrous when Zeman has a chance to develop pretty special relationships with the West's only superpower.

There are differences, however. Trump has called some leader of Taiwan. So some people are also joking that Trump's visit to the Prague Castle will be canceled as soon as Zeman learns about that call. ;-) But I think that it's clear that everyone who says such a thing realizes that it is a joke – and it won't happen because Zeman isn't a Chinese agent just like Trump isn't a Russian one.

Aside from Czechia, the Libertarian Paradise Land of Liberland hopes to build close ties with the Trump White House, too. ;-)

Czechia is one of the textbook NATO countries that only pay 1% – well, 1.05% – of the GDP for defense, well below 2% favored by Trump (but also many U.S. folks before him). The current Czech defense minister says that the spending could reach 2% by 2025. I am sure it could be done more quickly. And maybe it should. But one should understand that one reason for our smaller defense spending is that we are a landlocked country within the Western civilization. It simply makes lots of types of attacks much less likely than in other regions. We're much more likely to enter tense but verbal arguments about various non-lethal issues (Islamic immigration, nuclear power, other things) with our NATO allies. And it's simply not expected that those would lead to a war. And wars with non-NATO countries are unlikely to get to Czechia too quickly.

So even though Czechia is a sort of a military production power (BTW the production of L 159, the airplanes that have helped the Iraqi Air Force in recent months, is gonna resume soon) and has some good special units etc., it makes sense for us to be relative military dwarfs. The same-size-fits-all isn't necessarily a sensible policy towards the NATO countries' defense spending. On the other hand, it could be fair for Trump or other NATO allies to demand that we increase the budget exactly for us to be able to contribute to faraway wars.
Luboš Motl v 6:44 AM
Share