A monstrously symmetric cousin of our heterotic Universe


Well, this paper elaborates upon their previous PPV1 paper which is exactly 1 year old now but I am sure that you will forgive me a 1-year delay in the reporting.

It's just remarkable that something so mathematically exceptional – by its symmetries – may be considered "another solution" to the same spacetime equations that also admit our Universe as a solution.

I still consider the \(E_8\times E_8\) heterotic string to be the most well-motivated candidate description of Nature including quantum gravity. Dualities probably admit other descriptions as well – F-theory, M-theory, braneworlds – but the heterotic string may be the "closest one" or the "most weakly coupled" among all the descriptions.

Because the critical dimensions don't agree, the remaining \(D_L-D_R=26-10=16\) left-moving dimensions have to be compactified on the torus deduced from an even self-dual lattice (or fermionized to 32 fermions whose boundary conditions must be modular invariant). There are two even self-dual lattices in 16 dimensions and we obtain theories with spacetime gauge groups \(SO(32)\) or \(E_8\times E_8\). Both of them have rank \(16\) and dimension \(496\).


Six of the remaining 9+1 dimensions of the \(E_8\times E_8\) heterotic string may be compactified on something like a Calabi-Yau manifold which breaks the \(\NNN=4\) spacetime supersymmetry of the heterotic string to a realistic \(\NNN=1\), allows one to break \(E_8\times E_8\) to a grand unified group such as \(E_6\) or \(SO(10)\), and we may end up with at least semi-realistic (all qualitative things up to some level surely agree) effective field theory at low energies.


Natalie and co-authors are de facto doing "something equally good" as far as the validity and consistency of the heterotic compactification is concerned. The outcome is more interesting mathematically and less relevant physically, however. They're just compactifying the \(26\) left-moving and \(10\) right-moving dimensions of the heterotic string differently than in the most realistic vacua. Well, for the bosonic (left-moving) side and the fermionic/superstring (right-moving) part they choose the following world sheet conformal field theories:
It's absolutely wonderful. The first, left-moving side basically compactifies \(24\) bosons on the torus obtained from the 24-dimensional Leech lattice. It's another even self-dual lattice but in dimension \(24\) – the only one in that dimension that contains no sites whose squared length is equal to two. The shortest nonzero vectors have the squared length equal to four – which is why no continuous Lie symmetry (such as those from the lattices \(\Gamma_{16}\) and \(\Gamma_8\oplus\Gamma_8\)) arises.

That CFT was known to explain the monstrous moonshine – the appearance of the number \(196,883.5\pm 0.5\) both in \(j\)-invariants as well as in representations of the monster group. The monster group has \(8\times 10^{53}\) elements or so. It's important to realize that not all the discrete transformations in the monster group are represented as geometric actions on the Leech lattice. Some of them act in more stringy ways – just like when string theory on the self-dual circle is capable of enhancing the \(U(1)\times U(1)\) gauge "Kaluza-Klein plus B-field \(p\)-form gauge invariance" symmetry to an \(SU(2)\times SU(2)\).

If you only look at the geometric symmetries of the Leech lattice, you really search for the group of automorphisms of the Leech lattice. This group is known as the Conway group \({\rm Co}_0\) and its number of elements is much smaller than that of the monster group, just \(8\times 10^{18}\) or so. It's the largest one among the so-called Conway groups. However, it's other three groups \({\rm Co}_1,{\rm Co}_2,{\rm Co}_3\) that belong among the 26 or 27 "sporadic simple groups" in the classification of the finite groups.

Aside from the monster group and the three sporadic Conway groups, the remaining 22 full-blown sporadic groups are the baby monster, five Mathieu groups, four Janko groups, three Fischer groups, Higman-Sims, McLaughlin, Held, Rudvalis, Suzuki, O'Nan, Harada-Norton, Lyons, and Thompson group, while Tits group is sometimes counted as the 27th sporadic group. Mathematics is weird – these groups look almost as arbitrary as the names and nationalities of their human namesakes but they are objective facts about mathematics that every mathematically literate E.T. civilization agrees with.

OK, the funny construction behind this paper combines the \(c_L=24\) bosons on the Leech lattice, along with a \(c_R=12\) conformal field theory for the supersymmetric side whose symmetry is the Conway group. These two ingredients may be combined to produce a consistent two-dimensional, modular-invariant, conformal field theory coupled to gravity – also known as a perturbative string theory.

(The supersymmetric, right-moving, Conway side has a smaller group and plays a correspondingly smaller role in the hybrid construction, the role of a "passive spectator". The usage of a subgroup for the fermionic side seems reminiscent of the fact that the 32 fermionic supercharges in string theory only transform under a compact subgroup \(Spin(16)\) of \(E_{8(8)}\) or similar groups: the "bulk" of the exceptional generators of the U-duality group isn't manifest even though the states constructed with the help of the fermions ultimately transform under the whole exceptional U-duality group.)

Natalie et al. study their model in quite some detail. They verify some special property of the CFT that is seen on the sphere – and that involves some elements in \(SL(2,\RR)\) outside the modular group \(SL(2,\ZZ)\). They also look at all the BPS states in the second-quantized string theory – those would be actual BPS states in the spacetime that is a sibling of the spacetime around us. And they find out that these BPS states form a representation of a sort of some true new "staggeringly stinky animal", Borcherds's and Carnahan's "generalized Kač-Moody algebras \(\mathfrak{m}_g\)". (Carnahan added some "twisted" cousins of the original construction by Borcherds.)

I had to use a new phrase, "staggeringly stinky animal", because all simpler phrases such as monsters and beasts had already been reserved by other important mathematical structures in this enterprise. :-) It is not hard to see that these generalized Kač-Moody algebras are a "sweet bastard hybrid" of the ordinary Kač-Moody algebras based on continuous groups and the discrete monster group.

Much of the paper is written in a physicist-friendly language but at the end, they switch to the language of axiomatic vertex operator algebras, a jargon of mathematicians designed so that you wouldn't even necessarily recognize that they're studying a perturbative string theory.

A twelve-minute talk – given on the day when LIGO announced the waves – by then graduate student (!, she already has 10+1 papers; soon-to-be a Burke fellow at Caltech) Natalie Paquette about the "unreasonable effectiveness of physics in mathematics", a thought-provoking reversal of a well-known Wigner's title. After a brief introduction to Wigner, string theory, and compactification, she gives her edition of the story how string physicists have hilariously trumped mathematicians in the counting of the spheres within the quintic hypersurface. (Most people in Palo Alto will surely try hard to cleverly permute my "hilariously trumped" and experiment with phrases such as "trumpishly hillarized", but I predict that at the end, spellcheckers will confirm that they will have lost this battle just like Hillary has.)

It's sort of metaphysically thrilling to realize that these almost maximally, sporadically, staggeringly symmetric constructions are siblings of the heterotic compactification that may be responsible for the world we inhabit. Because of the relationship of these siblings, I think that we should appreciate that in some very early epoch of cosmology, the Universe was deciding whether it wanted to live in the Monster \(\times\) Conway heterotic hybrid described in this paper; or in one of the relatively boring Calabi-Yau-like compactifications that generates the particle physics we know. 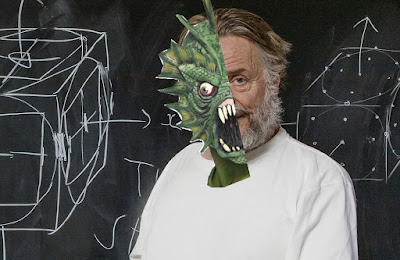 The Monster \(\times\) Conway heterotic VOA hybrid is smart and beautiful, not to mention imaginary.

We may even suggest that our Universe has spent some Planckian time in the Monster \(\times\) Conway hybrid before the monstrous and generalized Kač-Moody symmetries were broken, to yield the world that we know, love, and are sometimes annoyed by. In quantum field theory, we may only imagine our world as a broken phase of grand unified theories with groups like \(E_6\) which are large but not "really" qualitatively different from the Standard Model group. On the other hand, string theory allows us to conjecture that our world is also a broken phase of a theory that had huge symmetries such as the monster group to start with.

The process of the breaking of this monster group symmetry is very different from the Higgs mechanism in quantum field theory when it comes to the technical details but these mechanisms may be fundamentally equally relevant and important.
Luboš Motl v 9:09 PM
Share