Ten months ago, I mentioned that our Slovak brothers – with the unmatched support from the Slovak government – decided to seriously work on plans to build Hyperloop between Bratislava, the Slovak capital, and nearby cities like Budapest and Vienna. 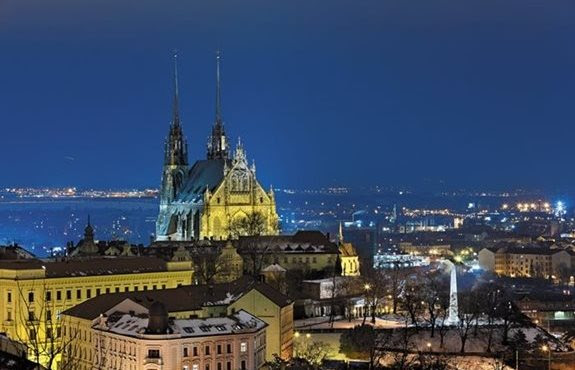 Brno [pronounce: burn-naw] is well-known for the Masaryk racing circuit/automotodrom, some industrial exhibitions, Brno's giant penis statues (it's actually Jobst of Moravia and Luxembourg on a female horse), as the golden ship filled with pretty girls (orig.), crooked spire on their city hall saying something about the justice over there, the Špilberk castle with a prison, functionalist villa Tugendhat, and as the place where Gregor Mendel discovered the laws of genetics, among other things

Today, Czech media and Wired (and other English-language outlets)


Slovakia's Hyperloop moves a step closer to not being a joke


told us that my homeland has finally joined this experimental movement. Brno (DE: Brünn), the modern capital of Moravia (an ex-margraviate formally outside the Czech/Bohemian kingdom) and Czechia's second largest city (400,000 people and twice as much in the broader area), signed a declaration with HTT vowing to work on Hyperloop.

They would like to connect Brno with Prague – the Czech capital hasn't signed anything (and the Czech government finds Hyperloop too experimental) – but as far as the city halls' OK goes, you could at least connect Brno and Bratislava which are 70 miles away. That's not terribly helpful because it only takes some 80 minutes by car to go from one city to the other.


Except for some modest $200,000, the signature doesn't imply too big expenses for Brno but it's extremely likely that dozens and maybe hundreds of engineers and scholars in the city will slightly think about it. Some guys from the local MIT, the "VUT", sound rather skeptical about the speedy plans, however.

Famously enough, a "streetcar" [CZ: "tramvaj"] is known as as a "šalina" in the Brno dialect of Czech – a bastardization of German "elektrische Linie" – so I suppose that the Brno Hyperloop will be referred to as a Hyperšalina.


Unlike Thunderfoot at YouTube, I think that the Hyperloop technology is totally possible. After all, it looks like a scaled up version of the pneumatic tubes that have been used and are still being used in Czechia, mainly to quickly transmit snail mail by the Post Office.

In total, Prague has had 60 kilometers of the tubes to do so! Much slower but in principle still "similar" tubes are being used to transmit test tubes and similar stuff between all the buildings of the university hospital in my hometown of Pilsen and there are many applications. Prague's being between the world's top cities using the pneumatic tubes may be viewed as a reason to brag – but it was also a sign of the Czechoslovak technological lag because "more abstract" technologies began to intensely replace snail mail some 40 years ago but Czechs were still extending their 19th century paradigms.

HTT's own video about the Brno plans. Thanks to the Velvet Divorce, the innocent connection between two nearby Czechoslovak cities may be sold as the "first international Hyperloop agreement" LOL

Hyperloop and Elon Musk may sound very futuristic but the pneumatic tubes should really sound historical to you. ;-) This page assures you that the technology was really hot some 150 years ago.

Some Czech sources, e.g. Czech Public Radio, claim that one kilometer of Hyperloop should only cost $1.2 million per kilometer. If this price were real, I am absolutely sure that it would be a wonderful technology and at least four Czech cities should join the network. In particular, I am convinced that with that price, there should be a Hyperlink connection between Brno and Pilsen, too (250 km by air, 300 km by car – the roads are far from straight). I am already planning the train station in Pilsen. :-)

$300 million for a superfast Brno-Pilsen link sounds very cheap to me. I do believe that thousands of Brno-Prague or even Brno-Pilsen Hyperloop passengers a day could create the profit of a few million crowns a day and the construction could be repaid in a decade. I am sure that the users would include some current wealthier train/bus passengers but also many people who are commuting with their cars but they could simply find Hyperloop much better – especially because it's much faster.