Two Czech pro-Kurdish warriors against ISIS were caught by the pro-ISIS Turkish government and most TRF readers believe that they're doomed. But it doesn't always have to be like that. Even seemingly tougher situations may be resolved. Hours ago, we've heard about such a great example. 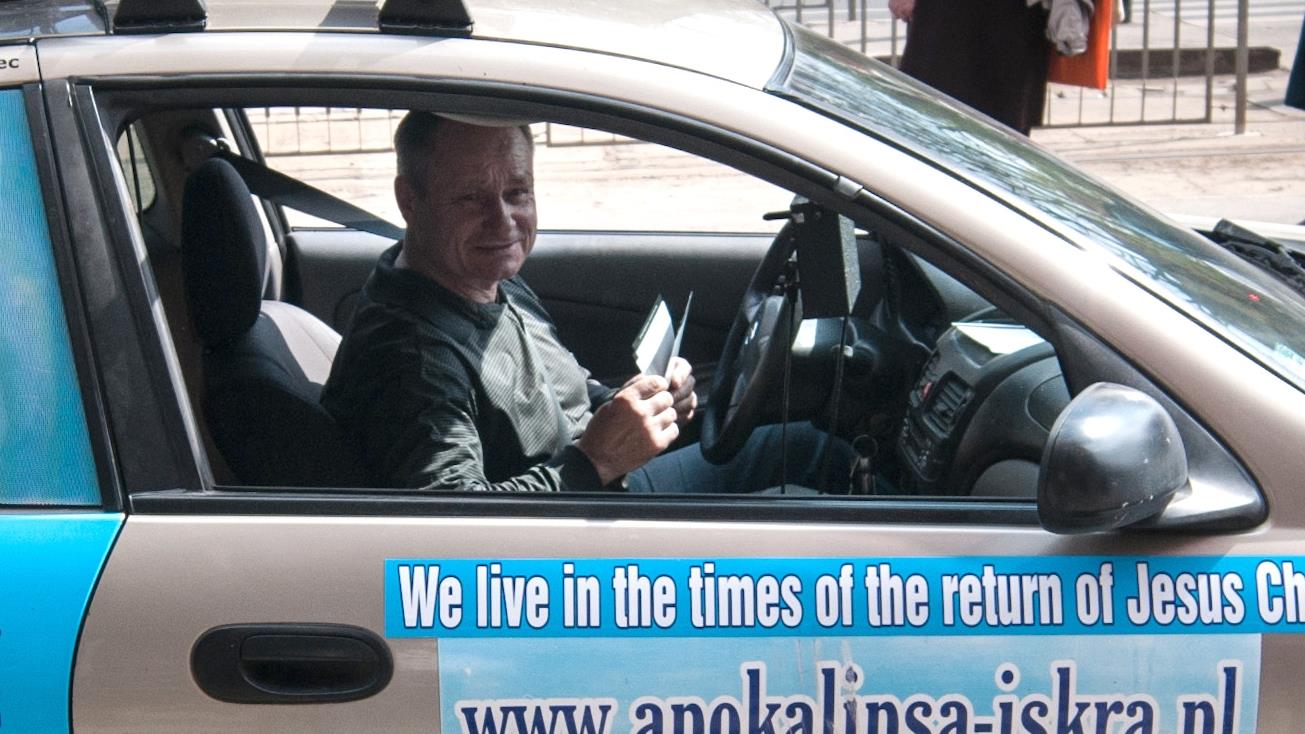 Leszek Marian Panek (54) has been a well-known character in Poland, especially in Wroclav. He believes that the return of Jesus Christ is imminent and will be accompanied by a nuclear war. His golden Nissan recommends Jesus Christ as the new king of Poland, among other things. God told him to sleep in that car and distribute tens of thousands of flyers. American and other readers surely know similar characters.


At the end of 2015, he came to Syria to achieve a goal that all of us agree to be decent: to convert them from Islam to Christianity, to replace the pedophile and mass killer in their hearts by the nice character of Jesus Christ. The holy spirit has showed him that Daesh is an incarnation of the Biblical Antichrist which you may also agree with even though you would use slightly different words. ;-) Some security forces ordered him to show his ID and when he was drawing his ID from his pocket, they thought he was drawing a gun, they shot him in his leg (therefore the crutches at the picture below), and arrested him. He was waiting for his death penalty.


His Polish friends didn't like it and contacted a natural ally, the only EU member state and the only NATO member state that has an embassy in Damascus, namely Czechia. Mr Hynek Kmoníček, the top foreign affairs guy at the Prague Castle, the ex-ambassador in India, Australia, and the U.N., and the future ambassador to the U.S., became the somewhat unsurprising recipient of this request.

And to the Czech ears like Kmoníček's, the arrest of Mr Panek simply sounds even fishier. This deeply believing guy hasn't done anything wrong. Like an idealist, he just came to a troubled country to replace Allah and Mohammed with some superior models. After all, shouldn't they be immensely grateful and pay him millions of dollars for that? Everyone who finds religious freedom at least slightly important agrees that this can't be a reason to execute him.

Syria is troubled – in theory, it should be more troubled than Turkey – and there are lots of forces over there.

Do the people around President Bashar Assad agree with us that Panek hasn't done anything he could be arrested for in a decent country? Well, it turns out that the answer is Yes, they agree. After some negotiations both in Prague and Damascus, Mr Leszek Panek was transferred to the Czech and then Polish embassy in Lebanon i.e. freed. He seems to be in a satisfactory physical and an appropriate mental condition, at least if you subtract all possible doubts you may have about his thoughts' resembling those of Baba Vanga.

Not a penny has been paid.

The official justification for the pardon are "humanitarian reasons". Panek seems to be at the bottom physically and psychologically to Kmoníček. Well, maybe this explanation must have been said but if Kmoníček threw away the suit and the bow tie, he and Panek could look like twin brothers. ;-)

There are numerous cynical if not downright evil Czech commenters who shout that the Czech diplomats shouldn't have done this work for a nutcase like that. I just can't agree. He's a human being and his heart seems to be full of love. The Western civilization has some values and should nurture them and the religious freedom and/or care for the individual people in trouble belong to this list. Diplomats don't have too much work and it's natural that they should dedicate some energy to similar efforts.

I am proud of Mr Kmoníček's (and two Czech female ambassadors') work. Needless to say, it wasn't terribly unexpected that the Czech diplomats would be the key given the fact that they're the only full-blown Western diplomats in Damascus. (The embassy is doing some things for Americans, too.) Kmoníček explains that the Poles are members of our broader family so it's obvious that we serve them for free. And Syria has just done the same for us. Isn't it how things should work?

Sadly, Czechia doesn't have similarly good and effective friends with enough influence over Ankara which is why our two anti-ISIS warriors haven't been freed (yet).

It's very possible to talk to folks like Assad and it's right to talk to people like Assad. I guess that it would be easier for me to communicate with him than with many people in the West etc. Czechia hasn't stopped talking to Syria and that's why it could play a similar role that would probably be played by France a few decades ago.

An alternative attitude is that the West should respect – if not encourage – the Islamic bigotry in the region. And indeed, the Obama administration has done a lot for this kind of policies (but wasn't the first one). I am sorry but this view is absolutely wrong and I hope that it's been moved to the dustbin of history along with the Obama administration last Friday. Islamic bigots who can't be reasonably talked to aren't the only people in countries like Syria, as this incident shows. There are also other people – more similar to ourselves – and if we have respect towards someone in the region, we should have respect to them, too.

I don't want to say that it's right to invest trillions of dollars into wars and interventions. But this negotiation has showed how much good may be done for free and without violence. If there are people who agree that e.g. the Polish Christian should be freed, they should be given the opportunity to do it. Once it was done, these people compatible with the West, the Western values, and peaceful relationships in the world have gotten stronger. And such an outcome is very good, I think.
Luboš Motl v 2:32 PM
Share