Spitzer finds a more habitable extra-solar system than ours

I would still bet it's uninhabited

An hour ago, I bought an amazing astronomical telescope for $4. It's a pretty good price, I think, but when it was new, it was actually sold for the same price in the supermarkets! ;-) It's meant to be a gift for an 8-year-old but I've never had such a big telescope in my life and it really works. Sadly, the sky is cloudy now.

Many of us were eagerly expecting the press conference on NASA TV at 7 p.m. Prague Winter Time (see also the NASA exoplanets web). I am watching it now.


Now we know what happened: the Spitzer telescope has found the most hospitable exoplanets so far. Orbiting around an ultracool dwarf star TRAPPIST-1 some 39 light years away, there are 7 planets – about the same wealth as our Sun. Some of them were known before today, the remaining ones were added today. But not just one but three of them support liquid water. Not only the environmentalists are lying when they say that there is no Planet B. There exist Planet B1, B2, and B3 (more precisely TRAPPIST-1e, 1f, and 1g), not to mention billions of other planets that surely exist in the visible Universe. ;-)


The scientists showed us that at least one planet is basically a twin sister of our Earth, there is the same amount of "solar" radiation, temperature, and many other things.

It sounds wonderful. By a simple statistical argument, there couldn't ever be any doubts that you could find planets that will have several basic parameters within the "hospitable intervals". Those conditions are simply not that constraining. 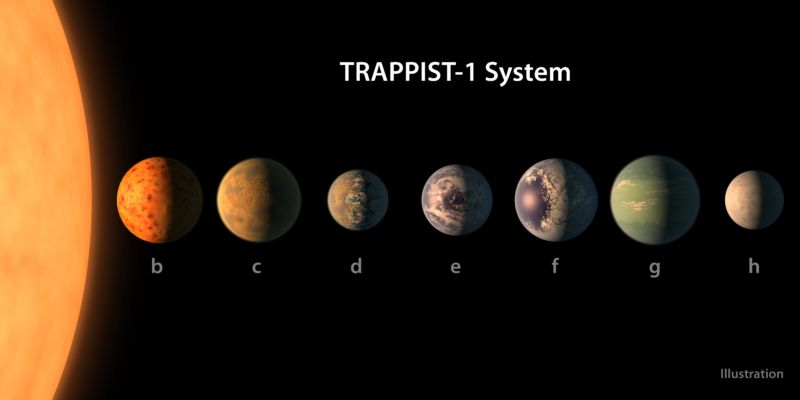 However, for some reason (e.g. because I haven't communicated with an alien yet, except for illegal Mexicans), I still think that there are no intelligent aliens living on these Planets B1, B2, B3. In fact, I would bet that there are not even primitive organisms over there.

As you know, I tend to be a believer in a rare Earth – and in Panspermia. I think that aside from the simple physical conditions for hospitability above, there existed vastly more demanding conditions that were obeyed by Earth and needed for life to emerge. In particular, the environment of the Solar System could have included some pre-existing forms of life that were ideally evolving on the (high-area) surface of cosmic dust, for billions of light years before the Solar System was formed. And the Solar System may still belong to a tiny fraction of the volume of the Universe where these pre-Earth conditions took place.

The availability of liquid water is basically easy but these additional conditions – the existence of DNA-like seeds of life – can reduce the number of candidates more or less by an arbitrarily large factor, perhaps even \(10^{500}\), I think. We could very well be the only planet with intelligent life in the visible Universe.

If someone is willing to claim that intelligent life will be discovered on these TRAPPIST-1 planets, I am ready to take the bet! ;-)

Independently of my conceptual beliefs, there are other "disadvantages" of that star. TRAPPIST-1 is just some 0.5 billion years old – younger than the Sun by a factor of 10. Recall that 500 million years wasn't enough for life to become too advanced in our similar terrestrial conditions. The temperature on the exosun's surface is some 2,500 kelvins, less than one-half of the Sun's surface temperature. The exosun's radius is 11% of the solar one and the mass is 8% of the solar mass.

These planets' year is 2-12 (terrestrial) days long. It must be annoying to file tax returns every 2-12 days but it's possible to survive bureaucracy.

One more comment about the pre-Earth evolution of life. I do think that the conditions for evolution could be far more generous on dust. Imagine that you divide the Earth's mass to small particles of radius 6 micrometers. It's \(10^{12}\) times smaller than the Earth radius so there will be \(10^{36}\) such particles. Their combined surface will be \(10^{12}\) times greater than on Earth. The surface – and the adhesion forces to it – may be enough for unicellular organisms so their number could be up to \(10^{12}\) times greater than what can live on the undivided Earth's surface (without trampling on others). The large amount of this Lebensraum could have been helpful for early life to evolve.