The LHCb detector is way smaller and cheaper than its fat ATLAS and CMS siblings. But it doesn't mean that it can't discover cool things – and many things. The letter \(b\) refers to the bottom quark. It's often said that the bottom quark is the best path towards the research of CP-violation and similar things.

But for some reasons, the LHCb managed to discover five new particles without any bottom quark – at once: 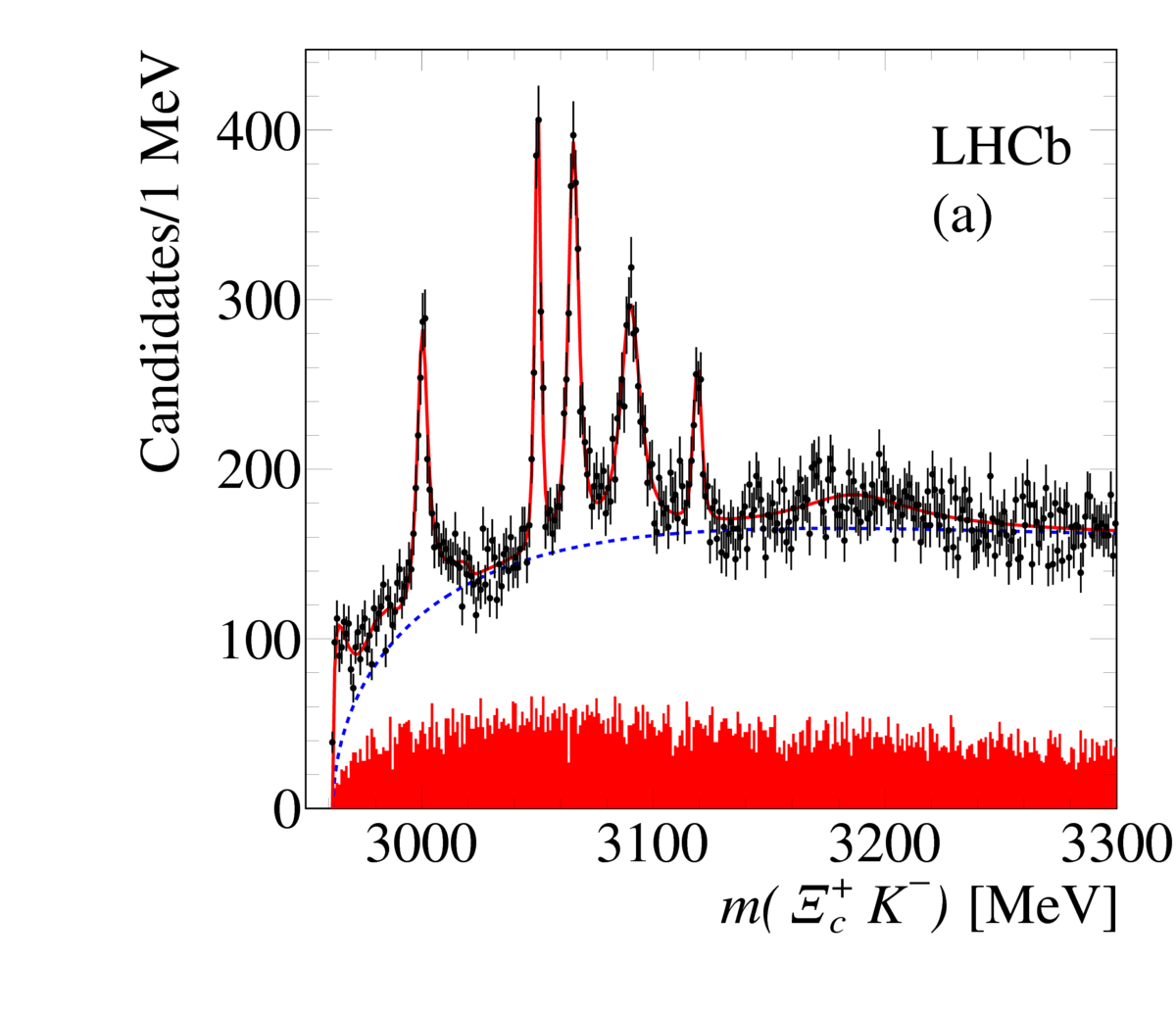 The collaboration proudly tweeted about the new discovery and linked to their new paper,


You may count the new peaks on the graph above. If you haven't forgotten some rather rudimentary number theory, you know that the counting goes as follows: One, two, three, four, five. TRF contains new stuff to learn for everybody, including those who would consider any mathematics exam unconstitutional and inhuman. ;-)


They identify the bound states of the Omega baryon according to the decay products that they can label reliably enough. These new charmed neutral Omega baryons (the quark content is \(css\), like the cascading style sheets) decay to a positive charmed Xi baryon (whose quark content is \(ucs\) or \(ucs\), if you agree that the acronym shouldn't be reserved by a corrupt Union of Concerned Scientists and Anthony Watts' dog) and the negative kaon \(K^-\) (quark content: \(\bar u s\), thanks, Bill).

Well, the positive charmed Xi baryon decays to \(p K^- \pi^+\) and those are really well-known everyday animals for the LHCb scientists.


The new \(css\) bound states are narrow resonances – which means that the decay rate is slow (width is small) enough. You may consider them excited states of the same particle or different particles. Which of those is better is little bit a subjective issue. The excited states of a hydrogen atom are clearly "the same particle" because the transitions between them is the most common one and involves a truly neutral, peaceful photon (which is "almost nothing", especially when it comes to charges).

But these excited states of the \(css\) quarks are strongly interacting and it's rather easy for these beasts to create quark-antiquark pairs, in this case an up-antiup pair, and divide all the quarks differently. These processes are actually more frequent than a simple emission of a photon. So the excited states don't change to each other so automatically and they may be considered distinct entities although they're really built from the same ingredients, just like different excited states of a hydrogen atom.

You can imagine how people had to be thrilled in the 1960s when such new particles were discovered frequently and the innocent physicists actually believed that those were elementary particles. However, in the late 1960s, quarks were proposed, and in the early 1970s, QCD was written down. Before QCD, physicists were willing to believe that they live in a paradise with hundreds of exotic elementary particles species or that these numerous particles were proving that Nature was lifting Herself by Her own bootstraps.

At some moment, physicists devoured the QCD apple and their feeling of mystery and submission faded away. Those are just some additional boring bound states of six quark flavors and their antiquarks, aren't they? Why so much ado? And that's where we are. Lots of the childish excitement is gone, our previous emotions look a bit silly and scientifically naive, and when we want to look for the truly deep signs of Nature's mysteries, we know that we must dig deeper than to discover five new baryons (at once).

Off-topic. Dr Sheldon Cooper, the boy (Iain Armitage, a theater critic), interviewed another Sheldon a year ago. The spin-off of TBBT could be fun.

And if you asked me, I find this whole elaborate scheme with Greek letters labeling the QCD ground states to be an anachronism. I would replace symbols like \(\Omega_c^0\) by \(css\) – note that both require three characters – and perhaps added some extra labels when needed. For example, these five excitations may be labeled \(3000,3050,3066,3090,3119\) which are their masses in the units of \(1\MeV\). With this modernized notation, we could reserve the precious Greek letters for something more mysterious, for something that still sounds Greek to us. And I am not talking about Greek economic and imigration policies which should be represented by characters such as f%&*^*g s#&*t.

But I may be wrong and those baryons may be fundamentally important. And even if they're not, it's important that physicists don't forget the craft that their predecessors were so good at half a century ago. It's like not forgetting how to make and listen to classical music or anything of the sort that suddenly faced lots of competition attempting to steal a big part of the people's attention.
Luboš Motl v 8:35 AM
Share