About two dozens of new ATLAS and CMS papers seem absolutely well-behaved. It's hard to find even a glimpse of an emerging deviation from the Standard Model. A week ago, I mentioned an outstanding B-meson anomaly which is 4.9-sigma strong. 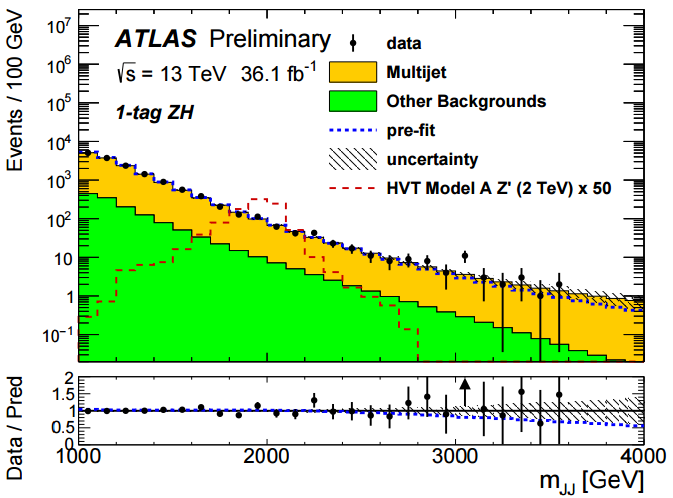 
The local significance is 3.3 sigma, the global significance is quantified as 2.2 sigma. So it's nowhere near a discovery but it's still among the strongest deviations from the Standard Model that you may find in any new LHC paper published in 2017 so far.


As the picture embedded at the top shows, about 3 events were predicted in the interval of masses \(3,000-3,050\GeV\) but 10 events were observed. Not bad. Correct me if you can read the numbers more accurately.

Clearly, if this apparent fluke were a real signal, there could be a new \(Z'\)-boson whose mass would be close to \(3\TeV\). That's amusing especially because in September 2015, CMS announced an electron-positron pair whose invariant mass was \(m\sim 2.9\TeV\) – it was the energy record-breaker at that moment and a higher scorer than what was expected – and that one could have been a new \(Z'\)-boson, too.

I think that the probability is some 98% that this ATLAS excess is a fluke but if you want to be intrigued by some existing – not yet outdated – deviations from the Standard Model, this could be one of your choices.
Luboš Motl v 2:57 PM
Share