Berkeley pop scientist denies the orbital cause of ice ages

Thankfully, the March For Science was a dud. A couple of extremists showed their childish banners such as this one by computer scientist Scott Aaronson. Indeed, the two claims on the banner are as unrelated as two sentences in a typical leftist demagogic rant. Moreover, I think it is strategically misguided for a Jewish scholar to claim that a non-Jewish man "stinks", or vice versa. It can backfire easily because the numbers aren't on your side, Mr Aaronson.

On the same day, "the Earth Day", someone attempted to assassinate climate skeptic John Christy in his office (Roy, WUWT). Seven shots were fired on Lenin's birthday against a climate skeptic who recently testified in the U.S. Congress and who issued an inconvenient press release just days before the shots. While it's rather self-evident that a foe of the "deniers" wanted to turn The Earth Day to a Night of Broken Glass, the local police investigation decided that these seven shots in the same window of the skeptic were just "random shooting, nothing to see here". A gun randomly quantum tunneled, jumped in front of the climate scientists' office, and then the trigger quantum tunneled and shot at the same window of Christy seven times. That's the most likely explanation that the cops were capable of producing.

For years, I have stressed that the climate alarmist groups were dangerous terrorist organizations but I am afraid that lots of people will have to die before the society will realize this obvious point, outlaw them, execute their leaders, and treat them on par with the likes of Al Qaeda.


But I want to discuss a different topic. Quora is sending spam to my mailbox which features answers that could be interesting for me. Most of them end up irritate me immensely. In particular, I am persistently fed a would-be scientist from Berkeley named Richard Muller. It's a guy who tries to moralize about physics even though he clearly misunderstands the very basics of general relativity, the very meaning of the phrase quantum gravity, and lots of other things.


Most recently, he was asked


What is your favorite 'wrong' scientific theory?


and he answered "The Milankovitch Theory" for the glaciation cycles. We learn that people ask him what's his alternative. And he, because he must believe that he is more than just a regular scientist (he is the presidents' physics teacher, isn't he?), gives them a wonderfully profound answer: "Fuçk you." He just knows it's wrong.

And this answer is being sent as a gem to millions of people who have ever visited Quora and it gets upvoted literally by thousands of clueless imbeciles.

Make no mistake about it: To doubt the Milankovitch theory is on par with the claim that the Earth is flat. It proves that the speaker doesn't understand basics of the Earth sciences. Serbian geologist Milutin Milankovitch was arguably the only 20th century climate scientist who deserved a Nobel prize but the climate alarmists are doing everything they can to fight against any genuine science like that. In particular, well-known Wikipedia ideologue and the apparatchik of the U.K. Green Party William Connolley has done a lot to obfuscate the Wikipedia page on the Milankovitch cycles – and hundreds of other pages.

What is this theory about? In recent millions of years, the Earth experienced glaciation cycles. After tens or at most one hundred thousand years, the ice ages (in the short-term sense) were alternating with the (warm) interglacials. The difference between the global temperatures of the warm stages and the cool stages was around 8 °C. Much of Europe was covered by ice at various moments. The temperature graph is nicely extracted from the ice core in Vostok, a lake in the Antarctica. The depth in the ice corresponds to the year in the history (because the layers were being added on top of each other) and the concentration of gases and isotopes in the bubbles may be translated to the temperature and other conditions at that time.

What was the cause of this self-evident variability of the temperatures? If you didn't have the detailed data, you could defend all kinds of theories, hypotheses, and speculations. But we do have the data and within a minute, you may understand the proof that this variability was caused by the orbital irregularities of the Earth. The following picture was taken from a 2010 blog post about the Milankovitch theory and an important clarifying article by Gerard Roe. 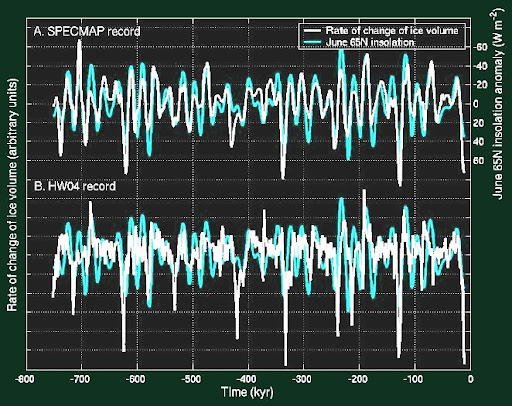 The two parts of the graph above have the same theoretical prediction – the blue curve (well, it's cyan but let's be simple) – but they use different experimental data – the white curve.

And the blue curve is the theoretical prediction – well, it's the retroactively calculated insolation at 65 °N (Arctic circle) in June. That quantity changes because the axial tilt of the Earth changes between 22° and 24° or so, thanks to the effects by other celestial bodies excluding the Sun, with the quasiperiod of 41,000 years; and because the eccentricity of the Earth's orbit (how much the elliptical orbit is "squeezed", i.e. far from a circle) also changes, with the quasiperiod close to 100,000 years.

The key point is that the blue and white curve clearly agree remarkably well. It cannot be a coincidence, as I will remind you, and this fact implies that a very large majority of the temperature variations had to be explained by Milankovitch's orbital variations. The Milankovitch theory's explanation is straightforward:


Other celestial bodies etc. make the Earth's axial tilt and eccentricity vary with time.
These variations change the amount of solar energy landing near the Arctic circle near June.
This place and this season is most important for the growth or decline of ice sheets because the Northern Hermisphere, with its land masses in this area, has the greatest potential to change the ice sheets; and because the amount of radiation in June when it's intense really matters is more important than the amount of radiation in seasons when it's weak, anyway.
This varying insolation decides about the increase or decrease of ice sheets on Earth. And through feedbacks (less ice means more solar radiation is absorbed by Earth, and therefore warmer Earth), the volume of ice sheets determines the temperature in the region and the whole Earth.


Gerard Roe basically had to add a derivative (or integration) symbol to the whole theory. Previous attempts to precisely compare the curves were directly linking the insolation and temperature but that was wrong (no wonder that the curves never seemed to agree precisely and that the "old theory" was predicting too little variability with the longer periods around 100,000 years): the insolation is closer to the time derivative of the global mean temperature – or the global mean temperature behaves like the integrated insolation.

Fine. Let's decide whether the agreement between the curves might be just a coincidence:

You may divide e.g. the upper graph to some 50 equally long intervals of time – each of them will be 15,000 years long. When you do so, the temperature in each of them will be "almost independent" of all others. Now, calculate the white-blue difference for each of these 50 moments. You get some "typical error margin" which would quantify the typical difference between two random curves of the same type but the actual error margin is at least 2 times smaller (and it could be 5 times) at basically every moment among these 50.

\] or \(10^{-15}\) or so. The probability is zero for all practical purposes – and again, you would probably get more extreme exponents if you weren't trying to be as safe as I. So it is impossible that the agreement between the two curves results from chance.

(Muller's "disproof" looks at one of these 50 moments only and decides that the difference between the curves is greater than Muller would expect – and he pretends to believe that it's enough to disprove the theory. It's absolutely ludicrous – the modest disagreement at one place, even if there were one and the curves above show that there is none, might occur by chance but the stunning agreement at all places could not emerge by chance.)

OK, so there must be some causal explanation behind this very strong correlation. The causal relationship must be one of the following (or some "soft" compromise between them):
Now, it's obvious that the only correct answer may be the middle one. After all, the tilt and eccentricity weren't even measured. They were calculated from mechanics of celestial bodies. The blue curve is a result of pure mathematics. And it's clear that a purely mathematical function calculated from several parameters cannot be a "consequence" of some random variable parameterizing the weather.

And while nice and smooth, this purely mathematical function isn't too simple. It has some frequencies with periods between 20,000 and 100,000 years overrepresented but the function is in no way periodic. It is just quasiperiodic.

So it's obvious that this purely mathematical function of time – whose only conceivable interpretation is the insolation at 65° N because it's how it was calculated – is the primary cause in the required causal relationship. The orientation of the Earth may affect conditions on the Earth, but not vice versa. Some mammoths' having a warm year cannot tilt the Earth, let alone change values of a mathematical function that may be calculated for all times just out of several parameters.

The rough sketch of the theory is certain. The only open questions are the technicalities: Where was the ice exactly? How exactly its volume translated to the temperatures in the rest of the globe? Is it better to use May, June, July, or some average? How much do these things matter? But if you understand this most important climate variability in the recent 2+ million years at least a little bit, you can't have a doubt that the ice age cycles were caused by the orbital variations, just like Milutin Milankovitch first proposed.

Because he denies the natural causes behind the glaciation cycles, Richard Muller is an unhinged crackpot. It's shameful that Quora is spamming people's mailboxes with this imbecile's delusions, it's shameful that kids at Berkeley or their parents are paying tuition to hear this idiot pretending to be a scientist.
Luboš Motl v 7:56 AM
Share