After the Velvet Revolution and Velvet Divorce, we experienced the Velvet Unpegging

I was doing lots of things online. Suddenly, I looked at a window with the exchange rates and... the euro was below 27 for the first time since the 2013 anniversary of the Great October Revolution. The central bankers removed the controversial policy on April 6th, half an hour after the noon, after a "regular" meeting of that 7-member board. Thankfully, they only announced their evaporation minutes later – otherwise traders would have bought trillions of crowns within seconds.

It could have been much earlier but some of them were tempted to do the step much later, too. I really expected that event for almost a week – and was watching the rates by peripheral vision, while multi-tasking, for many many hours. 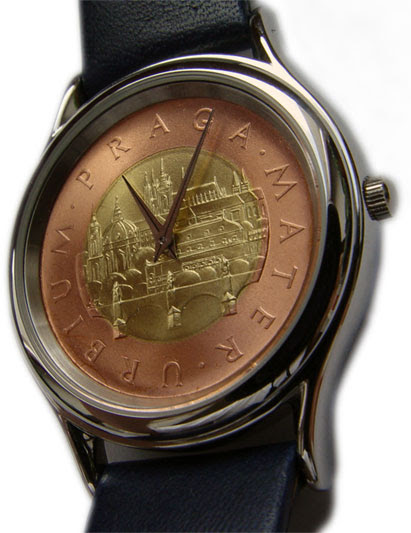 As I already said, sorry for that, the moment of the liberation was unannounced – the Czech National Bank has only confirmed to have evaporated minutes later, via Twitter and other resources. The motion of the exchange rate was rather smooth, going from the cap level 27.02 to 26.80 or so, and returning back to 27.11 during the first backlash when the hottest investors were closing their positions. So the rate stayed within 1% from the cap level for an hour.

A billion of dollars or two went into the crown in recent days, being satisfied with a 10-heller if not smaller profit. Those are different strategies. Instead of "different", the word might be "stupid", too. For a few days, the crown may stay above 26.60 because lots of traders have bought the crowns who are satisfied with a 40-heller profit. But this hot cash is eventually depleted and the supply of crowns at these rates disappears – the remaining holders are medium- or long-term holders who really want to see the rate 26 if not 25 before they consider selling CZK.


In the long run, the crown is bound to strengthen by something like 5-15 percent, in months or a year. At this time, half an hour after the exit, you can still buy the crown at the rate 26.80 crowns per euro or so (less than 1% strengthening so far). In this way, you can get it almost as cheaply as you could during the intervention era. (Sorry, it's closer to 26.70 now. Update II: closer to 26.65. No more updates will be made to this paragraph.)

So I definitely recommend you to short EURCZK – to buy Czech crowns – if you can afford a stoploss level at 27.30 or something like that, and if you can have this position open for months. I actually think that the market will eventually figure out that it's a good idea.

Concerning a sustainable rate, there are voices that say that the euro will still be 26.10 in a few months – just 3% strengthening of the crown. When the interventions began, it was about 25.75 – five percent stronger than the cap. But if you used the Big Mac Index, or the brutally divergent nominal and PPP GDP – by a stunning factor of 1.8 – you could argue and some analysts have argued that the sustainable rate of one euro could be even below 20 crowns per euro. Well, 27/1.8 is equal to 15 (crowns per euro), if you need to know. I don't believe we will get there this year but it's a level that the country could actually survive just fine, I think.

A year ago, Roklen Research decided that the U.S. dollar should weaken by 52.62% relatively to the crown. ;-)


It will be gradually swallowing the crowns from the impatient investors who want to lock their so far small profits really quickly. (The crown weakened to 27.25 last Friday, so the profit to 26.75 seems just very small to me.) I guess that lots of these people and companies that will be buying crowns will be big institutional investors – banks like ING and many others – that are now guaranteed that the total number of crowns in the world won't diverge.

So be as quick as possible in buying crowns – shorting EURCZK – if you can. Don't dream about getting much more than 26.90 for a crown, you could miss the opportunity. I think that the number of buying orders if the euro returns above 26.90 again is huge at this moment. You may also buy purely Czech stocks which may give you the strengthening of the crown on top of the expected yields – e.g. Komerční banka and Moneta (banks), ČEZ (top Central and Eastern European utility) – and, if you don't mind small stocks, also Unipetrol, Stock Spirits, Pegas Nonwovens, and Kofola.

Czechia has become the 17th country in the world according to the foreign currency reserves. In the European Union, it's right after the "Munich Four" group of European powers. This (DE, FR, UK, IT) is supposed to be an analogy of the "Visegrád Four". ;-) And Czechia is really just dozens of percent below each of the Munich Four nations. In February, Czechia trumped Trump's U.S. in the amount of foreign reserves.

Switzerland is still well ahead of us – by a factor of 5. This factor exceeds the ratios of GDPs, which is 2 or 3, by PPP or nominally. Because of the developments and mostly big speculators that have hoarded lots of crowns, the Czech crown has become a minor reserve currency. It may ultimately be a good thing although I obviously think that the most important principle of the free markets say that the interventions were evil.

Previous blog posts containing koruna and Czech crown. I don't have enough time to explain all the things again.


P.S. I think that most of the analysts were wrong and I was right. There was no substantial volatility so far, crown did strengthen gradually and visibly, going towards its fair value – although, yes, I did expect the speed of strengthening of the rate to be 5 times faster or so. But 1.5% of strengthening in 3 hours isn't too bad. Of course, things can go differently in the coming days and weeks.
Luboš Motl v 1:17 PM
Share