Last night, before I went to bed, I saw an article about a proclamation by the social democratic chairman of the Czech Senate – the upper chamber of the Parliament – Mr Milan Štěch (I know he has been a top politician for many years but I don't remember a single thing he has done or said in his life so far), a former communist, who said:


I think that there exists a large enough set of people, the pseudo-entrepreneurs, who are working as self-employed people or entrepreneurs (i.e. as OSVČ, please get used to this acronym) and they are not effectively exploited from the viewpoint of the national economy. We should gradually double or triple the minimum payments (healthcare insurance and contributions to the pension funds) that these people make to the government so that tens of thousands of them will prefer to be hired by someone and become employees.


Well, yes, I was somewhat scared – not that the doubling or tripling would be totally devastating. It would be unpleasant, anyway. During the tenure of the current government, I got so used to this kind of left-wing intimidation directed against OSVČ and the increasing bureaucratic and other harassment of the people who lead businesses or who work independently to make their living that I assumed that there will be silence and this proposal may be gradually supported by lots of people and maybe adopted after the elections.

The number of extra bureaucratic burdens, forms, and bans that the current government introduced in recent years was substantial. The "verification reports" for the payers of the value-added tax. The Croatian-style "fiscalization" – mandatory real-time reporting of all cash transactions done by businesses through Internet-connected devices that every businessman has to buy and maintain. Most recently, just days ago, the smokers' super-liberal Czechia turned into another hell of prohibition when the almost complete permission to smoke in pubs was changed to a nearly complete ban. And there were other events like that.


You know, a problem is that the Czech nation has been a nation of the working class and peasants for several centuries. This fact has boiled down to lots of events that increased the selection. After the disastrous (from the Czech viewpoint) 1620 Battle of the White Mountain, Catholics – and German-speaking folks – became the upper class again, treating ethnic Czechs (and Protestants) as second-class citizens. Recatholicization began along with Germanization. Well, Protestants such as post-Hussites were really screwed and many of them were lucky to emigrate. Ethnic Czechs could survive but... In particular, all higher classes tended to speak German because it was just the... lower classes that were speaking Czech, as everyone suddenly "knew".

To some extent, this process stopped by the National Revival 2 centuries ago when a powerful enough gang of Czech intellectuals made their steps to be sure that the Czech language is capable of doing everything that German could do, and political steps so that this fix is imprinted into the behavior of the society. And improvements like that allowed Czechs to become a pioneering nation of Central Europe in mid 19th century when it came to industrialization, among other things.


But the century of the Germanization of the Bohemian elites had to have consequences. Many of the upper class people who got Germanized were turned into self-described German families and they were expelled in 1945. But even before that, there were lots of events that cemented the mostly working-class-and-peasant image of the Czech nation. The ethnic Germans tended to live in the mountains and often had to rely on themselves, their crafts etc. It was more usual for the Czechs to be employed by someone else, e.g. farmers.

And when factories such as Emil Škoda's huge factory in Pilsen were built around the 1860s, they needed lots of workers. Ethnic Czech people whose life in the countryside looked miserable moved to cities like Pilsen. So Pilsen and a few other cities became "safely Czech-dominated" but the price was that the working class was guaranteed to become a big and growing fraction of the Czech nation.

Most importantly, the entrepreneurs were systematically eliminated after the 1948 communist coup in Czechoslovakia. Farmers were forced to collectivize their assets – Kolkhozes were born. Factories, castles, and all similar big assets were simply confiscated by the government. Some of the owners were forced to become workers, sometimes miners in unhealthy uranium mines. Some others managed to emigrate – 300,000 Czechoslovaks emigrated after 1948 and 1969.

These were unpleasant blows to something that was a standard Western nation with its appropriate elites before 1620. But they weren't quite irreversible. A nation can develop new intellectuals, new elites, and so on. And this process started especially after the 1989 Velvet Revolution, of course. Lots of people started their own small or larger businesses, many of them failed, some of them succeeded, but these events were obviously necessary to achieve the much better prosperity we see today.

These days, Czechia has 10.55 million people and the population growth rate is a green zero – and would be a red zero if we weren't getting easy-to-assimilate immigrants mainly from Ukraine. Almost 1 million of the people are OSVČ i.e. self-employed. It's a minority that is unlikely to "win the elections" by itself – especially because it's highly politically diverse or fragmented – but it's a minority that can be heard.

Thankfully, I was reminded of the self-confidence and assertiveness that the Czech OSVČs – and their supporters – have regained. Mr Štěch, the leader of the Senate, was flooded by feedback that pointed out that he thinks just like Gottwald who sent all independent people and entrepreneurs to factories after 1948. Mr Štěch clearly thinks as a hardcore Bolshevik (he joined the communist party in the late 1970s so it shouldn't be shocking) who has almost no idea how the life and business outside politics works and he has heard about this fact from very many people. Lots of people have explained that the OSVČs are paying less money to the social, healthcare, and other systems, but they also take much less from these systems, have extra risks, many fewer guarantees from the government, and so on.

The negative response was so loud that not just some conservative opposition parties but also some other social democrats have criticized Mr Štěch. Well, the new de facto chairman of the social democracy who superseded Mr Sobotka, the Interior Minister Mr Milan Chovanec of Pilsen, has at least called Štěch's proposal "unrealistic" and he said that the party should focus on some positive things – [populist] comments that this group and another should get more money. ;-) Not great but not bad.

It's surely true that one could build a greater number of cars if some currently self-employed people became operators on assembly lines etc. But as many have pointed out, it's completely sick for a politician (who is a top parasite disconnected from real-world problems of the non-politician people, to make it worse) to consider the citizens to be just tools of production. Citizens are primarily free people who may decide about their life – probably in ways that they believe to be optimizing their subjective well-being – and they should have enough freedom to do so. If they have to pay amounts comparable to the minimum salary just to be "allowed" to be self-employed and avoid the employee status, it means that they have been stripped of their freedom.

So the self-employed people are essential to be "really allowed" because they do lots of services; some villages' very survival may completely depend on the poor enough OSVČ that Štěch could liquidate; they're the flexible folks who can create new methods of production and new services when new ideas are invented by themselves or someone else (and some of the "mostly financially secured" OSVČs may do their very private scientific research which may be more important than a few more produced cars); their predecessors have really been responsible for the construction of all factories and all the real progress; too big concentration of people into "masses of workers in a big factory" makes the system severely vulnerable in the case that a company or two goes bust; and I also think that it's very important to make it easy for Czechs to become independent in this sense in order to reduce the excessive percentage of the working class within Czechia. Somewhat like China, Czechia is still rather close to a "nation of workers on the assembly line". The salaries aren't bad and the workers have become operators and they must really know some know-how how to operate modern machines that produce things.

But I think it should be a matter of common sense that one just shouldn't want his nation to be stuck at this level. Other nations are obviously better off because they are composed of the "higher classes" while they outsource the lowly working-class occupations. The higher barriers the entrepreneurs and self-employed people will face, indeed, the greater the percentage of the lowly workers we will have, and the more we will be just tools used by some foreign bosses.

I am happy that the reaction to Štěch's proposal was so loud and negative. It sounded more negative than reactions to very similar anti-OSVČ proclamations by Mr Mládek, another social democrat, and some labor union bosses a few years ago. But don't get me wrong: I don't actually think that the opinions about these "class struggle" issues are alright in my nation. I think that many of the politicians are either reasonable because they have had some exposure to their own business; or they were just terrified by the loud negative reaction.

But I think that if you asked the people who vote for the social democracy, the communists, or the populist billionaire's ANO movement, most of them would tell you that they agree with Štěch's proposal to convert the OSVČs to workers. The hatred and jealousy driving the class struggle is alive, kicking, and incredibly widespread. So while everyone is saying that Štěch has terribly damaged the social democracy, I actually think that he made sure that the social democracy will steal some 5% or 10% of the voters from the billionaire's ANO because the hatred against OSVČ, supported by their almost complete misunderstanding how business works, is the #1 reason that drives the proud Czech working class or "proud employees" to the garbage parties such as the communists, social democrats, and ANO.

The ideal result would be if Mr Štěch managed to weaken Babiš's ANO dramatically – but he would be expelled from the social democracy, anyway, and the strong post-election social democracy would behave as a party supporting OSVČ, after all, and could join some "democracy-saving" (ANO-free and communists-free) left-right coalition that would be effectively pro-capitalist. 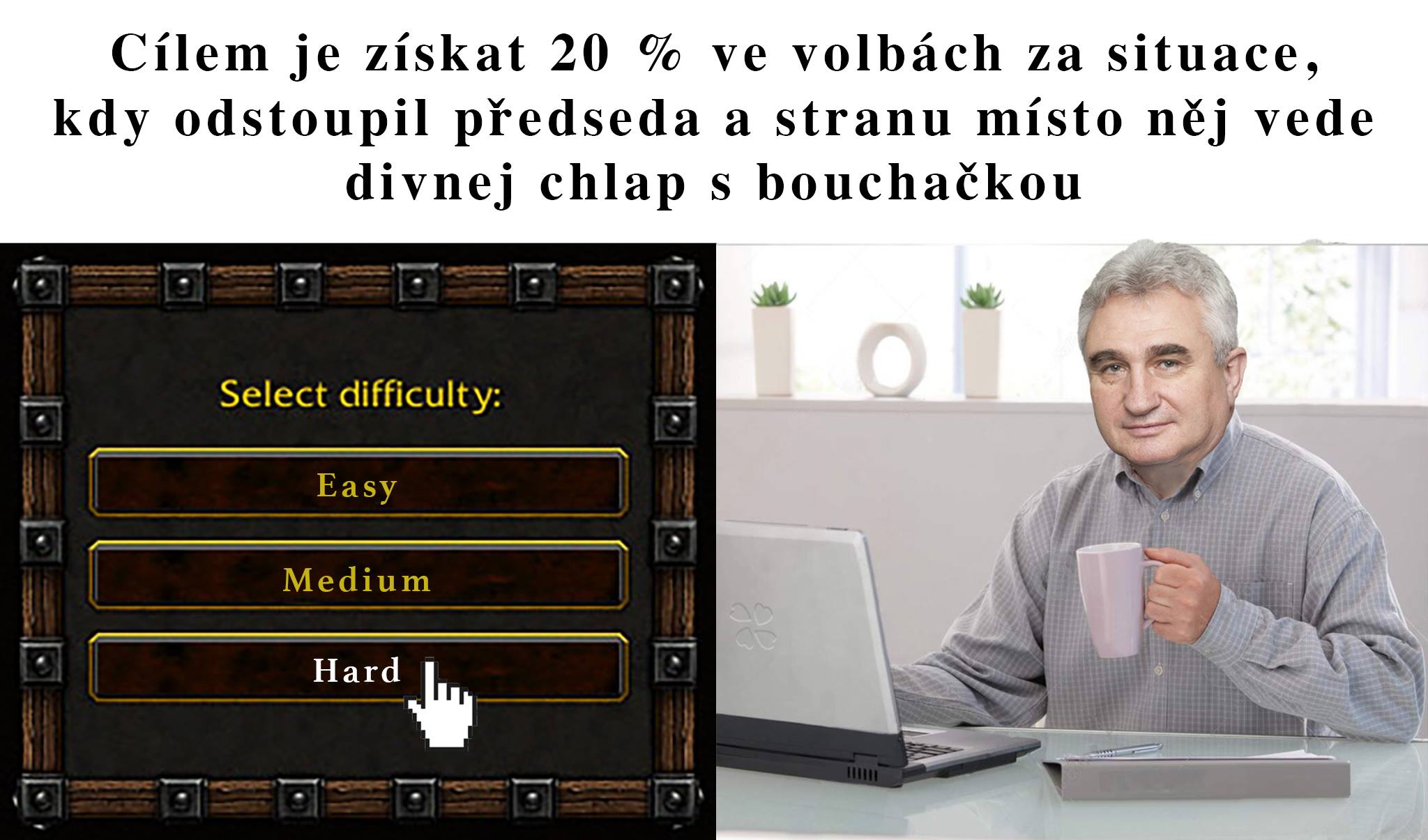 A fun Štěch meme. A computer game. The goal is to accumulate 20% of votes in the elections after the chairman of the party divorced, resigned, and the party is now led by a strange man with a rifle.


P.S.: There have been lots of voices that disagreed with Štěch and he was forced to sort of revise his statements. He deeply appreciates OSVČs, we learn, is trying to help them to avoid a miserable retirement, and so on. I wasn't really surprised by Štěch's original statement because I think it's widespread in the left-wing part of the nation which is big. I was much more shocked by the opposite opinions of some folks. Nice surprises. In particular, the chairman of the Communist Party of Bohemia and Moravia Mr Vojtěch Filip said that OSVČs were great because they were almost no burden for the state! Cool. This is really a libertarian viewpoint – surely not a communist one. ODS and others should reconsider the coalition ban with the communists. I may be overlooking something but it seems to me that I could happily okay Filip as the minister of social affairs, for example. ;-)
Luboš Motl v 7:55 AM
Share