Genius: after the last Einstein episode

The program was rescheduled for another season that will cover the life of Pablo Picasso. I think it was very well done and I have learned some new things about Einstein's life. Despite the systemic importance of Einstein in theoretical physics, the questions whom he argued with or whom he had sex with haven't been the things I've been immensely interested in – people who aren't into physics are often puzzled by this fact but those who have a clue aren't – but I think that it made sense to learn about these matters. 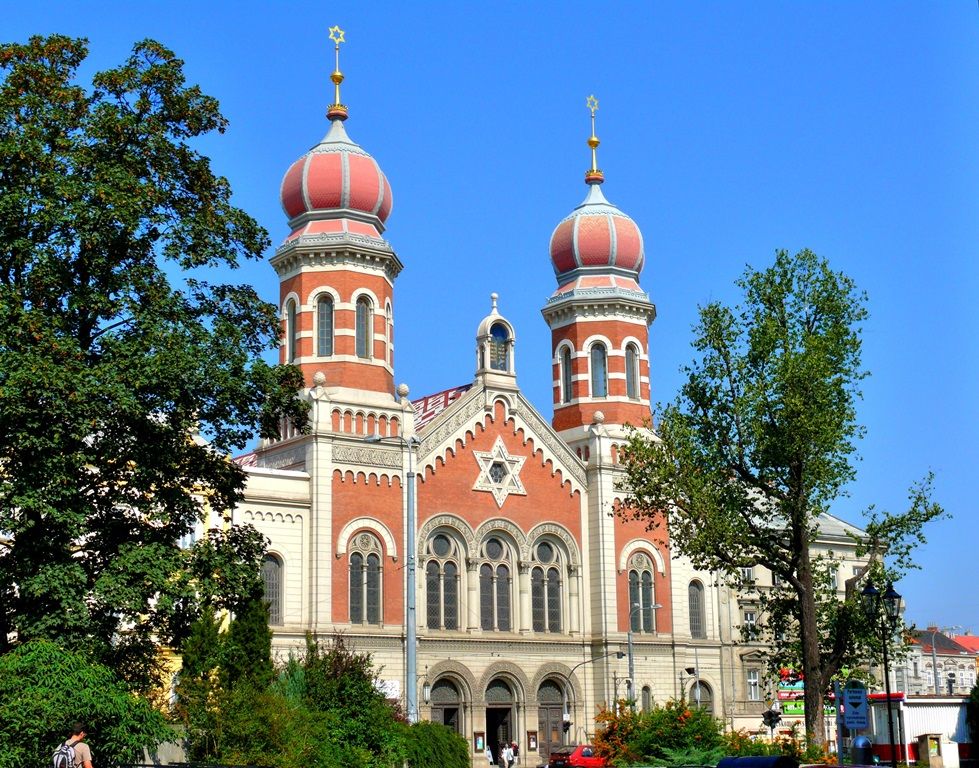 The series was filmed in Czechia and folks like me could see many familiar places – ministries in Prague recycled as Nazi headquarters, spa towns and castles in Northwestern Bohemia used as Switzerland, and many others.

A Pilsner guy like me had to laugh out loud when I was shown the building above – the Great Synagogue of Pilsen, the second largest synagogue in Europe and about fourth in the world (Street View) – with the caption "Bronx, New York, USA". ;-) So at least I know one place in Bronx very well now. Sometime during a pro-Israel fundraiser before the Second World War, inside the Pilsner synagogue, Einstein touchingly collected one quarter (of a dollar) from a Jewish boy whose father was arrested as a Bolshevik. I believe that the Pilsner synagogue must have represented this one in Bronx.


Unless I am confused, this Apolinářská street in Prague (Street View)

which has a birth clinic and is just some 100 meters from the oldest building of the Math-Phys Faculty of the Charles University, my Alma Mater, was used as Princeton last night. I've never thought about the street as a counterpart of the famous campus in New Jersey – that my Alma Mater in Prague was some 100 meters away from Princeton – but there is some similarity here, right? ;-) The actual building where Einstein taught while in Prague is just hundreds of meters away in the opposite direction than the Math-Phys building, along with the psychiatric asylum which is just on the left side of the street on the picture above. In a third direction away from the place, you find Albertov where the 1989 Velvet Revolution basically began by a student rally.


OK, so we learned that Einstein had some disputes with his excessively authoritative, prejudiced, and practical parents – about his jobs and about his love, among other things. He was fighting against the authorities, like excessively constraining instructors in the late 19th century, and he had troubles with it. He fell in love with Mileva Marič primarily because she was smart. She sacrificed a lot for him and grew increasingly hysterical and the divorce seemed necessary. And Einstein have had various kinds of seriously bad relationships with Philipp Lenard, with his sons, with the FBI director J. Edgar Hoover and later with Joseph McCarthy for similar reasons.

Aside from Mileva, he's had romantic relationships with a cute Maria in Switzerland when they were teenagers, with some secretaries, female physicists at conferences, and then he married his cousin Elsa Einstein so she didn't even have to change the name. An important old Einstein's relationship was one with his favorite Russian babe, Margarita Konenkova, who just happened to be with him (partly) because she was a Soviet agent. I guess that she couldn't find too many interesting things (e.g. from Stalin's viewpoint) from Einstein.

Einstein was amazingly original, creative, and basically "deliberately obsessed" with these qualities, too. He had to fight Woit-like characters who hated theoretical physics as a matter of principle – top Nazi physicist Philipp Lenard was the key example. When he became world-famous, I think that he began to enjoy a comfortable life with very limited duties. And his research from the 1930s surely looked like a pretended activity to me. Einstein became a physical dinosaur, his unified field theory research was absolutely hopeless, and his criticisms of quantum mechanics were getting tiresome at some point – in the last episode, his long-time friend Niels Bohr ran out of patience at some moment and I am not surprised.

He was surrounded by people who often had strong opinions, life energy. His last secretary Helen Dukas was unusual because she was working hard to be a loyal, silent servant – almost a woman without a personality. However, shortly before he died, she started to express her opinions and Einstein didn't like those too much, either.

Albert Einstein has been connected with the far left, obviously un-German but also potentially un-American, ideas and movements. Well, what did he really believe about politics? I've read many political essays he wrote before I have watched this series. He was clearly independent minded and close enough to some "socialist" ideas. On the other hand, I do think that he wasn't a real communist and he was genuinely terrified by the discipline that was expected in totalitarian communist countries (and parties). Throughout his life, his relationship to the countries where he lived was extremely weak. He was always a Cosmopolitan guy to a large extent although once he spent a decade in Germany in the 1920s and 1930s, it started to feel like he has settled there. But his globalist ideas and the attachment to other Jews – and even to Israel as a newborn country as well as Judaism as a religion – was always stronger than his feelings for Germany or the U.S., for that matter.

He had mixed feelings about the bomb. Well, aside from \(E=mc^2\) which shows that there's a big potential to get lots and lots of energy from matter, I think that he wasn't really useful for the construction of the nuclear bomb (or nuclear power plants). Leo Szilard made him write a letter to the U.S. president to support the construction of the U.S. bomb. Six years later, the same Leo Szilard begged Einstein to write another letter that the nuclear arms race had to be stopped. Funny. Even if Einstein could have been useful for the construction of the bomb, and I think that he couldn't have been, he was considered politically unsafe – much like Szilard, certainly Bohm, and many others who were close enough to Einstein.

So I have learned some new things and I was often entertained and had to laugh because many of the questions, desires, disputes, and tricks are timeless. Lots of the strange events from Einstein's life are still happening to one extent or another.


Aside from Einstein and the people above, we've learned a lot about Niels Bohr who would keep on trying to persuade Einstein to accept quantum mechanics for decades; a good guy Werner Heisenberg who remained compatible with the Reich and a patriot but was unable to create the bomb – but after he heard about Hiroshima, he would say "it's all trivial, look how it works" LOL; Fritz Haber, a Lutheran man who loved Germany and even invented a tool of genocide to help Germany but Germany didn't reciprocate the love because he was still a Jew; Raymond Geist, a worker at the U.S. embassy, whose discussion with the Einsteins looked tense but who ultimately risked his job in order to give the stamp to Einstein (their getting closer was cute; later, Geist helped to save i.e. transfer some 50,000 Jews to the U.S.); Max Planck who was a senior guy from the beginning but during Nazism, he was surpassed by Lenard in particular. Also seen were Franz Kafka, J. Robert Oppenheimer, and many others.

In Czechia, the program attracted eight times more viewers than the previous average programs in the same time slot, especially lots of young viewers. But because NatGeo is still an "obscure TV channel" (which I can only see because of a slight coincidence), the number of Czech viewers was still of order 50,000 only.

Czech readers who have 3 spare hours may watch a physicists' lecture Genius, behind the scenes. Two more hours.
Luboš Motl v 7:10 AM
Share