Today, on June 10th, it's been exactly 75 years since the Lidice massacre. The Nazis fully eradicated a village West from Prague as a revenge for the assassination of Reinhard Heydrich, the acting protector of Bohemia and Moravia and a co-father of the Holocaust. (Previously, Heydrich was also the director of Gestapo and Reich Main Security Office, and the president of the IPCC – before Pachauri.)

The sculpture of 82 Lidice (=Peopleville) kids murdered in 1942 by Ms Marie Uchytilová, also the author of the classic one-crown coin. For the sake of confidentiality, faces aren't precise but the distribution of the ages matches the reality.

In May 1942, the assassins were sent by the British secret services and the Czechoslovak government in exile. They were supposed to parachute here near Pilsen but they landed on the other side of Prague, due to navigation glitches. They got to Prague and on May 27th, the Operation Anthropoid [=beast resembling a human being] began.

Heydrich and his driver were going from his home in Panenské Břežany (Virgin Pregnantville) to his Prague Castle office in their Mercedes 320 Convertible B. At 10:32 am, they appeared in a curve in a Northern suburb of Prague. Jozef Gabčík – the Slovak assassin – revealed his Sten submachine gun under his coat but it jammed (see the assassination from Lidice 2011). So his pal and backup, Czech assassin Jan Kubiš, threw a grenade. It didn't immediately kill the Butcher of Prague but caused an injury which allowed the mass killer to die on June 4th, after a week of futile struggles.

Back to the grenade scene. The driver was trying to catch an assassin, failed. Ms Marie Navarová was trying to help Mr Heydrich. She was finally compensated for her exemplary attitude before she was found to be feeding the resistance movement as well and she was arrested. After the war, communists arrested her as well for her collaboration with the Nazis. At any rate, a big hunt began to find the assassins. They were ultimately found in an orthodox church (of St Cyril and Methodius) in Prague. The church was flooded, the assassins were forced to commit suicide (a standard rule for resistance fighters, one to prevent their leaking important secrets during interrogation).


That was not the end of the story. The typical exchange rate for lives was 10 Czechs per 1 German. So when a German guy was killed, the fair revenge was thought to be the murder of 10 Czechs. (This followed the distorted exchange rate for the currencies. 1 Reichsmark was forced to be 10 Czech crowns even though a market rate would only be about 7.) Well, Heydrich must have been more than an average German. Hitler decided to find and murder 10,000 top Czechs to repay the assassination of Heydrich.

It wouldn't be the first time when Czechs were being decimated "from the top". For example, 27 Czech aristocrats were executed on the Old Town Square in 1621 – for their failed uprising. And I don't have to explain to you how the communists have treated the actual Czech elites – and that most of the 300,000 post-1948 emigrants from Czechoslovakia were "more likely to be elite people" than the remaining ones, too. The fact that the Czech nation sometimes acts as a uniform mass of the working class isn't a coincidence – it largely boils down to some systematic social engineering in the past.


It's very likely that I couldn't have been born if Hitler's plan to eradicate the top 10,000 in 1942 were realized because I think that my maternal grandfather Mr František Koliha, a painter, could have belonged to this elite of top 10,000 folks. Well, Hitler was fortunately explained that this mass destruction of the Czech elite would have severe consequences for the productivity of the Protectorate's economy – which was a reliable engine in the core of the Third Reich – so he agreed with a more modest reprisal.

A romantic letter from the owner of a battery company in Slaný (nearby larger town; the name means "salty") to his female employee – that boasted some contacts with the resistance movement just to impress the woman – was used as an excuse to flatten the whole village of Lidice, some 10 miles West of Prague, which had some 500 inhabitants. 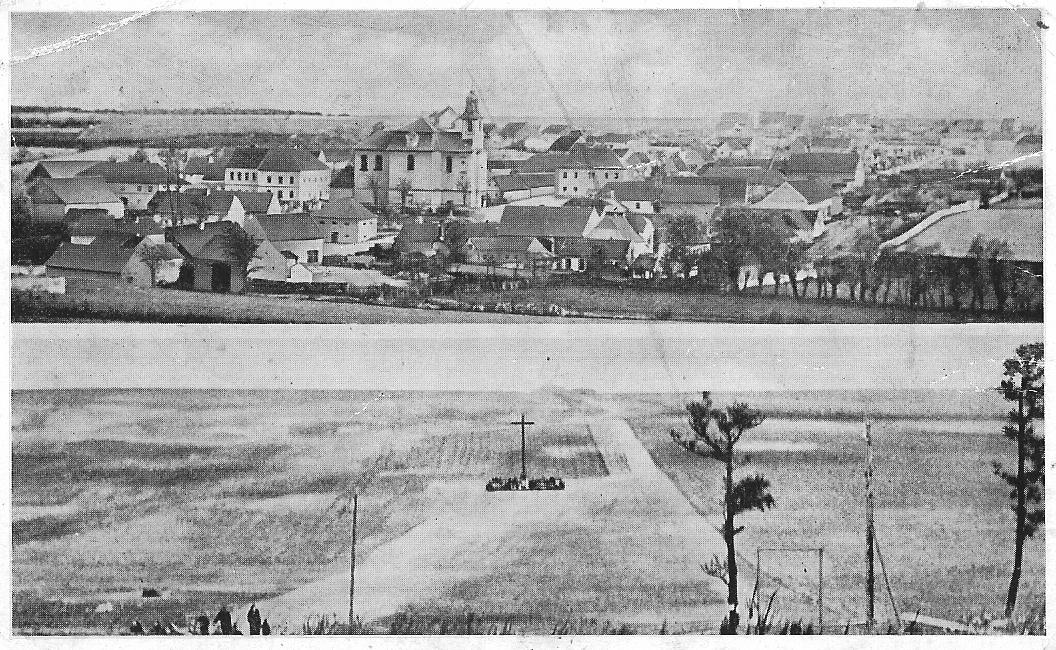 Before and after. Can you find 5 differences? More old pictures.

On June 10th, K.H. Frank, the new protector, personally arrived there to supervise the liquidation of the village. 192 men (age between 14 and 84), 60 women, and 88 children were murdered. The whole story is covered in the touching 2011 blockbuster movie "Lidice". 173 men (including the priest) were shot dead immediately (street cops from the town where Heydrich was born were brought to do this job), the other two dozens were found later. Only a few kids were classified sufficiently Germanic to be worth Germanization and they were placed in German foster families. The rest of the children and women were moved to concentration camps and one-half or so of both groups were gassed to death.

Ms Jaroslava Skleničková is one of the last living kids who survived the total burnout. She tells us that she was brought up by the Ravensbrück concentration camp where she learned a lot. Only in 1945, she learned about the fate of the village. She returned to the rebuilt Lidice only as a pensioner, and she bought an iPad, too.

If you really need to see what the mass execution of the men looked like. From Lidice (2011).

All buildings including the (St Martin) church were put on fire, their ruins were detonated days later, all trees were cut (except for one pear that the Nazis believed to be dead: it is a historical tree protected by the government now), all farm and domesticated animals were burned, the pond was destroyed by bringing brash – special temporary tracks were built to achieve this goal. A creek was artificially redirected so that nothing would be left at the same place. The whole area of the village was supposed to become a field with no traces of the village. (These days, there are memorials everywhere.) The Nazis' fanatical cruelty was just amazing, especially if you realize that they knew very well that none of the folks in the village had anything to do with the assassination. But the losers were too weak to do something to the folks in London who succeeded in removing the beast of Prague – so their revenge was targeting innocent rural folks. I mean, this nasty guy would have been executed in 1945 or 1946, anyway, so why was there so much hysteria about the acceleration of his fate by 3 years?

As the 2011 movie discusses in detail, one man from the village, Mr František Saidl (renamed to Šíma in the movie, probably because they didn't want the viewers to be distracted by Saidl's originally German name), was just serving his time in a Prague prison – because of a brawl in a pub that ended with a death. His imprisonment was the reason why he survived. When he saw that his village had evaporated, he wanted to be executed despite the delay. To make sure that he would be executed, he pointed out to a Gestapo apparatchik that Heydrich was a stinky pig who deserved to be killed. The Nazi authorities refused to execute him, anyway, claiming out that everyone already knows that Heydrich was a stinky pig, it was already legal to endorse the assassination, and the EU required too much paperwork whenever someone is shot dead. This Mr Saidl remembered lots of details about what the village had looked like. After the war, however, no one was interested. His very existence turned out to be inconvenient for the post-war (and increasingly communist) simplified image of that village. "All men were killed" was pretty much what we were taught, too.

Two weeks later, on June 24th, a 10 times smaller village Ležáky (=Lagers or Deadstocks) was flattened, too. This smaller village was never rebuilt. Lidice was actually not rebuilt by the communists – but largely thanks to the generosity of miners in Stoke-on-Trent in England in 1947.

The story of Lidice was heartbreaking but I personally think that it was still right to organize the assassination of Reinhard Heydrich. Assassinations like that should have taken place much earlier than in 1942 – lots of suffering could have been avoided in that way. There was a clear difference between the ordinary Czechs' and the Czech political elite's attitudes to Nazism. Edvard Beneš et al. who were in London were trying to fight for their homeland – while the ordinary folks were mostly satisfied with their lives on the occupied territory. Well, I am surely one of those who find the attitude of the politicians much more ethical and inspiring than that of the "flexible" ordinary Czech folks.

It was right to execute the butcher in the sake of the basic dignity of my nation, its status as a winner of the war, return of the Sudetenland, but also because Heydrich was a genuine threat for the lives of tens of millions of additional people. Historians often say that Heydrich wouldn't have hesitated for a second to realize the plan to murder some 1/2 of the Slavic population of Europe, among other things. In that comparison, the cruel sacrifice of Lidice is a cherry on a pie.

Two weeks after the massacre, the Czechoslovak president Dr Edvard Beneš made a statement in English. In our records and the humanity, Lidice will loom large. I am sure that the post-ward expulsion of Germans was at least partly a retribution for this massacre, too. Without the assassination and the subsequent events, Sudetenland could have very well stayed a part of German after the war. In August 1942, Churchill legally nullified the Munich Treaty and in September, Lidice Shall Live was backed by some British authorities.
Luboš Motl v 3:07 PM
Share