Exactly 100 years ago this weekend, on July 1st and 2nd, 1917, the Battle of Zborov took place. Zborov is a town in Ukraine – just outside the Subcarpathian Rus that belonged to Czechoslovakia between 1918 and 1939. 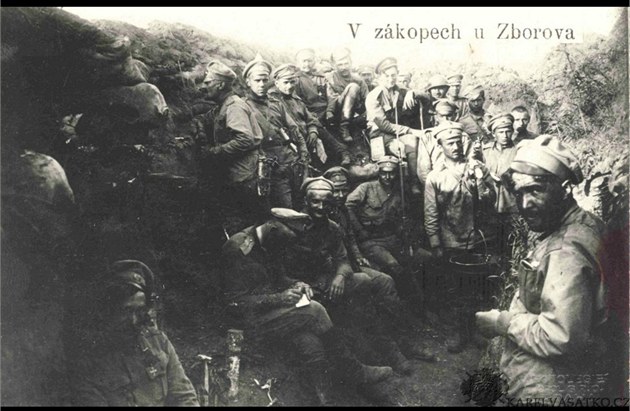 Czechoslovak legionnaires in the trenches.

I didn't know much about the battle but it was a pretty fascinating moment of the history and an interesting battle.


At that time, Russia was attempting an offensive, with some help from Romania. The Russian efforts failed – but the Battle of Zborov was a rare exception in which the Russian Republic succeeded – the Russian offensive ultimately failed just two weeks later. But it wasn't Russians' achievement. It was mostly Czechs' and Slovaks' achievement (yes, Slovaks were underrepresented). The Russian general Trojanov only used groups of volunteers – and they happened to be Czechs and Slovaks.

The newly tested Czechoslovak Legions (this name of the units was only retroactively invented when Czechoslovakia was established) were composed of units that had nice Czech historical names – the John Huss regiment and several others. Many of them were Austrian-Hungarian prisoners of war taken by the Russian Army. It turned out they weren't really enthusiastic about the defense of our old empire and the Russian Republic started to trust them afterwards. However, it seems that many Czechs and Slovaks who were not prisoners of war were fighting as well – or supporting the Czechoslovak Legions from a distance.

There were Czechoslovak Legionnaires in Italy and France, too. In France, it was the "Nazdar Company" – where "Nazdar" is a Czech word for "Hello" that literally means "To[Y]ourSuccess".


To make the story short, the Czechoslovak Legions have won the Battle of Zborov, despite a lower strength (3,500 Czechoslovaks against 5,500 Austrian and Hungarian troops) and rifles that weren't good at that time yet. (After Czechoslovakia was born, its army returned close to the industrial edge quickly.)

The battle is sometimes jokingly referred to as the Battle of Three Czechoslovak Presidents, a parody of the Battle of Three Emperors in Austerlitz, Moravia (1805). Why? Well, the founder-president Prof Thomas Garrigue Masaryk – located in Petrograd at that moment – was communicating with the battle field through posters and telegrams. Ludvík Svoboda, a celebrated Eastern Front general during the Second World War and a relatively pro-reform guy who was nevertheless used as the president after the 1968 occupation to make the regime more credible, was fighting as a rank-and-file legionnaire.

Well, the legend has it that Comrade Klement Gottwald, who (as the head of the local Stalinists) became the new leader of the Czechoslovak communists in 1921 and the first working-class president in 1948, was also fighting in the Battle of Zborov. But if that's true, and the evidence is a bit murky, he was fighting on the side of Austria-Hungary. What an irony. The first progressive president who cemented our relationships with the Russians after the war was fighting on the reactionary, feudal side against the defeudalized Russia. ;-)

It could look like his personal weirdness but after all these years, I find the First World War extremely confusing because the two sides were divided a bit randomly and the ideological differences were almost non-existent. It's as if you divide a bunch of your friends to two teams if you want to play soccer – except that they were killing each other, almost more brutally than in the Second World War.

Needless to say, I think it was a promising period for Russia. You may have noticed that the term "Russian Republic" has been used above. It's actually wrong because the Russian Republic formally existed for less than six weeks, between early September and mid October. But people generally like to extrapolate the term back to March 1917 when Emperor Nicholas II resigned. Throughout much of the year 1917, Russia was on its path towards some kind of a Western arrangement. These trends were interrupted by Lenin's Bolsheviks during the Great October Socialist Revolution (which wasn't great, didn't take in October but in November, wasn't socialist, and was just a coup, not a revolution).

Czechoslovak Legion in Yekaterinburg, Pilsen's beloved twin city. Fortunately, my hospitable hosts – a family – in Sverdlovsk, when I lived there in 1988, forgot to ask me what I thought about these legionnaires calling themselves "a veterinarian [beasts-curing] school" who must have killed lots of red comrades in that city to get this proud LOL.

These days, due to the brute-force strength that the Soviet Union accumulated, Russians are voting the Georgian mass killer Joseph Stalin as the most adorable 20th century Russian politician. Most of us outside Russia are stunned by the bad taste of this choice and so am I. But I still have some understanding – whether you like it or not, Stalin made Russia great again, at least in some really rough sense. I believe that Russia could have become greater in some more important aspects if the republicans got more space to reshape the large country even after 1917.

The Czechoslovak victory had almost no impact on the situation on the battlefront but was an excellent P.R. for Czechoslovakia that would be created as a country just some 15 months later. Czechoslovakia was going to be a modern country built on P.R. – especially P.R. that the first president Prof Masaryk addressed to the important Western leaders whom he befriended sufficiently well.

"We're whitening" (referring to the red-vs-white civil war in Russia), a Czechoslovak P.R. painting with a map of Siberia's railways by František Parolek from May 1918

In March 1918, the Czechoslovak Legion also won another Battle of Bakhmach in current Northern Central Ukraine – which was against some other losers calling themselves the German Empire. But from that moment on, especially from May 1918, the Czechoslovak Legion was heavily affected by the changes that took place in Russia and was primarily fighting the Bolsheviks. At some moment, the Czechoslovak Legion controlled the whole trans-Siberian railway (with the help of some armored trains etc.) – and therefore most of Siberia, in some practical sense. The period that was taking place exactly 100 years ago was a somewhat romantic example of the revived Czech passion for combat – something that shrank to a tiny fraction of itself due to the peacemaking and loyal attitude to the 1938, 1939, and 1968 occupations. Flexibility, bent spines, and down-to-Earth peaceful pragmatism may be associated with the Czech national character today but exactly 100 years ago, people would probably describe our national character differently.
Luboš Motl v 6:51 PM
Share