Yesterday, the Fermilab brought us the press release


celebrating a new result by the Dark Energy Survey (DES), a multinational collaboration studying dark matter and dark energy using a telescope in Chile, at an altitude of 2,200 meters.

DES wants to produce similar results as Planck – the modern sibling of WMAP and COBE, a satellite that studies the cosmic microwave background temperature in various directions very finely – but its method is very different. The DES telescope looks at things in the infrared – but it is looking at "regular things" such as the number of galaxy clusters, weak gravitational lensing, type IA supernovae, and baryon acoustic oscillations.


It sounds incredible to me but the DES transnational team is capable of detecting tiny distortions of the images of distant galaxies that are caused by gravitational lensing and by measuring how much distortion there is in a given direction, they determine the density of dark matter in that direction.


At the end, they determine some of the same cosmological parameters as Planck, e.g. that dark energy makes about 70 percent of the energy density of our Universe in average. And especially if you focus on a two-dimensional plane, you may see a slight disagreement between Planck's measurement based on the CMB and "pretty much all other methods" to measure the cosmological parameters. 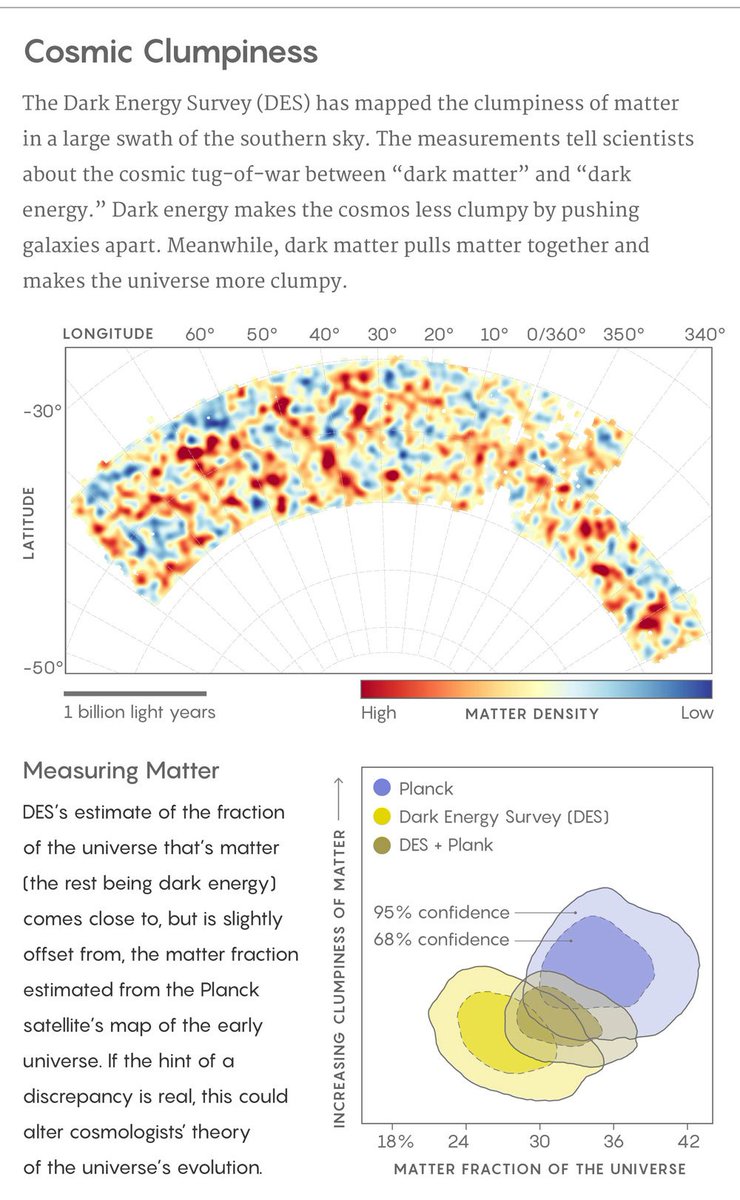 Planck (the blue blob) implies a slightly higher fraction of the matter in the Universe, perhaps 30-40 percent, and a slightly higher clumpiness of matter than DES whose fraction of the matter is between 24-30 percent. Meanwhile, all the measurements aside from the truly historicaly "pure CMB" Planck measurement – which includes DES and Planck's own analysis of clusters – seem to be in a better agreement with each other.

So it's disappointing that cosmology still allows us to measure the fraction of matter just as "something between 25 and 40 percent or so" – the accuracy is lousier than we used to say. On the other hand, the disagreement is just 1.4-2.3 sigma, depending on what is exactly considered and how. This is a very low signal-to-noise ratio – the disagreement is very far from a discovery (we often like 5 sigma).

More importantly, even if the disagreement could be calculated to be 4 sigma or something like that, what's troubling is that such a disagreement gives us almost no clue about "how we should modify our standard cosmological model" to improve the fit. An extra sterile neutrino could be the thing we need. Or some cosmic strings added to the Universe. Or a modified profile for some galactic dark matter. But maybe some holographic MOND-like modification of gravity is desirable. Or a different model of dark energy – some variable cosmological constant. Or something totally different – if you weren't impressed by the fundamental diversity of the possible explanations I have mentioned.

The disagreement in one or two parameters is just way too little information to give us (by us, I mean the theorists) useful clues. So even if I can imagine that in some distant future, perhaps in the year 2200, people will already agree that our model of the cosmological constant was seriously flawed in some way I can't imagine now, the observations provide us with no guide telling us where we should go from here.

Aside from the DES telescope, Chile has similar compartments and colors on their national flag as Czechia and they also have nice protocol pens with pretty good jewels that every wise president simply has to credibly appreciate. When I say "credibly", it means not just by words and clichés but by acts, too.

So even if the disagreement were 4 sigma, I just wouldn't switch to a revolutionary mode – partly because the statistical significance isn't quite persuasive, partly because I don't know what kind of a revolution I should envision or participate in.

That's why I prefer to interpret the result of DES as something that isn't quite new or ground-breaking but that still shows how nontrivially we understand the life of the Universe that has been around for 13.800002017 ;-) billion years so far and how very different ways to interpret the fields in the Universe seem to yield (almost) the same outcome.