The evidence backing the yummy theory seems very strong to me

I have previously heard about the theory but only yesterday, I was reading the evidence systematically, thinking about the chronology, and the theory looks persuasive to me.

OK, it's all about these two men. The right one is Francis Joseph I of Austria, an Austrian emperor. He was born in August 1830 and his reign lasted almost 68 years, from December 1848 to November 1916 (his death). For the last two years of the war, Austria-Hungary was ruled by Charles I of Austria.

OK, Francis Joseph I – nicknamed Old Procházka [=Walk, #6 most frequent Czech surname] in the Czech lands because of one of two stories – was our beloved emperor. But the monarchy became an anachronism, nation states were guaranteed to be born on its ruins in 1918, and the most important new country that was created was Czechoslovakia, with the capital of Prague, the "third capital" of Austria-Hungary. And Thomas Garrigue Masaryk [the middle name was taken from his U.S. wife Charlotte Masaryk] was Czechoslovakia's key founder and the first president (for almost 20 years).


Prof Thomas Garrigue Masaryk (see his statue in the D.C. which mentions he looked like an aristocrat) was born in March 1850 in Hodonín, Moravia to a family that was really really poor at that time. Nevertheless, it seemed extremely easy for him to become a student in Leipzig, a pundit in Vienna, the professor in Prague, a partner who talked to the U.S. president and others etc. And the similarity above – see the moustache and proportions – is a sign, too.


OK, he was born in March 1850 which means that he was probably conceived in June 1849. And because his mother was rather poor, it's likely that she was in her town of Hodonín at that moment, too.

TGM's mother, Ms Tereza Kropáčková – well, really Frau Teresie Kropaczek because she spoke German and almost no Czech, despite her utterly Czech surname (Kropáček means a little watering can) – was poor but as you can see, she was rather attractive. She normally worked as a maid in better houses (like my paternal grandmother before communism). Well, one slight problem was that she was born in August 1813 so in 1849, she was 36.

In 1849, the new emperor was 19 and was the guru of the Austrian Empire for one year. At any rate, he just happened to spend time in the town of Hodonín in June 1849. He was negotiating with the Russian military what's the best way to help some Hungarian rebels. Something else happens in June 1849, or not. He returns to Hodonín in December 1849. In some other diaries, and I still don't understand where, they found the following note written by the emperor in late 1849:

When you expand the acronym, it says "Kropaczek erledigt" or "[the case] Kropáček is solved". Why would this Czech surname appeare in his notes at all? Clearly, the theory is that he met the pregnant Ms Tereza Kropáčková – 6 months into her pregnancy – and made some administrative arrangements that secured her and her family financially which is what the word "solved" means. So Mr Josef Masaryk, Tereza's husband since August 1849 (she was getting married about 2 months into her pregnancy), was also upgraded from a laborer to a coach driver, a big improvement from his previous job, and additional promotions were waiting.

Ms Tereza Kropáčková and her husband had 5 kids in total – four of them were sons. (Well, decades earlier, Tereza Kropáčková also had an out-of-wedlock baby when she was 20 and it died when it was 4 months old.) TGM, the later president of Czechoslovakia, was the oldest among them. And the younger brothers looked different and they just didn't look like the same kind of achievers.

Thomas Masaryk and Francis Joseph I at a younger, but the same, age

An impressive detail is that some investigators have even found the name of the likely human link connecting the emperor with Ms Kropáčková before the hypothetical intercourse. It was probably Mr Emanuel Malý, an ambitious and courageous employee of the Internal Revenue Service in Hodonín who has been shown to have met the emperor – and whose "Důchodenský" [related to pensions] house (that used to stand somewhere here) was visited by Ms Kropáčková.

That's where the hypothetical intercourse could have taken place.

One of the investigators who was trying to validate the theory wanted to compare some DNA samples. He needed the DNA of some descendants of Masaryk. A TGM's great granddaughter Ms Charlotta Kotíková who lives in the U.S. (top curator at a visual arts museum in Brooklyn, NY) has assertively refused to be a part of it. She thinks it's "immoral" to investigate the history because "an ordinary boy from Moravia may also make big things". Isn't she almost certain that she's a relative of the Hapsburg House? Concerning the statement, it's possible for the son of a poor laborer to become a founder-president of a new country but it's more likely for an aristocrat to achieve such things, I think. ;-)

Some other sources mention that Francis Joseph I could have supported Masaryk's family but also many other Czech things, such as the reconstruction of the Karlštejn Castle (that would turn into ruins without it), rebuilding of the National Theater after a big fire (although the Czech legend says that the money for the national theater was always collected from poor peasants) etc.

You know, I am not certain and I think you can't feel certain after having read this sketch, either. 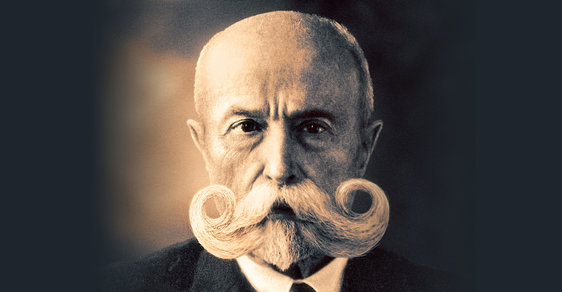 But the evidence seems to be multi-dimensional and rather strong and yes, the theory itself is very juicy. It's like the possibility that Jesus Christ was the son e.g. of King Herod. Or George Washington could have been a son of King George III of Britain and Ireland. And so on. In the Czech case, it seems to make much more sense than in the "analogies" I mentioned.

Masaryk has always been said to look and behave as an aristocrat. He could have been the biological son of the highest aristocrat among all. Masaryk had the offices at the Prague Castle, the headquarters of the Czech kings. Shared genes could make the Austrian-Czechoslovak continuity look much more natural. When Austria-Hungary dissolved, maybe the portraits of the monarch in each classroom were simply replaced with his son. ;-)

Note that the emperor isn't the only one who was said to be daddy Masaryk's biological daddy. During the anti-Semitic Hilsner Affair in 1899 – when Masaryk defended the Jewish suspect – people were saying that his biological father was Nathan Redlich, a local Hodonín-based rich Jewish farmer. But the Francis Joseph I theory looks much more justified to me.


Update: I was looking for pages about DNA reconstructions of ancestors and incredibly enough, the first one I found was this page about a self-described illegitimate great grandson of the very same Francis Joseph I. ;-) The DNA test concluded that "it could have been him". So there's some uncertainty, and there would probably be in this case, too, but the probability that Francis Joseph I was "active" in similar ways has increased, and this arguably increases the answer "Yes" for Masaryk as well.
Luboš Motl v 8:53 AM
Share