Let me write a short blog post by a linker, not a thinker:


The strange acronym T2K stands for Tokai to Kamioka. So the T2K experiment is located in Japan but the collaboration is heavily multi-national. It works much like the older K2K, KEK to Kamioka. Indeed, it's no coincidence that Kamioka sounds like Kamiokande. Average Japanese people probably tend to know the former, average physicists tend to know the latter. ;-) 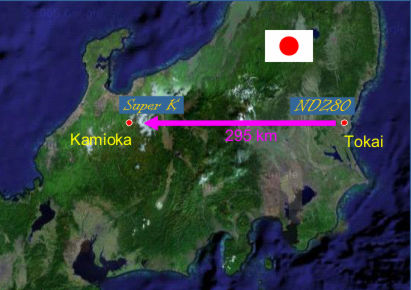 Dear physicists, Kamiokande was named after Kamioka, not vice versa! ;-)

Muon neutrinos are created at the source.


These muon neutrinos go under ground through 295 kilometers of rock and they have the opportunity to change themselves into electron neutrinos.

In 2011, T2K claimed evidence for neutrino oscillations powered by \(\theta_{13}\), the last and least "usual" real angle in the mixing matrix. In Summer 2017, we still believe that this angle is nonzero, like the other two, \(12,23\), and F-theory, a version of string theory, had predicted its approximate magnitude rather correctly.

In 2013, they found more than 7-sigma evidence for electron-muon neutrino oscillations and received a Breakthrough Prize for that.

But we know that the CP-symmetry is also broken by elementary particles in Nature – even though the spectrum of known particles and their allowed polarizations doesn't make this breaking unavoidable. The only experimentally confirmed source of CP-violation we know is the complex phase in the CKM matrix describing the relationship between upper-type and lower-type quark mass eigenstates.

Well, T2K has done some measurement and they have found some two-sigma evidence – deviation from the CP-symmetric predictions – supporting the claim that a similar CP-violating phase \(\delta_{CP}\), or another CP-violating effect, is nonzero even in the neutrino sector. So if it's true, the neutrinos' masses are qualitatively analogous to the quark masses. They have all the twists and phases and violations of naive symmetries that are allowed by the basic consistency.

Needless to say, the two-sigma evidence is very weak. Most such "weak caricatures of a discovery" eventually turn out to be coincidences and flukes. If they managed to collect 10 times more data and the two-sigma deviation would really follow from a real effect, a symmetry breaking, then it would be likely enough to discover the CP-violation in the neutrino sector at 5 sigma – which is considered sufficient evidence for experimental physicists to brag, get drunk, scream "discovery, discovery", accept a prize, and get drunk again (note that the 5-sigma process has 5 stages).

Ivan Mládek, Japanese [people] in [Czech town of] Jablonec, "Japonci v Jablonci". Japanese men are walking through a Jablonec bijou exhibition and buying corals for the government and the king. The girl sees that one of them has a crush on her. He gives her corals and she's immediately his. I don't understand it, you, my Japanese boy, even though you are not a man of Jablonec, I will bring you home. I will feed you nicely, to turn you into a man, and I won't let you leave to any Japan after that again. Visual arts by fifth-graders.

So while I think that most two-sigma claims ultimately fade away, this particular candidate for a discovery sounds mundane enough so that it could be true and 2 sigma could be enough for you to believe it is true. Theoretically speaking, there is no good reason to think that the complex phase should be absent in the neutrino sector. If quarks and leptons differ in such aspects, I think that neutrinos tend to have larger and more generic angles than the quarks, not vice versa.
Luboš Motl v 7:08 PM
Share