The Trump presidency that most of the American voters celebrated after the 2016 election is dead, Steve Bannon said. Well, parts of it look dead but thankfully, there are other parts the look alive and kicking to me. 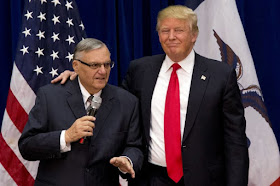 And some judges have issued verdicts with these ludicrous statements, too.

Even after the November 2016 election won by those who are largely convinced that Arpaio was doing the right thing, some posthumous children of the Obama presidency among the judges were working hard to make life complicated for Mr Arpaio. He was charged with "contempt of court" – a typical type of crime that is easily abused by politically motivated fake trials (the name of the crime surely sounds like "the judge doesn't like you") – and he was expected to be sentenced to 6 months in prison plus fines.


It's absolutely ludicrous for an old man who has been defending the law for decades and who hasn't done anything that would be agreed by most Americans to be wrong to be harassed in this way. So it just can't be shocking that his soulmate Donald Trump did plan to pardon Arpaio and finally pardoned Arpaio.

Folks at Breitbart and elsewhere are happy. Many fanatical leftists are hysterical.


The reaction I found most stunning was one by Noah Feldman,


not only because I know Feldman very well. He was my fellow Fellow in the Harvard Society of Fellows. At that time, after 2001, his main job was to help the Iraqi whose country was intervened by George W. Bush to write their new constitution. Well, he more or less did it himself, we were told. It may have looked ironic for a leftist like Feldman to work for George W. Bush but with hindsight, it no longer looks so paradoxical to me.

Feldman wrote his critique preemptively, before Trump actually pardoned Arpaio. This fact indicates that even Feldman himself realizes that the pardon was way too natural, justified, and should have been expected. Feldman repeats that this is enough for impeachment because Trump himself "assaulted the federal judiciary, the Constitution, and the rule of law itself".

Noah, give me a break with this breathtaking and incredibly arrogantly articulated crap.

First, is Trump assaulting the Constitution? Why don't you read its Article Two? Clause 1 says:


The President shall be Commander [...] and he shall have Power to grant Reprieves and Pardons for Offenses against the United States, except in Cases of Impeachment.


Was Arpaio's case a case of impeachment? No, it wasn't. Does the Constitution say that Trump has power to grant pardons for offenses against the federal courts that Arpaio had "contempt for"? Yes, it does. The Constitution says exactly that. Now, Mr Feldman, tell me which word you fail to understand. Feldman is either dishonest and is trying to twist the laws he knows. Or he is absolutely unfamiliar with Constitution 101.

Trump's pardon for Joe Arpaio is a textbook example of a pardon that the founding fathers had in mind. The pardon was incorporated as an extra tool to reverse decisions that are partially driven by angry mobs, that haven't really defined what the crime is supposed to be, and that are too cruel given the age or other characteristics of the defendant.

Whether you like to admit it or not, Joe Arpaio was being prepared to become a political prisoner in the United States of America. As a sheriff, he was enforcing the law as he understood it – and as a majority of Americans understand it today, as we know. And there may have been people whose understanding of the immigration laws was different. But Arpaio was simply acting in agreement with an interpretation of the Constitution and the laws that a politically relevant fraction if not a majority of Americans share. So if someone punishes him for this interpretation of the Constitution in a politically sensitive context, then he punishes him for his political opinion. About one-half of the Americans share this opinion so they could be charged with the same "crimes".

This is exactly what the category of political prisoners is all about.

Despite the fact that the U.S. citizenry may be split about this fact, judges and the president must still decide in one way or another. Some judges decided that the illegal immigration should be encouraged by extra hurdles placed in front of sheriffs and other law enforcement officials and they charged Arpaio with a crime. On the other hand, the U.S. President – whose power to grant pardons makes him a supreme court of his own kind – arrived to the opposite conclusion. What could you possibly criticize about this situation? The U.S. president and his power to grant pardons was incorporated to the Constitution as the ultimate safeguard in situations similar to this one.

But I am primarily disgusted by Feldman's words that "Trump has attacked the rule of law in the U.S. itself". What? The pardon for Arpaio is surely a middle finger for a certain clique of judges and other activists who loved to imagine that they're omnipotent but they're not and they're not the same thing as the rule of law. In fact, they're much closer to the rule of lawlessness.

The number of illegal immigrants in the U.S. is estimated to be comparable to 10 million folks. The precise number isn't known and cannot be known, for obvious reasons. But the number is clearly huge. These are people who would simply not be located at the U.S. territory if the rule of law were perfectly effective.

This huge number is clearly a failure of the rule of law. The likes of Arpaio have worked hard to make the law enforcement more effective. And their enemies – looking for excuses why you can't do anything against this or that illegal immigrant or any illegal immigrant – have been obviously working to make the law even less effective. So who has been attacking the rule of law in the U.S.? Where does Mr Feldman find so much arrogance to state this exact opposite of the truth and even write it as a Bloomberg article? Or even try to suggest that this absolutely standard and right decision by Trump could become a justification for impeachment? I won't honor this claim by a special reply because I think that Feldman must have been high.

After the Obama years in which the violations of the law needed to "nurture" illegal immigration had a powerful ally in the White House, the situation is getting normalized. But many places have become insane and the rule of law was turned upside down. Harvard has become a great example of these hotbeds of crime. Half a year ago, the Harvard Crimson published the article Get Over It where the illegal immigrant Ms Laura S. Veira-Ramirez attacks an American lady in the train – just because the lady wasn't quite happy with the loud conversation in Spanish that was taking place in between these illegal immigrants who were just going to a far left meeting – that even the holders of most U.S. visas aren't really allowed to attend. Veira-Ramirez even claimed that she wouldn't allow someone like Donald Trump to become the U.S. president.

Try to appreciate how insane the atmosphere at Harvard has become. She is an illegal immigrant. She should have been caught and placed in a detention facility within hours and deported during days. At the U.S. territory, she has absolutely no business to speak her native tongue, attend political rallies, or decide who will be the U.S. president. She has no right to be there at all. Instead, she not only feels safe. She was allowed to become a student at a school that rejects 95% of the applicants; every imperfection is enough for you to be refused by Harvard but your being a criminal is apparently not a problem at all. She was also allowed to write a rant for the main journal published by the Harvard students where she placed her rights in the U.S. above those of the U.S. citizens such as Trump's voters. She apparently believes that it's people like herself, not the U.S. lady in the train who was unhappy, who should be choosing the U.S. president.

This is a stunning example of a contempt for the rule of law in the U.S.

You have reached the wrong answers to all these fundamental questions, Mr Feldman.

Joe Arpaio is an American hero. Some people also wanted him to become a political prisoner but the Trump presidency is sufficiently alive so that this evil dream couldn't come true. Get over it.