Czech ex-president Václav Klaus was visiting Nuremberg, Bavaria, where (an uncle of mine lived from 1980 and where) Klaus supported the Alternative for Germany (AfD) before the parliamentary election where they're expected to get 9-10 percent. 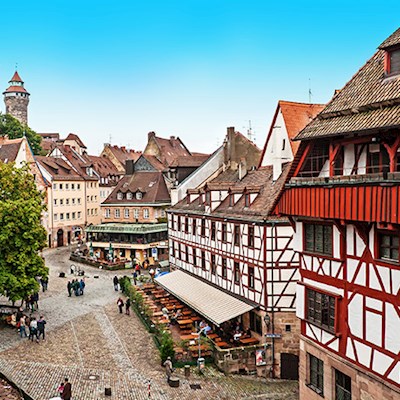 The city hall wanted to ban the event because of the presence of an AfD boss who had previously said that Germany should get rid of a PC politician. Klaus' support for AfD was criticized by the boss of the Sudeten German Patriotic Organization Mr Bernd Posselt, affectionately known as "a Hitler who returned from a fattening station" (a nickname invented by the current Czech president Zeman). Posselt said that Klaus and AfD hate the EU and it's bad.

As you can read on German Google News, Klaus responded, on the contrary, Sir. AfD – representing a fraction of Germans who have been silenced – and he are doing what they're doing because of their love towards Europe, its traditions, and its future.

On Tuesday, one day before the marathon that stripped Mr Babiš of his immunity, the Czech Parliament approved the Paris Agreement and Czechia became the last EU member state that ultimately surrendered and ratified this unwise treaty-non-treaty. (The Wikipedia map still shows an optimistic state of affairs when we're "green" like Switzerland, but we no longer are.)


I completely understand where Klaus is coming from. The fearmongers have basically conquered almost all the official organizations in Europe, with "all the negative consequences for freedom and prosperity", as Klaus has put it. The Czech public is highly skeptical towards the climate hysteria but even the Czech parliament was largely hijacked by the hysterical activists and cataclysmic scammers. It was only ODS, the Civic Democratic Party that Klaus founded around 1992 and divorced a decade ago, that was working hard to delay and stop the ratification of the Paris Agreement.

You must understand that Klaus doesn't love ODS too much these days. It's obviously too centrist, too silent, too moderate etc. But his son, Václav Klaus Jr, is active in the party, many folks are doing good things there, and I think that Klaus should praise the ODS' behavior vis-a-vis the Paris Agreement proceedings – which were completely reasonable, I think. Unfortunately, ODS is a small fraction of the Czech Parliament and things won't get better.

So while I agree with Klaus that in the big political game in Europe, the skeptics have lost, I think that I should respect that the community of the readers of this blog is global and 1/2 of the TRF readers are American. Well, I believe that the climate skeptics haven't lost the debate in the U.S. The skeptics are winning – and maybe even banning the phrase "climate change" in various departments ;-) – so the situation in the U.S. may be the opposite one in comparison with Europe and the average situation in the world, as weighted by the TRF readers' locations, is therefore "neutral".

Also, one should realize that the Czech public is mostly skeptical on the climate. You can see it e.g. in the discussion under the article about Klaus' climate comments in Bavaria. The political representatives of Czechia are far more pro-alarmist than the populace. This gap is possible largely because the climate issue hasn't really become an important political topic in Czechia – and elsewhere (yet?).

Hotter sea = greater temp difference between sea and space = more energy for hurricanes = higher velocity winds. This reality is a US taboo. https://t.co/8HnUjcKcUP

It sounds persuasive but if you think quantitatively, it's wrong. Indeed, the Earth-space temperature difference is going up if the surface is warming due to the greenhouse effect. But what's also changing is the height of the tropopause – the upper boundary of the troposphere, the region of the atmosphere that circulates and where the temperature drops as you go higher. In fact, the lapse rate – the decrease of temperature per one kilometer of troposphere – stays the same, regardless of the surface temperature.

So the higher temperature difference and corresponding energy per squared kilometer of surface that this difference may help to create is divided over a "thicker atmosphere" if the surface temperature goes faster, and therefore the wind energy per unit volume stays the same in the first approximation.

Even if you forgot that the atmosphere gets thicker in the aforementioned sense, the changes caused by the global warming would be tiny. The top of the tropopause is almost 100 °C colder than the surface. So if the surface warms by one degree Celsius, it would make all these differences different just by one percent, and given the big statistical fluctuations and low frequency of hurricanes, such a tiny change would remain unmeasurable for decades or centuries.


By the way, in a video discussion between Klaus and Robejšek, the chairman of a new and so far small "Realists" party, national interests were discussed. Klaus stated that to be in the "hard core of the European Union" is equivalent to become a satellite of Germany if not a part of Germany.


Germany's Frankfurter Allgemeine Zeitung just published an incredible story saying that the EU's Islamofascists – they use a different term – will demand a whopping EUR 60,000 for every Muslim migrant who is rejected by an EU member state. That's a big and fair amount to cover all short-term expenses for these people.

But do we want it? Needless to say, our position will be not to pay a penny and not to accept a migrant. But if the EU's Islamofascists were able to force us to pay, would it better to pay? I surely think so. The supply of these migrants is basically limitless so by becoming a part of this system, we could easily accept 2 million migrants per Czechia – whose current population is 10.5 million. But above 2 million migrants, the path towards the complete takeover of our country would arguably be unstoppable.

On the other hand, 60 000 times 2 million is 120 billion – and 120 billion euros are exactly the currency reserves of the Czech National Bank, 17th largest in the world. So we may save the country just by paying these abstract reserves. I would surely prefer that. Using some proportionality of the threats and damages, that's why I would prefer to pay the money for a hopefully smaller number of these migrants, too. When the money get too big, the opposition towards the EU will be too strong and we will leave the EU. It's that simple.

Aside from the terrifying ransom itself, what I find stunning about the FAZ article is that they don't even tell you who has really invented or proposed the ransom. They write it negatively, universally, as if it were a fact. This is a typical way of doing things in a totalitarian society.


Another absolute insanity was voiced by Thomas de Maiziere, Germany's interior minister. All EU member states should pay the same salary for no work to the illegal Muslim migrants because, as he correctly observed, those go to Germany because Germany pays a lot.

No apologies, cheap German fascist idiot, but it won't work. These people are basically criminals here. When an illegal immigrant is caught, he or she is moved to a detention facility, a form of prison, where he has to pay for his food and housing, some €10 per day. If masses were trying to get to our country, they would be moved to these prisons, too. If those got full, we would have to increase the defense of the borders. If it were impossible to keep them outside out territory peacefully, the enforcement forces would be ordered to shoot them dead, and if a German would-be leader would like to breach these self-evident laws and intervene into our vital internal affairs, he would have to be assassinated like it's 1942.

If you vote for idiotic politicians who have invited these people and if you pay them as if they were gems, it's your problem. We haven't made any similar lethal mistake, we're not making any similarly brutal mistake now, we won't abandon our existential laws that protect the integrity of our country, and we won't pay you a Pfennig to suggest that we're on the same multicultural ship of loons as you are, because we are not, German aßholes.

If Germany – with the same breathtaking arrogance and overreach that we have already seen in the course of history – throws Europe into another world war for the third time, we will probably agree that "thrice was enough" and expel the Germans out of the continent, perhaps to the Arabian peninsula.
Luboš Motl v 9:08 AM
Share