Last time when I talked about the Lidl discount supermarket chain – which should be opening its first shops in the U.S. now – it was about the Czechs' legitimate preference of models that look like us.†﻿ 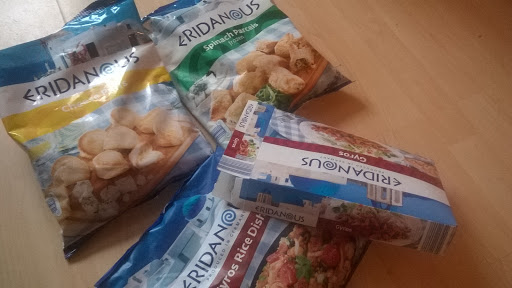 Well, it's a Greek Week in Lidl right now. The next week is the Bombshell Prices Week. See the Lidl fliers. I like these events so among other things, I bought four frozen packages of Eridanous food. It's a brand that belongs to Lidl, the products are made in Germany, but otherwise they're supposed to look perfectly Greek.†﻿


I thought that everything was fine about these packages. ✞﻿✞﻿✞﻿ Well, I clearly didn't look carefully enough.†﻿ 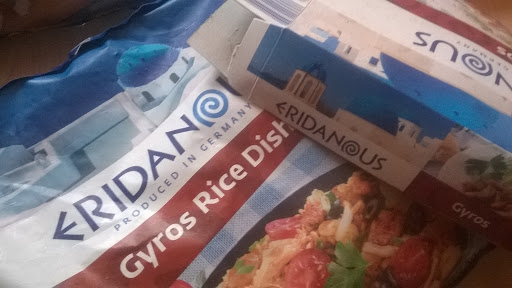 Without the media such as Breitbart.com, Greek Reporter, and assorted Czech dailies and outlets, I would have been deceived.†﻿

My vigilance wasn't sufficient in spite of the fact that every single page among the first 8 pages of the Greek Week flier (which I have looked at) contains this problem several times.†﻿

Later, I learned that the crosses were still present at the packages in 2013, they began to disappear in 2014, but I hadn't noticed for 3 years... ✞﻿ Well, in 2013, packages e.g. yogurts had no crosses while the big photos at fliers had crosses... ✞✞✞


You should study the Orthodox churches in Santorini, Greece, these fun structures with blue roofs. What do you expect from a church – as opposed to the headquarters of George Soros' NGO, for example? Yes, you should have said "a cross".†﻿†﻿†﻿

These bastards at Lidl have photoshopped the crosses away in order to be "religion neutral" and "respectful to diversity". Wow. Thankfully, around 90% of consumers in Belgium disagreed with this explanation. When Czechs like me were finally pointed out that we became victims of this scandal, the anger in the atheist Czechia has vastly beaten that in Belgium or any other country, of course. ;-) The dissatisfaction with Lidl's decision is at about 95% among Czechs.†﻿

Would you also remove the star of David from Pilsen's synagogue?†﻿

The claim that the removal of Christian symbols follows from their "respect for diversity" is quite some chutzpah – or Orwellian newspeak, indeed. Did the gas chambers represent the German respect for life and other ethnic groups?†﻿

Folks at Lidl: Are you serious that this desecration is how you imagine "religious neutrality"? There are 362 churches on the Santorini caldera. Every single one is white, every single one has a blue dome, and every single one has a cross on top of it. These buildings were built by Christians and have belonged to Christians for many centuries. The churches were built between 11th and 19th century. Spiritually, almost all of Greece "belongs" to Christianity in the same way in which the supermarkets with "Lidl" belong to the company named Lidl. In other words, your move was as "religion neutral" as squatters' occupying your supermarkets would be "business neutral". Neutrality doesn't mean that one can destroy or arbitrarily confiscate other people's assets and symbols, does it?†﻿ 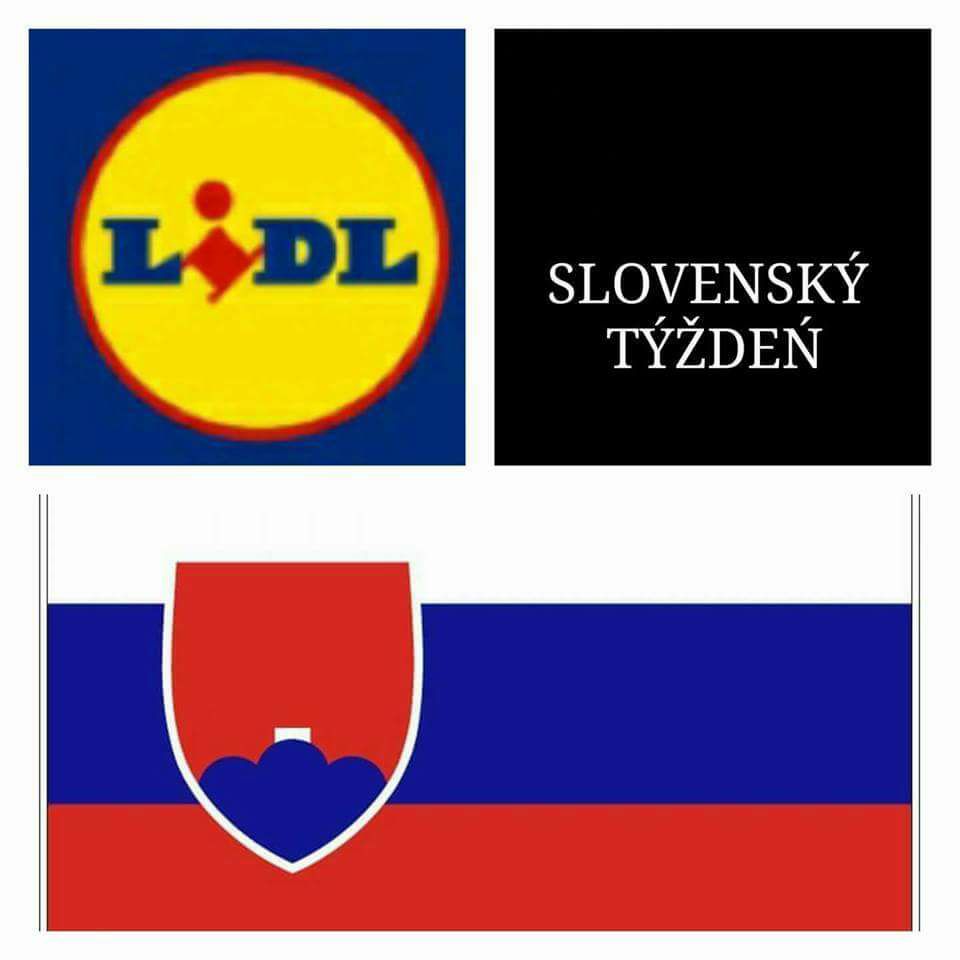 So when you actively photoshopped these crosses away, you're not being religiously neutral. You're acting as fanatical warriors against the truth, against the history, against the European civilization, and against Christianity. You're almost on par with the Islamic terrorists.†﻿

Well, I will surely not boycott Lidl because of that – although the forums are full of this claim. I believe that most Czech employees of the chain agree with me, anyway. Here's an example of a moderate comment, the most upvoted comment at iDNES.cz, 429 positive votes and 0 negative ones:†﻿

My head just can't comprehend that. They take a picture of a church but, in order for it not to look like a church, do they "erase" a cross on its roof?†﻿

When I don't want to have a church on the photo, I can take a picture of something that is not a church, right? I really don't understand it.


Mr Jakub Kos [Mr James Blackbird], 377+/1–
This must already be a deviation or a disease. This behavior already lacks any common sense.\[

\] Mr Radim Holík [Mr Iadvise Caneman], 300+/1–
Tearing down of statues, erasure of crosses... When will the people finally understand that we should primarily draw lessons from the history instead of trying to distort it let alone erase it? 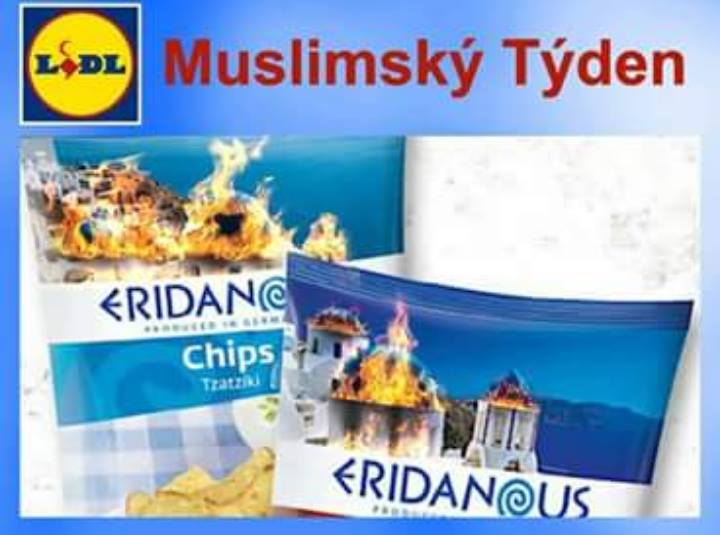 A Muslim week at Lidl. 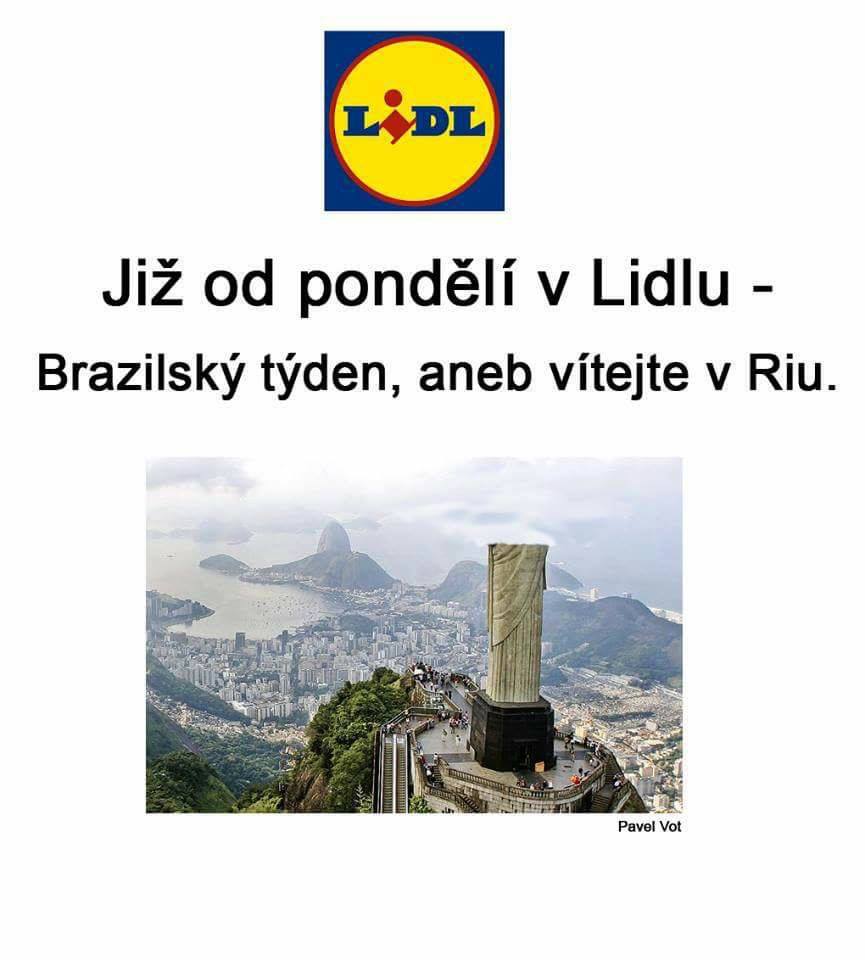 Welcome to Rio. The Brazilian week at Lidl.

Picture via Czech minister of agriculture who told consumers to "consider" a boycott against Lidl. 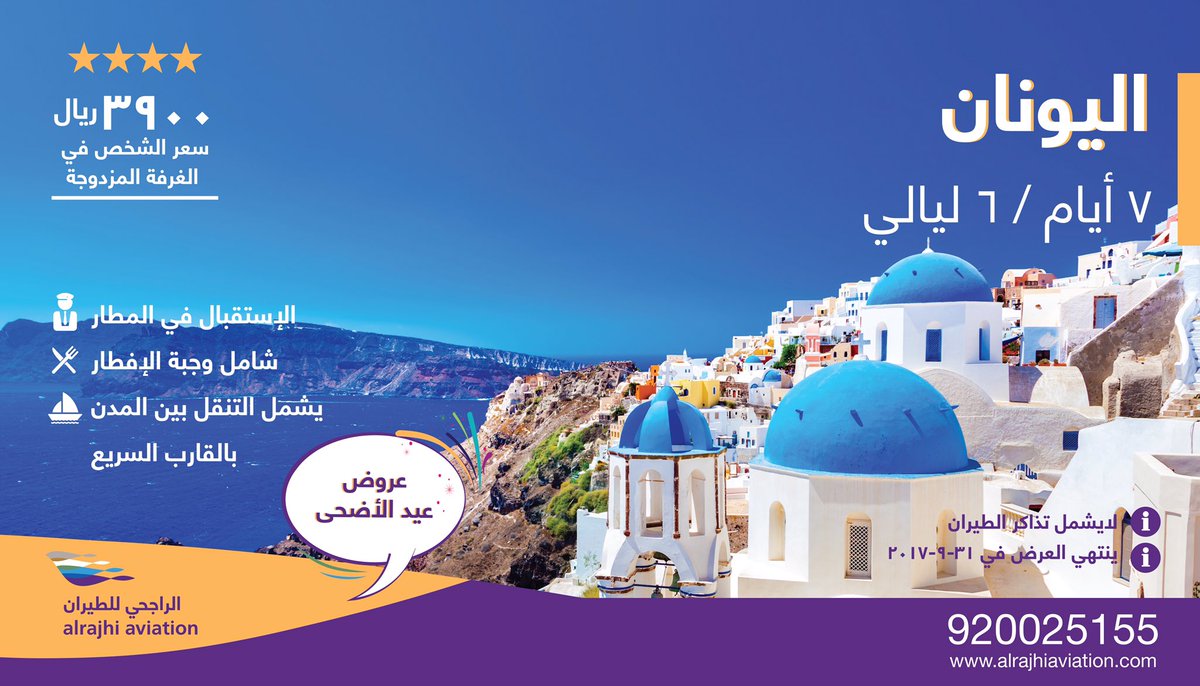 Saudi Arabian companies (travel agencies) are apparently more tolerant towards crosses than the German ones. Do the Germans plan to surpass the Saudis in the stoning to death, too? Via Helen de Zeus.†﻿

Lidl has many competitors in Czechia, e.g. Mein Kaufland. "Are you collecting the little points?" Jokes like that arose after a female clerk with a tattoo of a swastika and a hailing man was photographed in the shop.†﻿\[

\] Even if I don't believe... well, almost any information that could be extracted from the Holy Scripture, I still see that the crosses play a very important role for the depth of the picture below: