Mr Juncker, Czechia won't leave the EU because of cocoa in chocolate

North Korea's Kim III has promised to place his country's military on par with the U.S. Good luck with that, comrade. Meanwhile, a similarly ambitious leader, Jean-Claude Juncker, the general secretary of the commissars of the European Soviet, gave his "State of the Union address", probably in order to claim that this unelected drunk clown is on par with the U.S. president.

He also mentioned my country, Czechia, once in his speech. It was about the double "standards" of food products in the post-communist and old EU member states. Slovaks and Hungarians should have the same high meat content in some products while the Czechs should have as much cocoa in the chocolate as others.

I have always disagreed with the hysteria exactly because this hysteria contradicts the national idiosyncrasies, the rules of the free market, and it's an ideal "cause" for clowns such as Juncker to become more important. To violently unify and centralize Europe, it's exactly what similar politicians want to do and what they want to be paid for. So I totally expected that Juncker would become a warrior-in-chief against the "double standards in the quality of food".

There exists a small percentage of packages whose content is different e.g. in Czechia and Austria. I believe that it's not about an unambiguously lower quality in the post-communist world. In particular, I do believe that we Czechs actually prefer meat-like products that contain a higher fraction of fat and meat that isn't just the ordinary protein-based muscle, perhaps including some grounded skin, organs, if not parts of bones. It tastes more yummy. Our nation may be genetically predisposed to eat such food because our ancestors, maids and stableboys working for a German farmer (if I simplify things), have gotten used to such food. We may also prefer weaker spices, more milk-like and less bitter taste of chocolate, and many other things. At any rate, if products obey health standards and they are sold well, no one should be allowed to prevent the food companies and their consumers from the mutually agreed purchases.


At the same moment, I don't claim that everyone agrees with me. Some people in Southern Bohemia whom I know literally drive their cars to Austria in order to buy their food over there. I don't know whether it's really about the taste or about their image. And some Czech politicians also think that it's a good topic for them to collect new voters. I must praise those politicians who refuse this cheap campaign, e.g. those from the new right-wing Realists' Party.


Pavel Ryska, a financial analyst at a bank whom I know from Twitter, compared this part of Juncker's speech to the legendary talk by Miloš Jakeš, the last boss of the Czechoslovak Communist Party during communism (but he wasn't the president, Slovak-born Gustáv Husák kept that job), in Červený Hrádek [Little Red Castle] near Pilsen [ČH is a village but it formally belongs to Pilsen today] in July 1989, four months before the Velvet Revolution began. He spoke to a selection of top local communists in Western Bohemia. The video recording was leaked illegally.


1989: Jakeš meditates about rabbits [and] boilers/broilers [Jakeš famously confused these two words], and the socialist Czechoslovakia has run out of yoghurt.
2017: Juncker gives a talk about cocoa in chocolate while Czechia is running out of butter.


Exactly. These people are detached from reality. Someone could have mentioned cocoa in chocolate but no one really cares. What people care much more about in the supermarkets is the price of the butter which has jumped by over 60% in a year for various reasons and further increases are expected before Christmas. So if Juncker wanted to please those who buy things in Czech supermarkets, he would outline a program to tame the rise of the butter prices. Everyone is just OK with lower cocoa in [some] chocolate.

But neither cocoa nor butter are really the primary topics that define the Czechs' relationship to the European Union. Czechia is the most likely country to follow in the footsteps of Brexit, and organize its own Czechout, and it won't be because of any cocoa or butter. Such tension and potential big changes are much more likely to be sparked by the big political questions such as the EU's assault on the basic sovereignty of Czechia, common sense in Central Europe, and the plans to force Islamization upon our country, among related things.

Juncker – just like most of his EU comrades, I guess – lives in a complete denial of this basic reality, of the big political questions that actually matter. 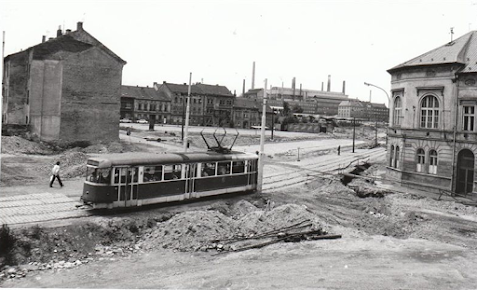 I believe that this picture of Pilsen was taken in the 1980s and I safely remember when it looked like this. The chimneys belong to Škoda Works – then The Plants of Vladimir Ilyich Lenin – and the empty space is where the U.S. Air Force bombed the director building of Škoda in 1945, weeks before the war ended in Europe. Except that the war-like conditions were recreated again in the 1980s! Compare the appearance with the current conditions.

In Summer 1989, Czechoslovakia's communist leader spoke about mundane things in his famous "lonely fence post" (that's how he called himself and the rest of the communist leadership) speech. As a teenager, I got a copy of his hilarious speech just weeks after he gave it. I mostly memorized it (the justification was "look how stupid the top commie is" – well, with hindsight, I think that I've seen comparably stupid and less articulate people during democracy, too) and I can still reproduce many huge passages of it. Incidentally, the speech was given in the cultural hall of the local JZD (collectivized farm) and our high school class had the maturity (final high school exam) ball in the very same room in Spring 1992.

Four months after Jakeš's speech in which he was speaking about chickens, "clever" ways to restrict Havel and the other dissidents, and about top singers who signed an anti-communist petition at that time – he used familiar words as if he were their close friend – the students protested against censorship, lack of freedom, and other "big topics" and the communism began to crumble. Is it possible that four months after Juncker's ludicrous talk about cocoa in chocolate, the European Union will begin to collapse – because of the big things that actually matter?
Luboš Motl v 6:53 PM
Share