Catalonia, Czechia: not too happy a day in politics

In Madrid, the Spanish government decided to say "you're fired" to the elected Catalan government and appoint a puppet government instead. Based on the parties that will be included, the puppet government is supported by 8% of the Catalan voters. Moreover, some "authorities" are threatening Catalan president Puigdemont with up to 30 years in prison for "rebellion". He's my hero. Tonight, he will make a speech. I will understand if he surrenders.

Clearly, Spain doesn't belong to the European civilization and their heavy-handed approach won't make the problem go away. They can mask it but the underlying tension and desires to be independent will strengthen. I don't understand whether they want to allow new democratic elections in Catalonia because the support for pro-independence parties is bound to strengthen. 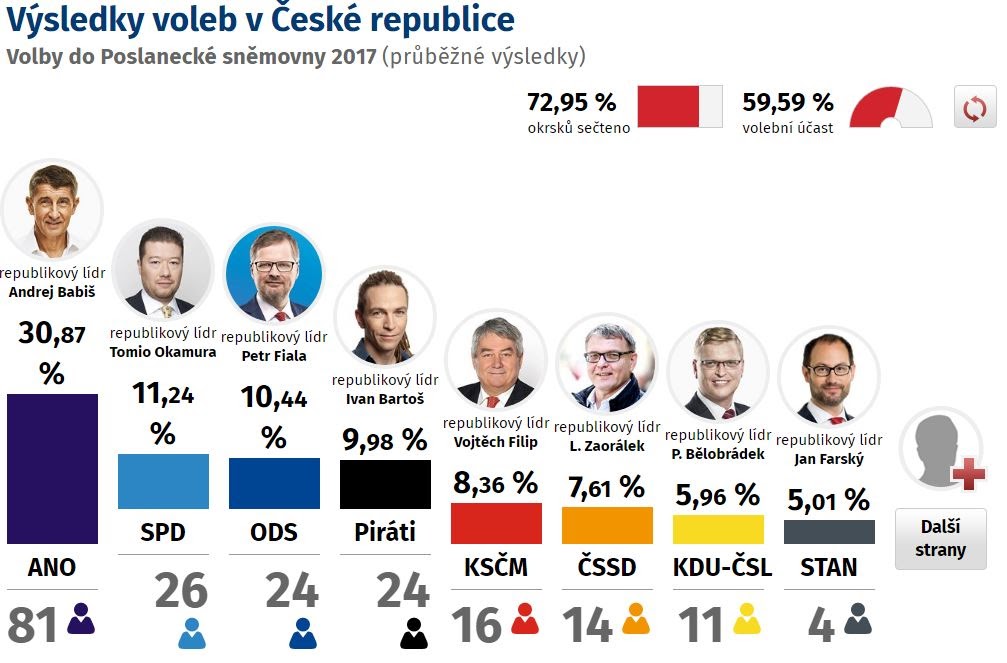 Results after 73% of polling stations have reported their tallies (in Czechia, we only need 2 hours for that counting – most other nations should learn from us). At the end, not only STAN mayors with 5.2% but also TOP 09 with 5.3% made it.

Meanwhile, billionaire Babiš exceeded the expectations and won the Parliamentary elections in Czechia.


At the turnout of 60.83%, billionaire and former Slovak communist snitch Andrej Babiš (who received his charges from the police weeks ago, because of one of his numerous frauds) and his non-ideological party – building on primitive populism articulated in the language of the uneducated, basically brain-dead, masses – got 29.6% of votes.

Right-wing, Eurocautious, but "mainstream" enough ODS that I voted for (and so did its founder, ex-president Klaus, because he was finally persuaded by his son's candidacy – Klaus Jr is the only well-known defender of a straight Czexit in current ODS and one might argue that Klaus Sr was actually the only true Euroskeptic in ODS when he led it, too) got 11.3% and became a silver medal winner, almost tied with SPD. Very far from the times when it was a dominant party (with 35%) under Klaus, however. On the other hand, ODS could have easily been the 5th party in the leaderboard so the silver is a silver lining for me.

The "multicultural fascists" SPD of Tomio Okamura, half-Czech, half-Japanese, got 10.6%. They dropped to the potato medal (fourth place) after a more promising beginning of the counting when they were second ahead of ODS.


Pirates, a new protest party of the youth and IT geeks, got over 10.8% as well, a statistical tie with SPD (the preliminary results looked a bit worse). They got the bronze medal.

Communists dropped from previous elections (14% has been normal) and earned less than 8%. Lots of the communist voters were obviously devoured by the former communist apparatchik, billionaire Babiš, of course, because he is trying to return the habits of the communist era much more aggressively than the communists. Communists, despite their heritage, because a somewhat intellectual party, somewhat pro-Parliamentarian-establishment etc. Babiš is anti-Parliament and anti-intellectual. And some of the old communist voters may have just died, something that some of us have been expecting for 25+ years.

The result of the following parties is absolutely catastrophic and I feel terrified even though I would never consider myself a real supporter of either of them. Social democrats – winners of the previous elections in 2013 with over 20% – got less than 7.5% (note that this 8% will be the only group of lawmakers that wants to adopt the Euro in Czechia!), Christian Democrats less than 6% (it's the only Czech party that considers Christianity important!), STAN mayors stand at 5.2%, near the fatal threshold (they finally got into the Parliament), and the only "globalist" PC pro-EU but conservative party, TOP 09, seemed to have less than 4% and remained outside the Parliament (in the final stages of counting, they climbed from 3.8% towards 5.3% and they made it, lots of good luck, indeed). Greens, Mach's SSO libertarians, Realists, and others are around 1.5% or less.

TOP 09 has some political heavyweights such as the leader Miroslav Kalousek – a true Parliamentary veteran – who won't get to the Parliament again. In some Twitter exchanges, I have warned him to avoid the fanatically pro-EU campaign etc. It was surely one of the reasons his party was "nearly" eliminated. Aside from the good luck that allowed them to stay in the Parliament, they may be happy that they won the elections outside Czechia – in those global stations, they got some 23% of votes, followed by the Pirates at 18% (I guess lots of these votes were cast on the beaches of Somalia).

Lots of the voters moved to Babiš's ANO. Some of the young people who used to vote for TOP 09 moved to the Pirates. Everyone else has suffered a big deal. ODS that I voted for is the only party with some "history" that achieved a "stable result" relatively to 2013.

The nominal winner of the elections Babiš will almost certainly need a coalition partner and his coalition potential is low because almost everybody said that they don't want to create a government with someone who is prosecuted by the police and expects 10 years in prison for frauds.

But he may easily bribe someone – that's how he has dealt with problems throughout his life. However, President Zeman has announced that he won't be in a hurry when he's expected to appoint a candidate prime minister. Zeman may wait for Babiš to be arrested – before a clear coalition, it's likely that the new Parliament will strip him of his immunity again – and then he may offer a pardon and the chair of the prime minister to Babiš who will be arrested in exchange for 50% of his company – for some 2 billion dollars plus a guarantee that Babiš will do everything to make Zeman reelected as the president. ;-)

I think that I am mostly kidding now but I am not 100% sure it's just a joke. ;-) Zeman is a good enough political chess player, I think, and his apparent "alliance" with Babiš in recent years is almost certainly just a strategic move, not a reflection of some deeply felt love in Zeman's heart. :-)

The three parties widely considered non-democratic, namely ANO, communists, and Okamura's SPD, will have a clear majority in the Parliament. That's surely scary for most traditional Parliamentarian politicians and for me, too.

However, with the final numbers, coalitions look rather transparent to me now. Victorious ANO may create a two-member coalition either with Okamura's SPD or with ODS or with the Pirates (102/200 deputies only; communists are too weak for that). Or numerous other coalitions with 2 (or more) coalition partners exist.

From the viewpoint of ODS I voted for, the strongest party of the politically mature people in these elections, there are two obvious choices: either the 2-member coalition with the criminal Babiš's ANO which seems enough. Or a wide coalition of everybody except for ANO and communists. Note that ANO and SPD have a majority in the Parliament so you simply can't exclude both. I would prefer the wild rainbow coalition without ANO and communists. That will obviously be controversial because of the inclusion of Okamura's SPD, the "multicultural fascists", but the parties simply must deal with the new reality. I have virtually nothing against Okamura – except that he will be too irritating for too many people in the world.

Well, there could be even more attractive "opposition agreement #2" models I am almost enthusiastic about. Okamura and/or commies and/or social democrats could get the Parliament and tolerate the minority government of ODS+TOP+STAN+KDU and maybe Pirates, or something like that. ;-) When I look what's numerically plausible, my frustration changes to some hopes if not experimental enthusiasm. This could easily become a Pyrrhic victory for ANO.
Luboš Motl v 4:02 PM
Share