Catalonia enjoys independence while it lasts

Minutes ago, Catalan lawmakers approved the independence of their new, Catalan Republic. The ballot was secret – which will make it harder to punish the lawmakers for "sedition" or their "anti-imperial heresy". 70 lawmakers voted "leave", 10 voted "stay", 2 blank ballots, 53 (People's Party, Socialists, Ciutadans) absent during the vote. 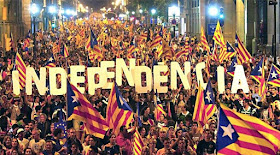 I do believe that the gradual approach of Prime Minister Carles Puigdemont has been both wise and responsible so far. Everyone could have seen that they really wanted to negotiate and avoid dramatic steps but they were threatened by Article 155 – indeed, it was only a "threat" so far because the Spanish Senate hasn't approved it yet – and given this mostly unprovoked threat for basic autonomy of the region, it makes sense to defend the region by the full-blown independence.

(Update: the Spanish Senate approved Article 155 minutes after the independence declaration, 214-to-47.)


Lawmakers and demonstrators in the streets exploded in euphoria. The happiness may last only for hours or days, of course, because Spain may move to quash all these efforts, like it did a few times in the past. The lawmakers in Madrid may confirm the activation of Article 155 and Spain may deploy a puppet government as well as some brute force.


But I believe that lots of people from somewhat larger countries – who like to mock all small and even medium-size countries – heavily underestimate how difficult it may be to restore obedience on a territory comparable to Catalonia. If you're a Spaniard or an American, you may look at a map where Catalonia looks like a tiny piece of land, much smaller than Spain or America, and you may laugh at this small size.

However, the real-world Catalonia is still a territory comparable to Belgium in size. And the population is comparable as well – it's exactly in between Czechia and Slovakia. When you land somewhere in Catalonia, chances are that you need to walk some hundreds of miles to get out of the Catalan Republic. And on your two-day trip, you will be surrounded by lots of people who take the independence very seriously.

According to some dominant Spanish constitutional perspective, the independence is invalid. But it may be more important that lots of the people – and probably a majority – in Catalonia have embraced a different perspective in which the decisions of their representatives are those that matter for their lives and the rule of law as they see it. They will behave as if the independence declaration has been a very real event. The independence is primarily a change of thinking inside millions of Catalan heads. The events have surpassed a certain red line where everyone who cares about peace should realize that with some humane assumptions, the changes have been basically irreversible. 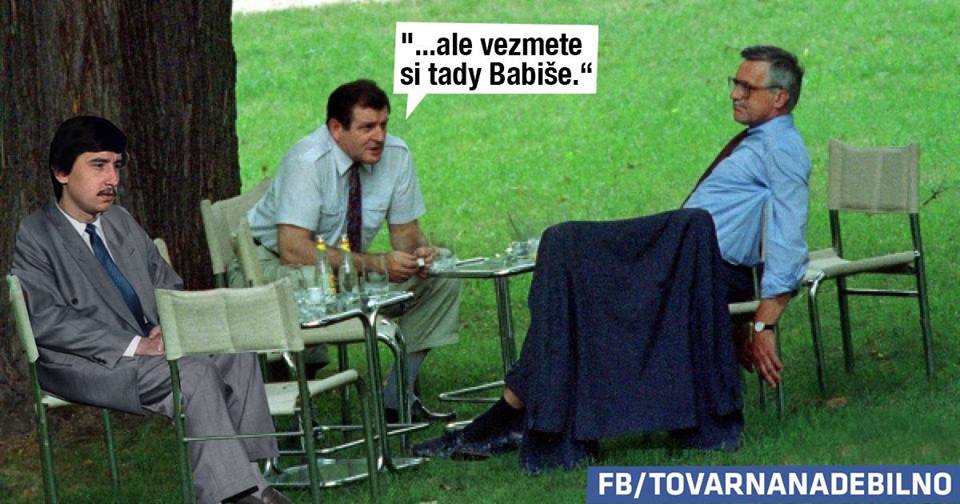 Once the Slovak parliament declared the independence in July 1992, things were clear for us, Czechs. Václav Havel resigned as the Czechoslovak president on the very same day. No one has thought about any violent suppression of the independence efforts. Real negotiations had to begin and they began, indeed. On the edited photograph above, Slovak PM Mečiar told his Czech counterpart Klaus: "But you will take this Babiš over here!" ;-) And stupidly enough, we did take him. Incidentally, Babiš wants to become a PM of a minority government of his puppets and "experts" only – after he noticed that no one wants to team up with him, indeed. It's a solution that looks unstable but cleaner from many viewpoints. I believe that a long-term existence of a government without confidence would be unconstitutional.

If Spain decides to invalidate the independence declaration by brute force, it is very likely to face lots of unrest. Extra problems may arise. Spain lives a parasitic life, sucking €2,000 a year (of net transfers) from every Catalan, including infants. And parasites like that often desperately want to continue in their activities. But if one neglects certain changes of the conditions on the ground, Catalonia may very well become a big pain in the rectum – a source of the financial loss for the whole Kingdom of Spain.

The declaration of independence may be described as a clear escalation of the situation relatively to the conditions e.g. during the October 1st referendum. But the conditions may escalate further. Every action will have some reactions. The desire for independence is almost guaranteed to grow is Spain acts in an increasingly tough way. How far are you willing to go, Spaniards and Spanish trolls and fascists who sometimes contribute your comments? Are you willing to murder lots of Catalans just because they consider their national representatives to be more legitimate than those in Madrid?

Have you really listened to yourself? It makes perfect sense for the citizens to trust their nearby politicians – whom they elected in elections they took more seriously than other elections and who speak the same language. You may worship your constitution but there are certain laws of Nature, physics, and human psychology that stand above all the Spanish constitutional laws. It may be a grave mistake to overlook that the Spanish constitutional rules aren't sitting at the very top of the hierarchy of laws.

Update on Saturday: Occitanie, a top-level region in France, the only non-Spanish region adjacent to Catalonia (which makes it more relevant than others; it also includes the whole historical "French Catalonia"), has called for peace talks between Catalonia and Spain.
Luboš Motl v 4:27 PM
Share