I think that the number of readers of these posts on Czech politics is rather low but someone asked me. OK, we have elections on Friday and Saturday. Here is a forecast:

The top 8 parties above the 5% threshold are shown above. Sadly, the Party of the Free Citizens and similarly reasonable right-wing, new party of the Realists won't get to the Parliament, it seems, and they will subtract lots of votes of the wise right-wing voters. Also, STAN-the-Mayors have a slight chance to get to the Parliament, they're a more modern version of KDU discussed below.

What are the parties?

The winner is expected to be ANO, at 25% – it may be much more or much less. The name means Yes, and it is an acronym of the Alliance of the Pissed-Off Citizens. The owner of this movement is the second wealthiest Czech citizen (€3 billion, like Trump), former Slovak communist secret police snitch (now officially again) Mr Andrej Babiš. Everyone else in the party or movement is just a corrupt puppet so if and when someone physically removes Babiš, ANO will be dead, too.

Babiš, an owner of agricultural farms, production of chickens, chemical companies, newspapers, reproduction clinics etc. (through a trust) constantly plays the role of an outsider although he was the ultimate insider – top communist cadre – during communism; he's controlled the party bosses in the 1990s; and he's been the finance minister in recent 4 years. He repeats slogans that "everyone is corrupt but he can't be because he's a billionaire" while he steals billions in assorted subsidies, e.g. for his disgusting yellow rape (biofuels). He is being prosecuted right now for the €2 million EU subsidy fraud to fund his "Stork Nest" luxurious farm. He has done lots of other things that violated the laws, abused his power to destroy his competition etc...

At any rate, he's obviously the hero of the bottom 25% of the nation – mostly because he is a primitive just like them so they vote him as a member of their subspecies.

He has no ideology, he only cares about increasing his power and wealth. So he copies the majority opinions of the citizens on all these questions he doesn't care about. So he is somewhat skeptical about the EU and is considered to be a horror for the Brussels folks – although I believe this idea is wrong because it could be trivial for Brussels to turn him into a puppet. He is against the Euro, against the adoption of migrants – because a majority of Czechs is. He wants a much tougher terror against small businesses while collecting taxes and stuff like that. The EU may be dangerous but his desires to turn Czechia into a dictatorship seem much more urgent to me now.


Social democrats are shown second, at 12.5%. They may be at 10 or 15 percent, too. These days, it's somewhat problem-free mainstream moderate left-wing party. My attitudes to the social democrats have never been as positive as they are now. The party of the current PM is against the migrant quotas but somewhat in favor of the EU and perhaps even the adoption of the Euro in a couple of years. But they're obviously not pro-EU fanatics – it was their government that led Czechia that is still considered a naughty boy by the would-be continental leaders in Brussels.


Communists are around 10%, it's their standard hard core they haven't lost since 1989. They haven't reformed themselves and have been "de facto banned" from the government since 1989. The leader Filip said some surprising nice things about the self-employed people recently. That was one of the reasons I would consider them for the government now – because any government may be too hard if you reject too many things. Communists want a referendum about the EU and NATO membership – which is likely to mean that they mostly want to leave both.

SPD isn't the German social democracy. It's a nationalist party led by a true Czech patriot, 100% Czech Tomio Okamura whose one parent is half-Korean, half-Japanese. ;-) He wants to leave the EU as soon as possible and ban Islam. His result may actually be much better than 10%. Almost all others would label him a far right populist etc. Okamura is pro-peace, pro-secession in Catalonia, pro-annexation of Crimea, anti-sanctions, I actually agree with him in most foreign policy questions and not only those. Well, when it comes to some of his reshuffling of taxes and support for families, I think he's insane. But he's also able to talk to Babiš authoritatively. My main problem with him is that he would be harassed by the system and the EU too much.

ODS, the Civic Democratic Party founded by (later) ex-president Klaus in the early 1990s, will also approach 10%. I plan to vote for them – I have done so in every Parliamentary elections since the fall of communism. They're somewhat lukewarm relatively to Klaus but against bureaucracy, for lower taxes, against migration quotas, against the adoption of the Euro, against some excesses of the European Union, but not planning immediate withdrawal from the EU, with the exception of Václav Klaus Jr, Klaus' oldest son, who has been a very active Euroskeptic and was attacked by TOP 09 today for that reason.

A serious enough song, The Moldau by Bedřich Smetana with some lyrics sung by Karel Gott, which has a nationwide spirit.

Pirates are estimated to get 8.5%, almost certainly mostly young people and IT geeks. They have some of the modern policies, some of the crazy policies, a big focus on IT. But more importantly, they may be considered compatible with ANO, a potential Komsomol of ANO which is important.

KDU is written as 6.5% above. Christian Democratic Union, the Czechoslovak People's Party. This centrist party still builds on believers in Moravia. My attitude is totally lukewarm but they are a guarantee of some "old-fashioned rural sanity". The center-right party may also be viewed as the most "pro-German" party in Czechia – they like gestures of friendship with the Sudetenland organizations and other things. For this reason, they're also among the rather pro-European parties. It's not a big problem for me now but it could become a problem in some more dramatic situation.

TOP 09, guessed to have 6% and at a certain risk that they will fall below the fatal 5% threshold. From my viewpoint, the biggest positive is that they're the most unambiguous enemy of ANO of billionaire Babiš – they are also against Zeman which is not that positive from my viewpoint. The negative is that TOP 09 is the most fanatically pro-EU party. They just ran an ad showing a fake news report about Klaus Jr (see above) who just became a big fish in the Parliament and started Czechout, while realizing that it may make us 30% poorer. TOP 09 is clearly the party of the Prague Café, the globalist politically correct self-described elites. So imagine all the typical "mainstream" things from the EU or the U.S. including the welcoming of the migrants, insane Russophobia, and other things.


OK, you see lots of parties although those near the threshold may be added or subtracted.

Assuming that ANO will dominate as the graph indicates, coalitions may be those with ANO and those without ANO. These two classes of scenarios primarily differ by the fate of Mr Babiš: In scenarios with PM Babiš, he will be the dictator of Czechia, in the scenario without him, he will probably spend years in prison instead. Those scenarios without ANO would have to ask almost everyone to participate. The other parties would like to expel the communists and SPD, i.e. nationalist Okamura. But my maths suggests that at most one of them could be expelled on top of ANO.

Coalitions led by ANO could include social democrats and perhaps KDU which would mean the conservation of the status quo – except that Babiš would probably become the prime minister. However, social democrats as well as KDU say that they can't imagine PM Babiš, given his ongoing criminal adventures.

So ANO would have to look elsewhere. Communists also verbally reject ANO – because ANO is right-wing for them, a strange reason – but they could cooperate. The coalition of former communist agent Babiš and the communists would be a nightmare for people like me.

ANO could also cooperate with Okamura, SPD, the nationalist populist. Perhaps the Pirates could be added to the mix. I don't really like it too much, either.

ODS, the party I vote for, could agree to join the coalition with ANO although ODS also verbally rejects a government with Babiš now. In that way, they could hopefully regulate his excessive anti-business policies and abuses of power.

Just to be sure, I am not voting according to Czechout because I don't think that the "immediate withdrawal" from the EU is a good idea right now. If there were some urgent reason, almost every party would consider a Czechout referendum, anyway. When it comes to general capitalist policies, EU attitudes etc., ANO is OK enough but Babiš's dictatorial and big-brother style is just unacceptable for me.

So God bless us. 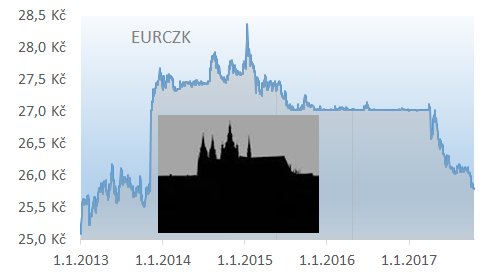 Currency: In comparison to the Euro, the Czech crown has strengthened by some 5% since the April 2017 cap removal, and touched 25.71 per Euro, not far from the exchange rate before the interventions began in November 2013 (the cap used to be 27.02 per Euro, the most widespread plateau in the graph above). By doing so, the Czech currency has completed the technical "Prague Castle scenery" pattern (clever terminology by J. Vybíral from ČSOB AM). Look how incredibly smooth, safe, and almost monotonic the strengthening of EURCZK since April 2017 has been. This really was a deal of the year. I expect further strengthening (especially because the impatient speculators are already gone, and all the 2017 dividends in CZK have already been converted if their recipients want it at all) but needless to say, the degree of certainty is decreasing because of the 5% strengthening that has already taken place.
Luboš Motl v 2:42 PM
Share