The events accompanying the Catalan independence referendum match my expectations rather accurately. I surely expected batons and rubber projectiles – because without those, the riot police would have very little chance to make a difference. It's still disquieting to see the actual pictures and scenes where actual peaceful citizens are beaten. 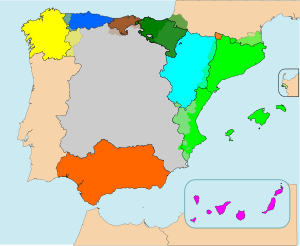 Catalonia's secession is a done deal now but after having seen the pictures, I recommend the independence for the other colorful regions as well. U.N. peacekeepers could broker it. The treatment of nationalities within Spain is simply broken and it will probably remain broken even after the Catalan exit.

Julian Assange's Twitter account contains a remarkable collection of the Spanish police brutality – which already exceeds the riot police's violence against the students in Prague in November 1989 – which was enough to ignite the Velvet Revolution – by orders of magnitude. Pensioners are beaten, losing blood, including old ladies. A loyal dog was manhandled. Girl's fingers were broken one by one. Man is attacked again even on his walk to ambulance. So far 337 injured people (17:48: over 460, new updates 761, 844... jihadists in Edmonton are losers, indeed); they're urged by the Catalan government to complain at Mossos. Look what happened when a Catalan cop dared to ask the Civil Guard to calm down. More interactions between cops of 2 kinds. More. Or what the Civil Guard, in its own propaganda video, calls a proportionate response to the provocations. Windows of schools are being violently broken by the Civil Guard (it was where the president was supposed to vote in the morning; he and 10/11 of regional ministers have already voted successfully; the last one, the health minister, enjoys the big day, too LOL). Lots of rubber bullets (in fact, big rubber green balls), batons against citizens including those firefighters (the human shields) etc.

Having passed exams from hydrodynamics (Pascal's principle!), I knew that the crowds would be able to push the police in the desired direction. I also knew that most of the polling stations would just work – and an hour ago, 70% of them just worked fine. (Update 14:40: a huge majority of stations work, officially 96%.) Their boxes may be stolen by the Spanish police later during the day. (The RT live broadcast has covered both places – the very violent ones as well as the totally ordered and affable polling stations.) There are big battles about logistics. The police went so far that they disabled the Internet around many polling stations. People defied it by sharing the mobile data etc. It's not clear how they will deal with the stolen ballots, shut down election websites, risk of double counting (the Madrid government disabled the census), and other things. It will almost certainly be impossible to say that the referendum will have obeyed all international standards. ;-)

The main deviation of the reality from my expectation concerns the Catalans' behavior. I surely expected them to be more violent. They're totally peaceful – I would say unnaturally peaceful. Well, if a nation is too peaceful, it may have some problems to liberate itself.


If our prime minister organized such a brutal police crackdown on something so innocent, I am pretty sure that he would be forced to resign. But I acknowledge that the Spaniards are a less civilized nation than we are so what would happen here doesn't have to happen there. It's their business. However, it's clearly no longer their business to decide whether Rajoy will keep on ruling Catalonia – the feelings of national identity have almost certainly at least doubled during this intense weekend so far.

Also, I agree with Julian Assange that the European Union should start Article 7 against Spain – the same one it wants to start against Poland where no reasons exist – because of its violation of Article 2. But the European Union isn't really "my" institution I trust so it's not really my business to advise them, they wouldn't listen to me, anyway. The sudden tolerance of the EU towards this government-sponsored violence clearly affects my opinions about the EU, however, especially after its fanatical assault on countries where nothing comparable has taken place for half a century.


To show that my opinions aren't that original relatively to mainstream opinions of Czechs, here is the translation of top upvoted comments at iDNES, a center-right news server:

A few weeks ago, I didn't understand the independence too much. But when I see how the Spanish government behaves, I understand it. They do these things even though it would have been more than enough for them to simply ignore the referendum.

Oh well, yes. Catalonia is such a Spanish wallet that the central government likes to open to take some bucks from it. How these poor men in Madrid would flourish without the wealthy province, nobody knows.

The attitude by the Spanish government is wrong. One thing is not to recognize a referendum, another thing is to make a referendum impossible. Catalans have the right to participate in a referendum (they even have their Parliament) even if the referendum isn't classified as valid.

When only 40% of Catalans want secession, the central government has nothing to be afraid of.... ;-/ Or, perhaps, the numbers could be a bit different?

So we're repeatedly fed by the reports that the whole referendum is illegal. That it has no – but really, totally, utterly no – legal validity.

So why is the Spanish government and the European politicians so thrilled about it? Why are they so terrified by the citizens' throwing some pieces of paper into some boxes? Why has the whole Spanish police stood on its feet for a whole week, seeking for printing ballots and confiscating computers?

To send the police against its own nation is the worst thing that the men in Madrid could have done.

This move – to prevent the referendum – has no potential to become a good solution. Because those who wanted secession will solidify their stubbornness further and those who were undecided will become angry about Madrid as well. Moreover the protests are evolving towards violence.

I would say that because of the central government's steps, even those who didn't want to secede will join the independence movement.

To send the police against its own citizens – that's the EU-style democracy. [EU flag] [thumb down]

Let us ban the referendums, democratically and according to Brussels. What the people want is extremely dangerous. :-D

So according to the champions of the ban on the referendum (it's not in the constitution), the Tibetan folks are out of luck, too. And that would be the case even if China became democratic. Because not only the Tibet folks but all the Chinese would be voting about the dissolution (according to the Spanish constitutional template) and it's clear what the result would be.

I am amused by the parroting of the central government's meme that Catalonia ultimately doesn't want to secede at all. But just to be sure, let's ban the referendum there, too.

Cool, let's see, it's democracy in practice! We're lucky that they're not further to the East, Putin would already be blamed for that... This is really dense, Franco is only laughing...

By the police violence, the Spanish government hasn't increased its potential for the future too much, I guess...

I didn't think that in our advanced and democratic EU, it's such a crime to go to peacefully vote about anything... and that governmental leeches or bloodsuckers are so scared of the vote. ;-/

Will someone keep on claiming that the democratic system of government works inside the EU? The EUrodictatorship of the Fourth Reich has only improved the technology of power so it can do these things with the activists from NGOs instead of brown shirts with batons. The goals remained the same – dictatorship.

Brussels should democratically ban the referendums and problems would be over. :-D

Can you imagine the reactions if something similar were taking place in Poland? The EU speeches about the threats for democracy would be heard from miles away...

Every nation has the right for self-determination, Catalans just like Russians in Crimea. But that doesn't mean that they automatically have the right to "tear themselves" apart.

One dead person will be enough... And a huge unrest will unfold. Why didn't they allow them to vote? The outcome would represent the will of the majority and one could negotiate afterwards... Calmly and rationally... This is just adding gasoline to fire.

And when did the Spanish policemen use rubber projectiles against immigrants climbing fences from Africa? Or perhaps they wouldn't dare to use them against such men? I see, only their own citizens may be targeted by such projectiles...

They want to express their opinion in the referendum and the police and national guard is sent against them. Spain hasn't changed since the Generalisimo Franco's era at all, democracy over there is only apparent. The truth is that the referendums in the EU are very dangerous and will be banned. What would happen if people in Czechia also wanted a referendum about the departure from the EU? Either the referendum would be banned, or the police or army would be called.

But the valid constitution of a democratic country doesn't allow any government to suppress the opinions of its citizens, e.g. in the way we're shown in Spain right now. The events that are taking place in Catalonia may be described as the display of the opinions about the right for self-determination. But it seems that this right only exists at those places where the so-called West finds it convenient.

This is how democracy looks in the European Union. The people cannot express its opinions. Viva Catalonia!!! The EU [three angry smiley faces]

I don't know why they didn't allow the referendum to take place when a majority wanted it. The result would be to stay in the Spanish union and things would calm down. In this way, the Spanish government will only harm its position, whatever the result will be.

Here you have an argument for all those who say that Czechia should be moving in the Western direction. The suppression of the right for self-determination, no-go zones, terrorism, this is the dreamed about West. But we are belonging to Central Europe, aren't we? And that's where we should remain. To go along our own democratic path and guarantee safety for our kids and grandkids. [Czech flag]


Parliamentary Letters, a nationalist hard left server which automatically provides space for all active politicians, has run a poll. 98% think that the Catalans should be allowed to participate in a referendum about a possible exit from the Spanish union.


Numerous (but not "most of") Czech politicians, starting from ex-president Klaus, have denounced the violence. Klaus and colleagues urge the EU to chastise the Spanish government for the suppression of civic rights and departure from the rules of democracy – along similar lines why Poland and Hungary were criticized (for much less good reasons).


Meanwhile, the Spanish government and its fans live in an alternate Universe. Vice-president Ms de Santamaría said the cops were professional and their performance was proportionate. PM Rajoy said that there has been no referendum in Catalonia today. As the readers of the Express point out, this statement (that there was no referendum) is an admission that he sent the tens of thousands of riot policemen over there for no good reason, just for the fun of injuring a thousand of representatives of the few million people and scaring everyone else.
Luboš Motl v 1:17 PM
Share