As some media reported, Californian constructor Mike Hughes – MadMikeHughes.com – canceled his Saturday experiment which he scheduled to prove that the Earth was flat.

The cancellation was justified by some refusal of the Bureau of Land Management to give him a permission for the area.

I find this guy unbelievable in many respects. The interpretation of the rocket launch that could be used to argue that the "Earth is flat" isn't clear to me – I am not even sure whether I want to listen to such a planned argumentation. But what strikes me is the incredible combination of this utterly ludicrous, anti-scientific belief in the Flat Earth; with his demonstrable status as an extremely skillful guy, basically a rocket scientist.


Missy Cooper, Sheldon's twin sister (whom we currently know as a cute girl in Young Sheldon as well – I actually think that the girl looks significantly smarter than the adult Missy and must have absorbed some of young Sheldon's wisdom so there is a mismatch between the two sitcoms LOL), has told her brother that she often brags that her brother is a rocket scientist. Sheldon was insulted. A rocket scientist? He is a theoretical physicist. She could very well say that he was a toll taker at the Golden Gate Bridge. ;-)

And if you think about Mike Hughes, "rocket scientist" looks like an insult, indeed.


Hughes would be an excellent example for the Darwin Award – the Darwin Award is given to the people who kill themselves under such remarkably stupid circumstances that their stupidity proven in this way guarantees that their de facto suicide has increased the average IQ of the mankind, and therefore the ability of the human race to succeed in the Darwinian struggle for survival.

He probably wanted to shoot himself in his own rocket and take some pictures that show the Earth to be flat. (Ordinary balloons could get him higher and it would be safer.) This "ball Earth", as he calls the competing concept, is a fairy-tale spread by freemasons such as the so-called astronauts and others. Unless he is just kidding, that's really cute. Some people we know are remotely close to this kind of conspiracy theory reasoning.

In the sane people's world, it's so easy to prove the "ball Earth". Wait for the lunar eclipse to see that the Earth's shadow is round. Or look at the ships in the ocean. They disappear from the horizon at some moment, when their distance \(d\) from you is roughly the geometric average\[

\] This rule may be easily derived from two similar triangles in a picture because two ratios are equal:\[

\] You may assume that the height is much smaller than the Earth's radius. Is there a missing factor of two somewhere? I don't think so. On this picture, it should be \(h_1/d_1 \approx d_1/r\).

When you're looking from a 6-meter height, the (much lower) ship disappears when it's 6 kilometers away – because the Earth radius is 6,000 kilometers. You may literally see with your eyes that the Earth is a "ball" from a regular commercial flight. Well, the "ship" formula above is still applicable. You're 10 kilometers above the surface, so you can see some 250 kilometers away from yourself, but not further. Above Boston, you literally see the New York City near the horizon, and nothing behind it. 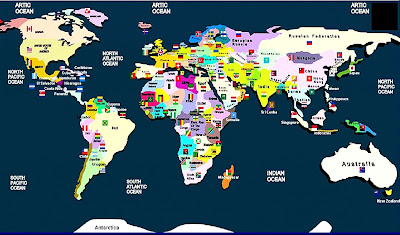 But I think that there's an easier way for you to deduce that the Earth is round. Just try to sketch the map of the world assuming it's flat. It must qualitatively look like the map above. Paris has some particular distance from London, Berlin, Vienna etc. You can draw the local, basically flat, maps of the smaller regions such as Europe and try to connect them into a master map of the flat world.

If you make a trip around the world, or at least combine the testimonies from many people who have been to many places e.g. near the equator, you may deduce the existence of the equator, which is a maximum circle around the Earth assuming the latter is a ball. OK, so you can draw a circle on the map of the world that is topologically a circle.

Now, if the Earth is flat, this equator must be a regular circle inside a flat plane, right? So this circle must have some center. It must be a pole which, as you can figure out, is approximately equally far from all points on the equator. Is it the North Pole or the South Pole? If you are Mike Hughes+ (whose IQ has been increased by 50 points), you will probably decide that the center of this circle is the Northern Pole – there's stronger evidence that the Arctic is about equally far from all points along the equator.

At any rate, it follows that the Earth cannot be flat.

More constructively, just realize that the strip around the equator must be a cylinder – you can sail around it – and try to add the additional regions of the Earth, starting from the subtropical ones, to your scheme of the world. It's obvious that as you go closer to the poles, the lengths should shrink, so the cylinder gets compactified to a sphere. Almost equally, check that the Northern Hemisphere and the Southern Hemisphere look basically like disks. And they're demonstrably connected at the equator which is a circle. So the two hemispheres must exist at both sides of a disk – and you should better make the transition smooth and round the Earth because the Earth doesn't seem to be spiky near the equator or anywhere.

Alternatively, just measure the directions in which the Sun or Moon or stars can be seen from various cities on Earth. You will see that all directions are represented – every city sees the celestial bodies in a different direction – which also proves that the Earth isn't flat because the direction would have to be the same everywhere if the Earth were flat.

And so on. There are lots of proofs. It's surely not difficult for an intelligent person – even a schoolkid – to become certain that the surface of the Earth is basically a sphere. The (spinning) ball Earth is difficult for the Saudi clerics, of course.

Now, if he really believes that the Earth is flat, what does he think about all these arguments or facts? Is it conspiracy? Is it conspiracy that you must adjust your watch because there are different time zones? Without the time zones, the noon could be at 6 am, 6 pm, or midnight 12 am at various places of the Earth? Are time zones conspiracy theories promoted by freemasons as well? How do they do it so that it looks like you need to adjust your watch to keep noon at 12 pm after a long flight? The whole flat Earth should be in one time zone, right?

OK, if he's really a nutcase who can't figure out these simple things, how is it possible that he has patents? And that he has built lots of cool machines and rockets? Can someone be so entirely dense when it comes to science – even basic schoolkid's science – but be so skillful at engineering at the same moment? Can his insane scientific view be explained by some quasi-religious belief? Does he need to believe the hardcore conspiracy theories for his psychological well-being?

This guy is mad (unless he just pretends so, for the sake of publicity) and it's obviously easy to choose him as a target. But I think that there are millions – and perhaps a majority of the people who want to have opinions about science – who are comparably mad and who just need to defend comparably mad propositions, although they're probably not as insane as Hughes' flat Earth view. The people who believe that we shall be killed by some climate change due to CO2 are comparable lunatics to Hughes. They say that the evil oil companies etc., not freemasons, are behind the cataclysm – but that's just a technical difference. The fundamental lack of logic and knowledge of basic facts are comparable to Mike Hughes' delusions.

Mike Hughes didn't get his permission but he didn't give up. His next plan is to fly next week. Good luck, Mike, you may need it.
Luboš Motl v 9:59 AM
Share