Stiglitz is right that the Bitcoin should be outlawed, for many reasons

The Bitcoin price has continued in its persistent, irrational mania that saw a 10% increase almost every day. Yesterday, it hit some $11,500 before it collapsed to some $9,300 within five hours. About one-half of that drop has been recouped.

The fever was on steroids and the trading volumes were huge. Some cryptoexchanges, starting from Coinbase.com (considered the the Americans' most important online wallet) and including the anti-Zuckeberg Winklevoss twin brothers' Gemini exchange, were down for a large fraction of their users. The traffic was huge (a factor of 8 higher than a June peak, Coinbase reported) and it's understandable that their infrastructure may be genuinely overwhelmed.

But you can't be sure it's the right explanation because there's unavoidably a competing one.


There were huge gaps in the Bitcoin price at various exchanges during the super-fever yesterday. That shouldn't be happening in efficient markets. The cryptocurrency markets are obviously extremely inefficient. Much of the trading is done by folks who don't care that they can buy the same Bitcoin at the same moment at a 3% cheaper price elsewhere. Or most of the traders don't have the access to several exchanges. Or they're afraid of something.


Yesterday, there was a slightly good reason why the users trading at several platforms – who could normally guarantee that the prices are basically the same everywhere – could have been afraid that they won't be able to complete the profitable trade at Coinbase. Or their accounts at Coinbase were blocked which contributed to the big gaps between the prices at individual Bitcoin exchanges.

Let me assume the latter possibility. Coinbase just selectively blocked those that would normally be balancing the markets. Coinbase could have done it by itself. Coinbase probably owns some Bitcoins and other cryptocurrencies that belong to itself and they may be traded through other exchanges. When there is a gap between prices of the Bitcoin as traded at Coinbase and elsewhere, Coinbase itself can make profit out of it. For example, it buys a cheaper Bitcoin from (not banned) Coinbase clients, and simultaneously sells some Bitcoin at (more expensive) other exchanges. Also, Coinbase may be artificially increasing the gap by blocking the accounts of the likely buyers/sellers when the price looks high/small, and then make profit out of this elevated gap.

Tonight's episode of The Big Bang Theory is the Bitcoin Entanglement. A two-minute sneak peek. A seven-year-old video will reveal a secret about Leonard and Penny.

Lots of the cryptocurrency fans repeat the statement that they want a world where they're independent from the banks that are evil and rob their clients. But in reality, the cryptocurrency exchanges such as Coinbase are much more aggressive than regular banks – and much less regulated – when they are robbing their clients. The selectively locked accounts may be a part of it. But on top of that, the regular transaction fees that Coinbase takes from its users are just huge.

Yesterday, an economics memorial Nobel prize winner Joseph Stiglitz appeared in the MSN TV station and said that the Bitcoin is a pure bubble that serves no useful social function, perhaps except for its being attractive as a potential tool to circumvent the laws, and that's why the Bitcoin should be outlawed. I surely agree with this reasoning. The lawmakers and governments should be picking the policies that are beneficial for nations as wholes and the unbacked cryptocurrencies such as Bitcoin really aren't. (In the TV segment, they also agreed that the Bitcoin price is determined by the Marxist theory of value [I think the host meant the insane claims "Bitcoin is valuable because electricity has been wasted for it"] – it's smoke and mirrors. I have said the same thing a few days ago.) 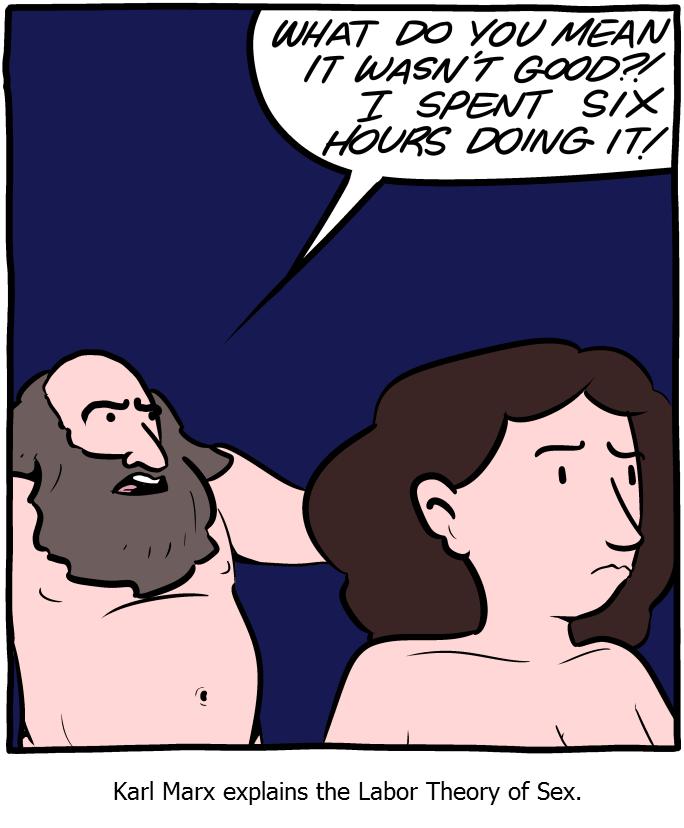 Marx explains his Marxist=labour=Bitcoin theory of value. She tells him: So much for all your highbrow Marxist ways.

The governments are waking up and they start to do their duty. One of them is the fight against tax evasion.

Some sources suggest that the yesterday flash crash was actually caused by the IRS' partial success in the court. The IRS has been trying to get the data of the Coinbase users – mostly tax evaders – for a year. Last time, the IRS wanted all the data and a judge said "it was too much to ask". Coinbase has some 13 million users and a huge fraction, almost certainly millions of them, have made some profits they didn't tax. The judge decided that at least in the case of the big fish, the IRS has the right to get all the data.

So some 15,000 Coinbase users who have sold the Bitcoin (etc.?) for more than $20,000 a year will see their complete data including social security ID and the Bitcoin addresses to be handed to the Internal Revenue Service. I think it's completely justified and a similar procedure should be applied to much greater fractions of the users and not only in the U.S.

Many of these people celebrate themselves how great and smart they are by using some would-be futuristic technology – which hasn't really improved from the 2009 Nakamoto paper and software much. But in reality, they are rather ordinary criminals. In particular, they evade taxes almost just like every other tax evader. I would find it insanely unjust if some people were allowed to avoid taxation just because of some bogus justifications that they're pioneers of some "new technology".

On top of that, it's really trivial to find most of these people. A judge may simply see sufficient evidence that some users at a cryptocurrency exchange were evading taxation (almost all of them are! Only some 800-900 have reported Bitcoin income!) and he may be pushed to order the exchange to give all the relevant data to the IRS. The anonymity is immediately gone. The IRS may try to trace the payments to/from those Bitcoin addresses and/or demand explanations from these people what they were actually doing with those Bitcoins.

One of the thousands of propositions by the Bitcoin advocates that simply shock me as incredibly stupid is the idea that this technology is capable of escaping the hands of the government – the IRS, police, central banks as regulators, and others. I just find it stunningly stupid. You may work with a Bitcoin wallet which has lots of encrypted data and those are supposed not to be known by the government and stuff like that. Great. But as you may have forgotten, you're still a human being in the real world. When you are suspected that you could have done something illegal that involves some cryptocurrency, you may still be visited by police and ordered to maximally cooperate. You may just be forced to give them your Bitcoin addresses or the wallet. They may point their guns at your fudging stupid head and if you do something really "bold", they can make a hole through your fudging stupid head just like they can do to everyone else in an analogous situation. And it's still a crime, perjury, if your testimony in the court is false. The violators of laws who use the Bitcoin seem to arrogantly suggest that they have placed themselves above all these things – the arrogance and stupidity of this paradigm simply drives me up the wall.

None of these truly fundamental things is being changed by the cryptographic subtleties at all. They're still the events that decide about the "ultimate" power in the country over financial transactions and their legality. Whether you encrypt something – or whether you encrypt your signatures in some ledger that you irrationally share with others and whose transactions of "something" aren't backed by anything – you are still a person who is expected to obey the law and cooperate with the law-enforcement authorities that fight crime. So you have encrypted something in some way – you may just be forced to show them how you did it and effectively decrypt what you encrypted. So the encryption is just an irrelevant children's game. Transactions may appear to be less visible and comprehensible but if you're pressed by the police, you simply have to demystify them.

On top of that, while some of the pure Bitcoin transactions could be made anonymous in principle, especially when the mixers are being used, a huge majority of the trades isn't really anonymous. The exchanges generally remember who bought or sold what. And they can assign the human identities to the accounts at the exchanges, and therefore the Bitcoin addresses, too. So what's the big deal? All the cryptography is just an irrelevant childish game from the viewpoint of the society's law. The underlying events are nothing else than the old-fashioned pyramid games or Ponzi schemes, the old-fashioned tax evasion, the old-fashioned drug trafficking, and lots of other things.

The authorities whose task is to fight against crime should realize that they're simply facing the old-fashioned foes that are just "decorated" by a ton of vanity and the self-importance may be pretty easily removed, especially if the authorities hire some folks that understand how these things work. And once it's done – and it seems very likely that we're already entering this stage – all the crimes may be fought more or less as effectively as they were before.

But as Stiglitz says, the Bitcoin pyramid game doesn't really play any socially useful role. The main attractive characteristic is that the cryptocurrencies have a potential to evade taxation and become invisible to the government in many ways. I don't claim that all Bitcoin traders abuse this characteristic but many of them do and everyone may. However, this crime may still be fought against – it may be more expensive because the law enforcement organs may have to hire expensive experts. The main effect from the viewpoint of the society as represented by the government is that law enforcement may be getting harder or more expensive and if it's so, the whole "industry" should be judged accordingly. It's a net liability and it should be outlawed as a whole.

Even if this stuff isn't fully outlawed, something simply has to be done about the regulation of the cryptocurrency exchanges and other players in this market. There will surely be lots of lawsuits against Coinbase which made it impossible for millions of users to sell when the price was high and buy when the price was low yesterday. What will the courts do with such lawsuits? The cryptocurrency trading is almost completely unregulated. When you're dealing with Coinbase or anyone, you should probably expect not to be guaranteed anything. They may rob you in almost any way – and the mechanism with the selective locking out is a rather "fancy" way.

But should it be like that? The daily trading volumes are some $10 billion for the Bitcoin. It's 3 orders of magnitude smaller than major Forex markets etc. but it's rather high, anyway. Should the governments and courts say "let them play" and allow the bigger fish like the cryptocurrency exchanges to rob their clients arbitrarily? After all, the clients have basically agreed that it's a game without guarantees and the exchanges may screw them in lots of ways. Or should the internal disputes between the exchanges and their clients be solved in a similar way as disputes between banks and clients?

These questions may be delicate. But the question about the relationship of Coinbase clients and the IRS has an obvious answer. The IRS is being robbed so it should obviously defend itself. The IRS hasn't agreed to become a player in a brave new world where it can be robbed arbitrarily by someone as long as this someone says to be a pioneer of new technologies.
Luboš Motl v 7:52 AM
Share