Wall of grief: Putin is courageous to question Stalin

Days ago, Vladimir Putin unveiled the Wall of Grief, a sculpture by Georgy Frangulyan which will be a memorial to the victims of communism in Moscow – the first such a memorial in Russia. See the pictures.

The sculpture shows many people – probably victims of Stalin. In this sense, it's analogous to the memorial to the children of Lidice, a Czech village razed by the Nazis. Well, the kids in the Czech sculpture look a bit dull and too similar to each other while the people in the Russian sculpture don't quite even look like people at all. But I know, it's arts. For me, the political message is more important.


Putin gave a speech over there. They need a memorial for them to learn some lessons so that these atrocities aren't repeated. Just if you have doubts about it, Stalin is responsible for 20-60 million deaths, almost certainly the highest number for any leader in the world history, beating Hitler. See a Stalin-Hitler debate in the Wenceslaus Gay Rodent Talk Show for details. ;-)


In that 2011 parody interview, the host tells Stalin that he has won a nice bronze medal in the Russian poll looking for the "most outstanding Russian character". Isn't it too little, given your abilities, Mr Stalin? Well, it actually was too little.

According to the same June 2017 poll among the Russian citizens, Stalin came at the top. 38% chose Stalin as the most outstanding Russian figure. Putin got silver with 34%, tied with Alexander Pushkin. I don't understand why the sum of the numbers already exceeds 100%. In previous years, Lenin, Peter the Great, Gagarin, Tolstoy, and Catherine the Great were among the top scorers but they generally dropped.

You know, given the fact that Stalin is still ahead of Putin, I think that Putin needs some courage to approve a memorial basically admitting that Stalin was a terrible criminal. And I think that this is great news. As Russia Feed points out, this gesture by Putin collides with the claims that "Putin is rebuilding the Soviet empire". And none of the Western mainstream media celebrate the fact.

I surely do. I think it's great. I think that Putin will be capable of defending this gesture in front of the Russian citizens. But it's still great he's doing it.

There have been various accusations saying that Putin was behind some disappeared people, perhaps murders. I can't be quite certain about each of them – I tend to be skeptical but I am not certain that these accusations are bogus, either. But even if those accusations were true, you may still put them in the perspective. Putin has managed to strengthen Russia to a comparable extent as Stalin but he has surely not murdered 20-60 million people, has he? Putin's number, if it's nonzero at all, was vastly lower – by many, many orders of magnitude.

Aside from the popularity of Stalin in Russia, there are other troubling widespread opinions. For example, when Russians are asked about the 1968 Warsaw Pact occupation of Czechoslovakia that ended the Prague Spring, the era of the socialism with a human face, 1/3 says that it was a great thing, 1/3 says it wasn't, and 1/3 is neutral. That's a pretty ambiguous attitude to a clearly illegitimate occupation. Well, you almost certainly don't get a 1/3 support for the occupation in Czechia these days. But the source of the difference is obvious.

In fact, when I compare it to other events and situations, I think that the "totally neutral answer" by the Russians isn't so catastrophic. It may have been even worse. And when you see how many people approve of the political trials in Madrid, violent suppression of the Catalan independence efforts, you could easily conclude that Czechoslovakia is treated relatively well by the contemporary Russians. ;-) 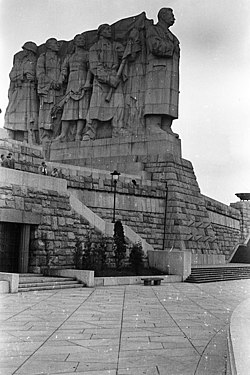 The anti-Stalinist sculpture I started with is pretty large but it can't compete with the Stalin Monument that used to stand in Prague-Letná, a flat plateau upon the Moldau River, between 1955 and 1962. It was not only the largest representation of Stalin in the world; it was also the largest sculptural group in Europe. These days, the place is occupied by the giant metronome. In 2003, the metronome was swinging between "Yes" and "No" to attract the people to the referendum about the EU membership. Maybe the metronome should have stayed in the opposite side, after all.

So you know, I am not enthusiastic about everything in Russia. I would probably prefer not to live there although my visits (2 times 2 weeks) were pretty nice. I am not even happy about the dominant political opinions about many things that exist in Russia today. But Russia is a large country with a less advanced history of recent centuries in comparison with us in Western and Central Europe. What you want to get should be realistic. Turkey, Laos, or Brazil aren't perfect according to the Western standards, either. And Mars seems to be less hospitable to life than Russia – Russia is never praised for that. I think that virtually none of the chronic critics of Russia are realistic. I think that almost all of them are unfair. In fact, I think that almost all of them are irrational fanatical racists who just decided that Russophobia must eternally be a pillar of their spiritual life, much like anti-Semitism was an ideological pillar in Nazi Germany. It's terrifying to watch the absolutely insane "witch hunts for links to Russia" in the U.S. This or that guy with a Greek name has met a Russian professor at some point so he must surely be burned at stake! Holy cow.

Putin represents not only progress and sensible policies in Russia – and in the international diplomacy, most of the time. In many contexts, he's better than lots of his Western counterparts even if you avoid the "given he is Russian" disclaimer. It's just wrong to suppress good news about Russia which is why I decided to write this blog post about a seemingly irrelevant sculpture.
Luboš Motl v 5:56 PM
Share