An hour ago, the Wired has published some thoughts by my ex-colleague and occasional TRF guest blogger Lisa Randall


Lisa Randall: 'It's important for people like me to keep doing science and not get distracted'


At the beginning, she deflects a question on Donald Trump but she returns to it at the end – and makes it clear that she is in favor of the climate hysteria and all kinds of misguided regulations. She knows very well that I am convinced she is wrong on every single "standard political" question of this kind.

But her text primarily contains lots of the "unusual ideas" about the science and society which I, for some reasons, find at least equally important. And I agree with a vast majority of her comments.


At the beginning, she says that there is a strong anti-scientific sentiment around us – I surely agree – and she also sensibly blames much of it on poor education at many places – I agree with that, too. On top of that, people increasingly choose to live in opinion bubbles and aren't able to accept that other people may have different opinions. They aren't able or willing push themselves to think from the viewpoint of someone else etc. True.


However, she also says something else I have said in the past. Scientists don't have the responsibility to do something about the poor education. The research scientists' job is research. It's not the same thing as teaching or P.R. and many great researchers would suck at these other activities. Research is often very difficult and requires lots of concentration. Any distraction may dramatically weaken or undermine the scientific research. It's very true and important.

She points out that scientists are being selectively picked as the folks who have the responsibility to save the world and/or fix all the intrinsically political problems with our society. Why aren't the business people or lawyers demanded to save the world in the same way? Well, sometimes they are. But scientists are much more likely targets of such things. This reflects some fundamental misunderstanding of what science actually is. Science isn't the mission to save the world. Science is the enterprise pursued to find the truth about the world. (Maybe the picture of scientists as the saviors of the world is a meme that was successfully spread by Hollywood.)

On the other hand, she's happy to have some communication platform – and a reasonably high number of followers on Twitter who sometimes read an increasing number of her tweets. ;-) Well, there's some tension here, I think, because Twitter is mostly another distraction for a scientist, isn't it?

While she is a standard supporter of the climate hysteria and other postmodern left-wing causes, she says something about these matters that I find important and true as well. She says that the climate change dispute and similar things isn't really about science now – it's about politics. Thank God. Many of us have been saying similar things for a decade or more. Ex-president Klaus wrote a book with this basic point in 2007. Yes, the opposing opinions about the climate change and whether something should be done about it primarily reflect people's different politics, not any real deep controversy about science. There isn't any deep science behind the climate panic. 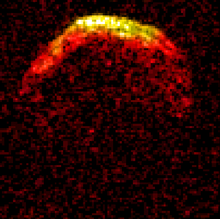 An hour ago, I had to investigate another weird story sent to me by my father – Extrastory.cz, a tabloid has claimed that "scientists have calculated the date of the doomsday". It's 2880 AD, you may quickly find out, and the story about the notorious 1950 DA asteroid.

I mention this story because Lisa has also been interested in such cataclysmic cosmic collisions.

OK, if you search for 1950 DA and 2880, you will find some basic data, starting from the Wikipedia article on the rock (whose diameter is almost a mile). In 2002, the probability of a collision on March 16th, 2880 was claimed to be as high as 17%. The interest was revived in 2014 and The Telegraph was probably the first outlet that ignited a huge wave of hype that was copied all over the place. The most recent calculated probability of a 2880 collision is some 0.012% – it is about 99.99% certain that there won't be a collision. It's only known that it will be about "one million of miles from us or less". Bad Astronomer Phil Plait was a lone voice that tried to bring some sanity to these hysterical claims in 2014. And you still find many users who attacked him for "daring to downplay" the threat. You will look terrible when the Earth is destroyed! ;-) Well, even if he looked terrible in 2880, he will probably not care much at that point. He just rationally talked about the scientifically calculated odds. The probability of similar events is never quite zero. It doesn't mean that it's right to pick a cataclysmic language about every such threat, does it?

NASA's Center for Near Earth Objects has a page on the 1950 DA asteroid and they also say that the probability of the collision in 2880 is just "comparable" to the summed probabilities of all other background collisions during the same 800 years. So March 16th, 2880 is an "elevated date" when a doomsday could occur more realistically than any other date in the third millennium but it doesn't change anything about the average background risks at the relevant, millennial scale. The probability of the impact simply is small, its being high at one point isn't a rational reason for concern, and similarly large asteroids hit the Earth once in millions or tens of millions of years and nothing has changed about these numbers.

Extrastory.cz seems retarded to publish this hysterical story in December 2017 – three years after the latest wave. But a tragedy is that my father is a textbook example of the mindless consumers of similar rubbish that fills the newspapers and especially women's lifestyle tabloids such as ForWomen.cz, his most popular reading (especially because health "science" stories like "you need to eat lots of fat and steaks to lose pounds" etc.). Whenever I just suggest that I know much more about these things than the editors of these female lifestyle magazines and tabloids, I am actually in a huge trouble. Do I actually suggest that women (like those writers) practice a worse science than men? Well, I don't just suggest it. It's an obvious fact. Regardless of their sex, they're not doing science at all and most of them are actually dumb as a doorknob. I can only write these comments in English – it's mostly safe because he only knows how to say "five speed" in English. Like many others, he simply has absolutely no idea about science, what it is, and whether it's something else than journalism. He doesn't understand the difference between parroting some hype from the media and doing scientific research. In the recent 40 years, I couldn't bring him an inch closer to understanding what science is and how it works. He has been trained to feel offended by such things that are something else than the parroting of some leader or official slogans. He has never listened to me about science for more than 1 minute. He's been trained as an apprentice and has no full-blown high school so he may be an extreme example but he's still rather representative of hundreds of millions of people.

Many folks basically want to destroy science in the proper sense of the world. It boils down to aggressively expanding opinion bubbles and their complete unwillingness to even consider the idea that someone could have good reasons to think very differently about some topics than they are used to. Even though Lisa is a leftist, I think that there's some invariant network of ideas that she sees almost identically. I have often stressed that our civilization actually requires more isolation of the scientists from the distractions and bullying by the laymen etc., not "more democracy and tighter contacts" between the two worlds. The integrity, purity, and the absence of fear are basic prerequisites for science and it's good that at least Lisa seems to agree.